Metrics such as carriers’ schedule reliability are worsening and cargo rollover rates are still on the rise. By the former metric, the average delay for containers increased from one day in January 2020, to more than five days in January 2021. Ocean Insights is cautioning that it may take several more months for supply chains to return to some semblance of normality.

Ocean Insights points to internal travel restrictions imposed by Chinese authorities, requiring domestic travelers to quarantine for 14 days after traveling, as a new bottleneck for global shipping and supply chains.

Chinese governments are calling for citizens to stay put and “celebrate in place,” keeping factories open to offset the seasonal decline in factory output during the Chinese New Year.

However, even with all these efforts in place, getting those products to market will be a challenge. Most truckers have opted to go home for New Year -- making them subject to mandatory quarantines and unable to drive. In some regions, up to 95 percent of truckers will be unavailable, with the worst-hit regions in the south.

These conditions will choke factory-port connectivity starting in about two weeks, with inventory backups lasting for months.

“The shipping lines have said that the backlog of cargo will be cleared after Chinese New Year, and that will likely occur as the levels of deliveries from factories drop off, but supply chains may take several more months to return to some semblance of normality as inventory, now trapped further up the supply chain will need to be cleared,” said Ocean Insights’ Chief Operations Officer Josh Brazil.

While overall rollover rates have increased, the major Asian ports in Singapore and Tanjung Pelepas saw no increase in rollovers from December 2020 to January 2021, while Shanghai, Hong Kong increased by just 1 percent and Busan decreased 1 percent. Port Klang in Malaysia remains an outlier with an 11 percent increase in rollover cargo from 55-66 percent month-on-month. In Europe, Antwerp and Rotterdam saw increases of 4 and 5 percent respectively within the Hamburg-Le Havre range.

Ocean Insights calculates the rollover ratio for carriers as the percentage of cargo carried by each line globally that left a transshipment port on a different vessel than originally scheduled. 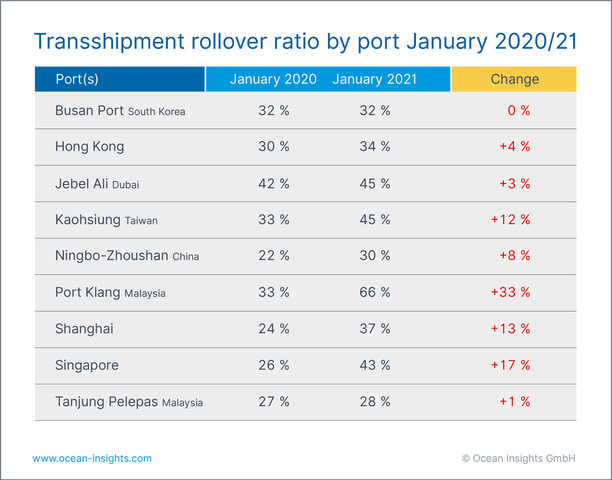 In terms of the number of changes to delivery dates (ETA), the Asia to US West Coast trade lanes showed the largest increase from an average of 1.7 ETA changes per shipment in January 2020 to 3.9 by January this year.

While Asia to Europe cargo ETA changes per shipment averaged 1.4 in January 2020, they increased to 3.1 a year later.

By these metrics, the average delay for containers increased from about one day in January 2020, to more than five days in January 2021 (Carriers’ Schedule Reliability is a measurement of delay from port to port.) 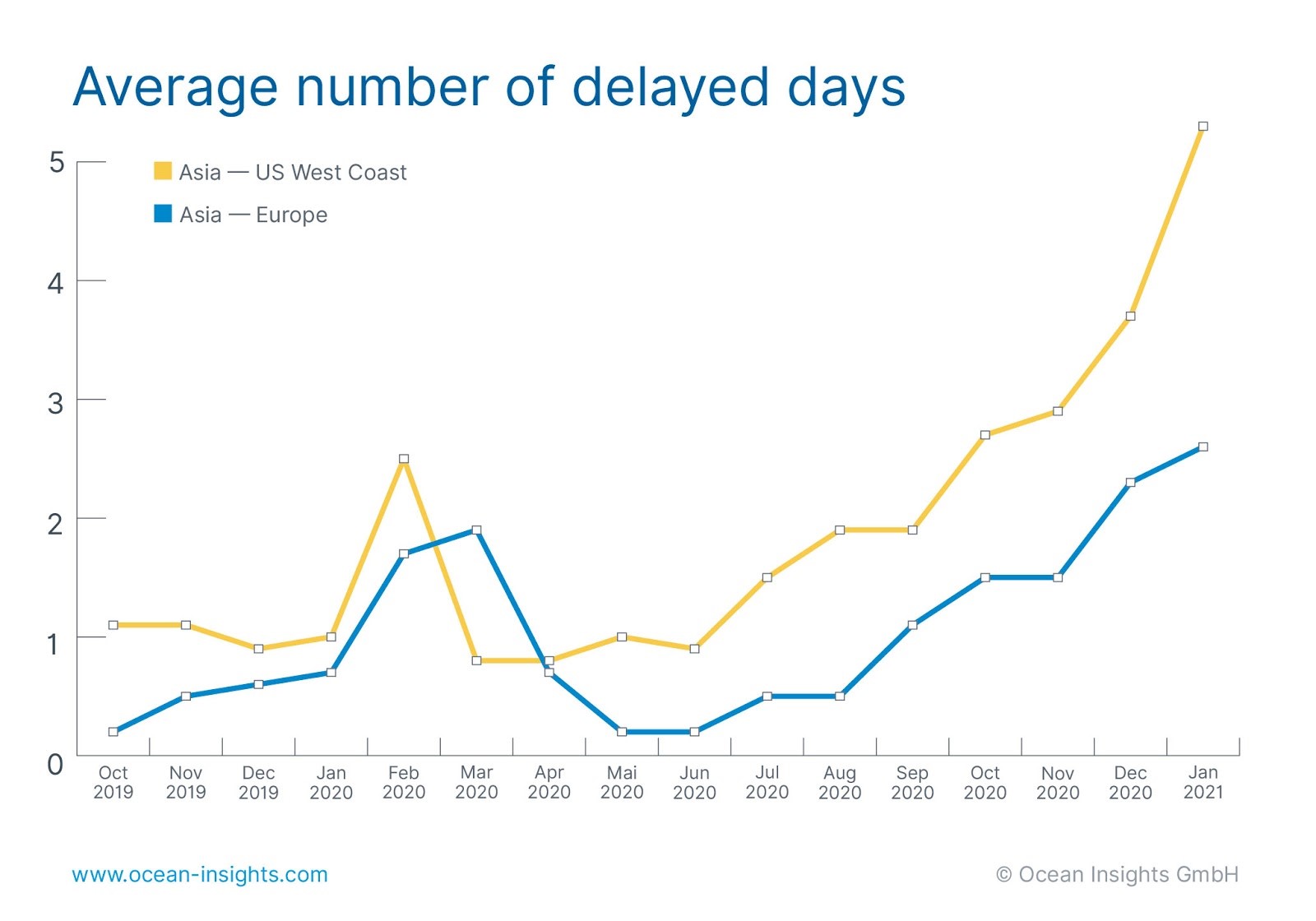 Vessel operators have so far had a mixed month with Maersk seeing a 5 percent increase in rollovers, reaching 38 percent while its alliance partner, MSC, has been static at 29 percent since November of last year.

CMA CGM, by way of contrast, has steadily increased its rollovers from 44 percent in October 2020 to 52 percent in January this year. While the biggest decrease month-on-month goes to CMA CGM’s subsidiary ANL whose rollover figures improved from 56 percent in December to 49 percent in January. 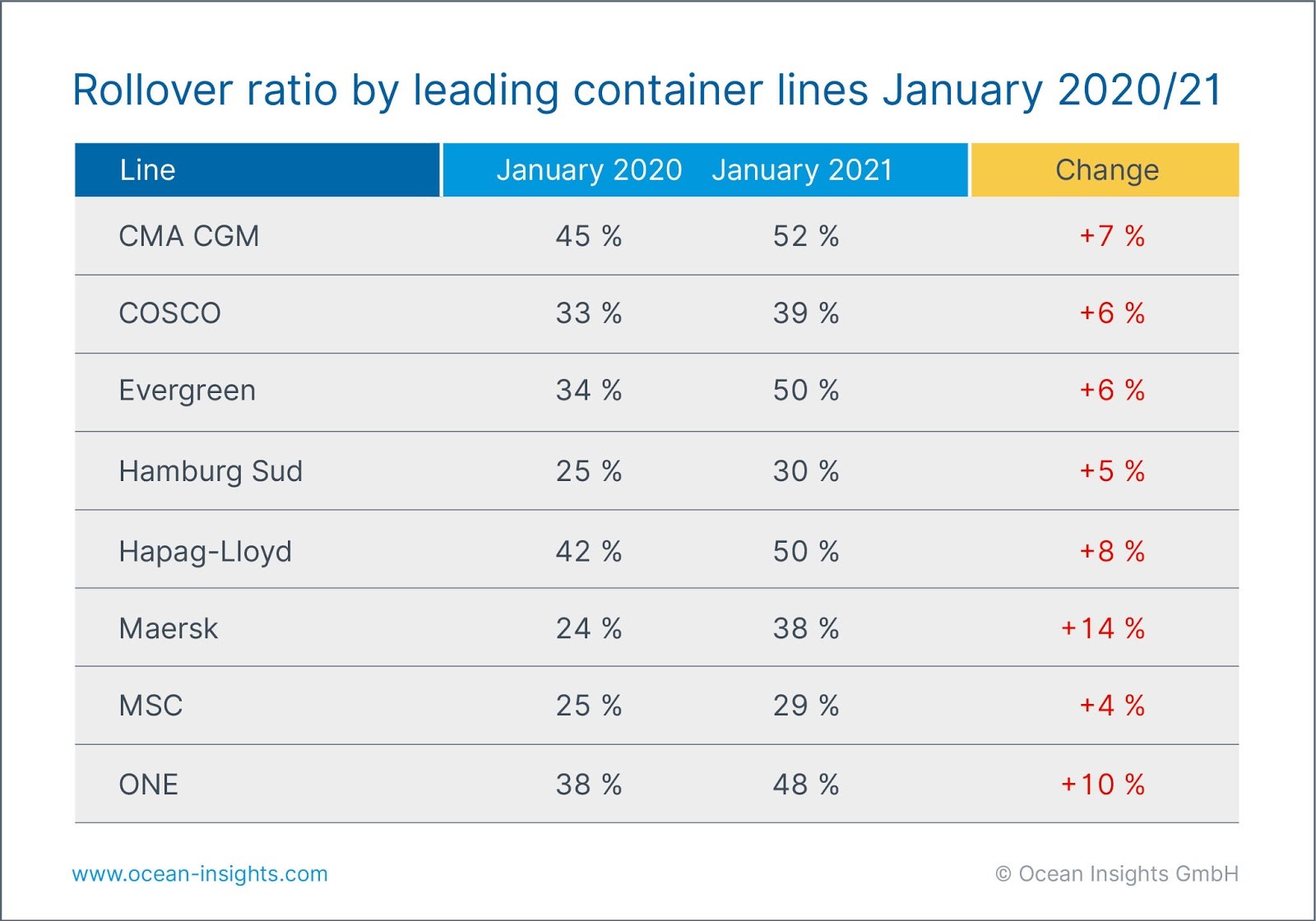