In 2014, the Rand Corporation launched a comprehensive survey of sexual assault and sexual harassment in the U.S. military. Over the intervening years, it has released additional details from the survey, and on Friday it disclosed command-level statistics. The new report reveals a striking pattern: almost all of the U.S. Navy commands with the highest estimated risk of sexual assault against women are aboard ship.

"Of the 15 highest-risk installations for Navy women, 13 are ships or clusters of ships . . . Our model estimates that more than 10 percent of all women experienced a sexual assault at each of these high-risk installations over a one-year period," Rand concluded. For comparison, the estimated prevalence rate of sexual assault against women in the United States (as a whole) is roughly four percent per year, according to the CDC.

A shore installation, Joint Base Charleston, topped the list with an estimated risk of roughly 17 percent per year. Japan-based shoreside operations came in fourth at about 13 percent. However, all remaining entries on Rand's list of the highest-risk commands were vessels or groups of vessels. These included the carriers USS George Washington, Nimitz, Theodore Roosevelt, Harry S. Truman, George H.W. Bush, John C. Stennis, Abraham Lincoln and Ronald Reagan.

There are no ships on the list of the 15 lowest risk installations (below). 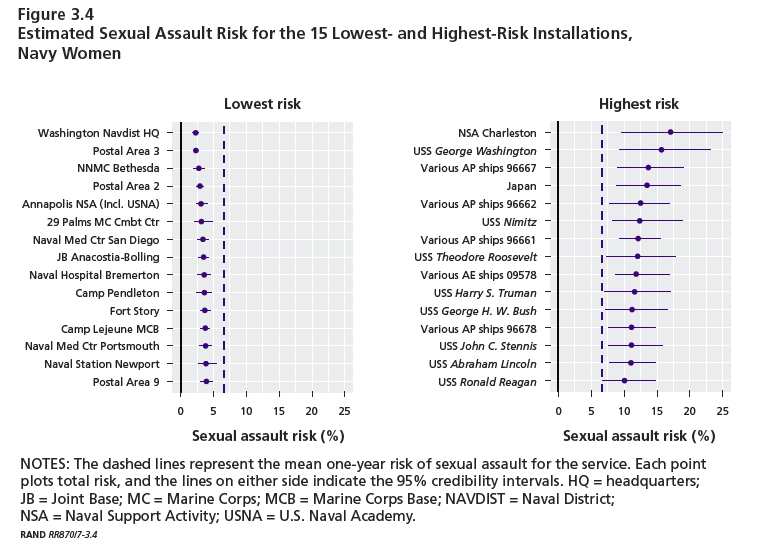 Rand was careful to note the limitations of its analysis. Its statistics are based on all occurrences reported by servicemembers. This means that the numbers cannot be used to differentiate between assaults that occurred on board or on shore, on duty or off, those perpetrated by civilians and those perpetrated by shipmates. The numbers also date back to 2014, making it difficult to determine whether any pattern identified at a particular command persists today. In addition, the clusters of smaller vessels used in the analysis were not grouped by location or type: all are ships, but a detailed analysis of the kinds of ships most at risk was not possible.