Some of the healthiest coral reefs in the world are located in the Gulf of Mexico, miles off the coast of Texas and Louisiana. Rising atop vast salt domes, three beautiful reefs – East and West Flower Garden Banks and Stetson Bank – are protected by NOAA’s Flower Garden Banks National Marine Sanctuary. Now, the sanctuary is proposing to expand to protect 14 additional reefs.

The proposal would increase the sanctuary’s protected area from 56 square miles to 160 square miles. These reefs provide habitat for economically important fish species, as well as for threatened and endangered species of sea turtles and corals. The sanctuary is asking the public to weigh in on this proposal now through July 3.

Flower Garden Banks National Marine Sanctuary was first designated in 1992 to protect East and West Flower Garden Banks. These banks are capped with extraordinary healthy coral reefs dominated by massive brain and star corals. In 1996, Congress added Stetson Bank to the sanctuary. Stetson Bank harbors a thriving sponge and coral community, providing habitat for fish and colorful invertebrates. Over the years, the sanctuary has ensured that these reefs have been able to thrive.

“The coral cover at the Flower Gardens is greater now than it was when I was studying them in the 70s and 80s,” says Dr. Tom Bright, an oceanographer after whom Bright Bank, one of the proposed expansion areas, is named. Bright was one of the first to document the Flower Garden Banks and seek protected status for them. The increased coral cover is “a good sign, because it means the reefs are hanging in there even when a lot of reefs worldwide are deteriorating.”

While the reefs within the sanctuary are prospering, others in the region are under threat. The Gulf of Mexico is economically important: it supports locally and globally important commercial fisheries, and is also a hub for oil and gas drilling. But these activities also place Gulf ecosystems at risk. Bottom-tending fishing gear and anchors can damage corals, while oil spills, drilling, and other oil extraction activities may threaten these fragile ecosystems. Global trends, too, like invasive species and ocean warming and acidification caused by climate change, pose a danger to the reefs. 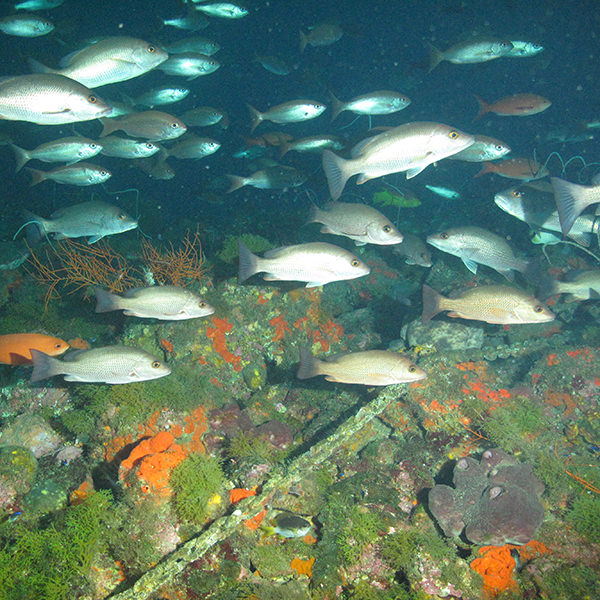 Debris left by humans can damage sensitive habitats. Here, a school of gray snapper, creole fish, and vermilion snapper swim over an anchor chain lying across a reef at Alderdice Bank. Photo: NOAA/UNCW-UVP Expansion of the sanctuary emerged as one of the top priority issues during a review of the sanctuary’s management plan in 2012. The Deepwater Horizon oil rig explosion, which resulted in the largest marine oil spill in U.S. history, also accelerated interest in expansion, with government scientists and non-governmental organizations urging additional protections for marine life and Gulf habitats.

“My hope is to keep these reefs in their current healthy state,” says Captain Scott Hickman, owner of Circle H Outfitters and Charters and chair of the Sanctuary Advisory Council. “Part of this expansion is about leaving it all better off than we found it.”

With that in mind, in June 2016, NOAA released a draft proposal for expanding the sanctuary. The sanctuary received a total of 8,491 comments on the proposal, with 74 percent in favor of expansion. After working closely with the Sanctuary Advisory Council and constituents, NOAA has created an updated proposal that includes 14 reefs and banks.

The proposed expansion would protect 14 additional reefs and banks in the Gulf of Mexico: Horseshoe, MacNeil, Rankin, 28 Fathom, Bright, Geyer, Elvers, McGrail, Sonnier, Bouma, Rezak, Sidner, Alderdice, and Parker banks. These reefs range in depth from 62 to 686 feet. They support a wide range of habitats, including basalt spires from ancient volcanoes and reefs in the ocean’s mesophotic zone, also known as the “twilight zone.” These reefs harbor extensive populations of black corals, octocorals, and sponges, and habitat for deeper species of commercially important fish.

“With coral ecosystems under threat worldwide from a variety of impacts, we need additional protection for these important ecosystems,” says G.P. Schmahl, superintendent of Flower Garden Banks National Marine Sanctuary. “The addition of new reefs and banks in the sanctuary will help increase the resilience of marine ecosystems that provide essential services for the Gulf of Mexico region and help support local economies.”

National marine sanctuaries are multiple-use areas committed to balancing protection and stewardship with the economic value these places hold. The expansion would extend existing sanctuary protections to these areas to limit the destructive impact of activities related to fishing with bottom-tending gear, ship anchoring, oil and gas exploration and production, and salvage activities. However, activities like diving and recreational fishing would continue to be allowed.

How You Can Get Involved

Members of the public can provide input on any aspect of the expansion proposal through July 3. Three virtual meetings are planned June 8-11 for the public to learn more about the proposal and submit comments in person. For more information, visit https://sanctuaries.noaa.gov/news/apr20/flower-garden-banks-national-marine-sanctuary-proposes-expansion.html.