Aviation history was made last week when Lt. Ronaqua Russell, a native of St. Thomas, U.S. Virgin Islands, became the first African-American female aviator in the Coast Guard to receive the Air Medal. The first of two ceremonies to honor her achievement took place at Tuskegee’s Moton Field Thursday, Feb. 21. This is the same location where, 77 years ago, the first African-American aviators in the U.S. Armed Services broke down racial barriers to earn their wings, and later go on to fly several heroic and critical combat missions in World War II. One of these Tuskegee Airmen was 1st Lt. Henry E. Rohlsen, Russell’s great-uncle and the namesake for the international airport in St. Croix. 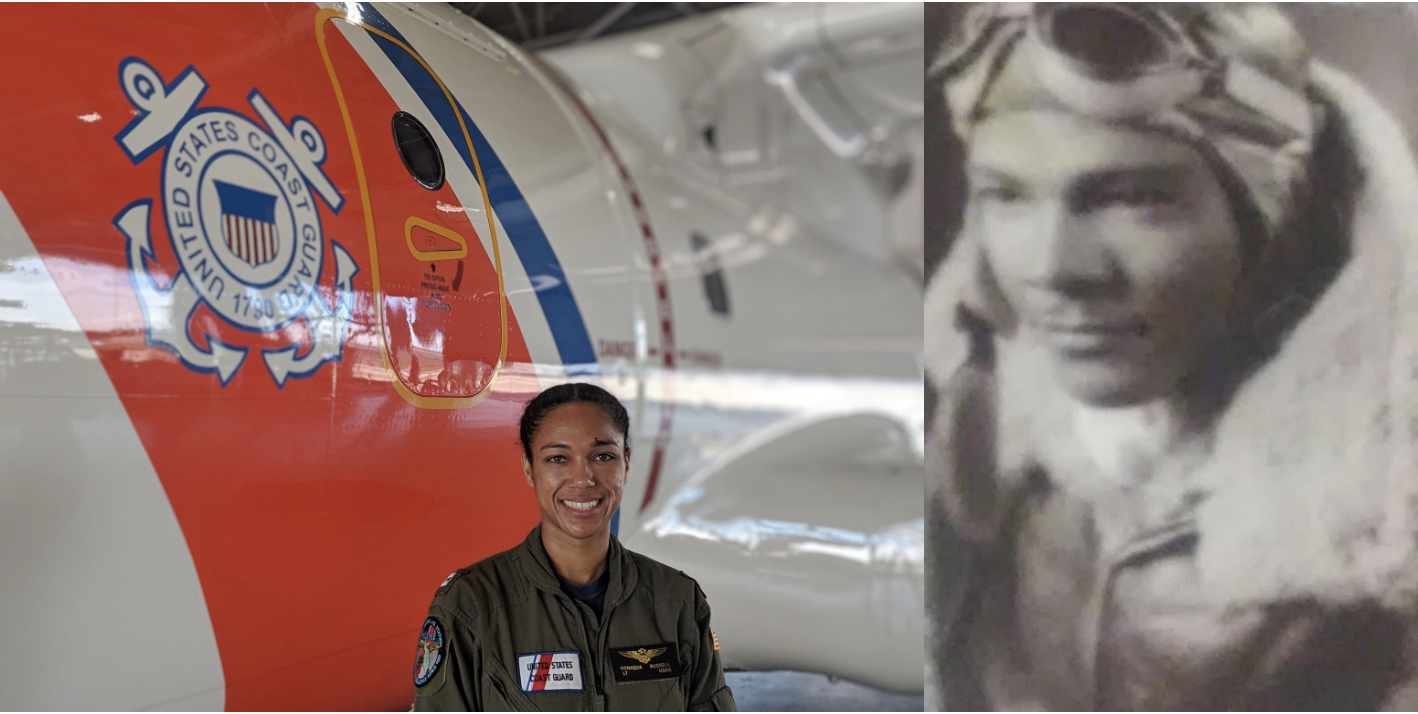 The Air Medal is awarded to an individual who distinguishes themselves by heroic or meritorious achievement while participating in aerial flight. Russell received this honor in recognition for her actions in response to Hurricane Harvey, one of the most destructive storms in U.S. history.

Having a knack for “being the first”, her Coast Guard HC-144 Ocean Sentry aircraft was the very first in the sky following behind the Category 4 storm’s destructive track. Russell along with Cmdr. Steve Pittman, the aircraft commander, piloted the plane through the outer bands of Harvey, hitting tropical storm force winds, and zero visibility conditions. Navigating landings on partially flooded runways, they delivered critical supplies and personnel in support of the ongoing rescue and port recovery efforts.

“Leaving Corpus there was not a single aircraft in the sky,” said Russell. “And on our approach into the Houston area there were only a few helicopters. It was eerily quiet.”

Russell continued flying supply and damage assessments for the next several days, and then served at the Incident Command Post for the Corpus Christi area helping from the ground as well.

Shortly after a week and a half into the response she couldn’t help but take notice of news reports of a storm brewing in the Atlantic. The eyewall of another hurricane was taking shape and looking to be much stronger and bigger than Harvey. A few days later, her home in the Virgin Islands would take a huge hit from the Category 5 Irma with winds topping off at 225 miles per hour.

Unable to evacuate, her family took shelter in their homes. Throughout the storm Russell tried to call her mom with little success, until one point a call finally started to ring. Then it picked up, for just a brief second she heard her mom’s voice … then the call dropped.

“This was a really tough moment, because I wasn’t sure if that was a cry for help, or excitement, or what,” said Russell. “I just knew I needed to do everything I could to get to them.”

After more than 36 hours of desperate attempts, Russell was finally able to reconnect with her family and verify that while there was some damage around the home, they were okay. That moment of relief was interrupted by another storm that started to build in the Atlantic, Hurricane Maria.

Russell took to the sky again, assisting with evacuations and large supply movements and doing all she could to help. Between performing these missions she simultaneously arranged for her mother and grandmother to get to Puerto Rico by boat, and fly commercially to Texas. Here they would live with her for several months while homes were repaired and the islands recovered. Her grandmother accompanied her when she transferred to her new duty station in Miami.

“She keeps me on my toes,” said Russell, about her grandmother Annette Chinnery. “I’m really a miniature version of her.”

Because her family could not attend the ceremony in Tuskegee they came to a separate one in Miami, Florida on Wednesday. 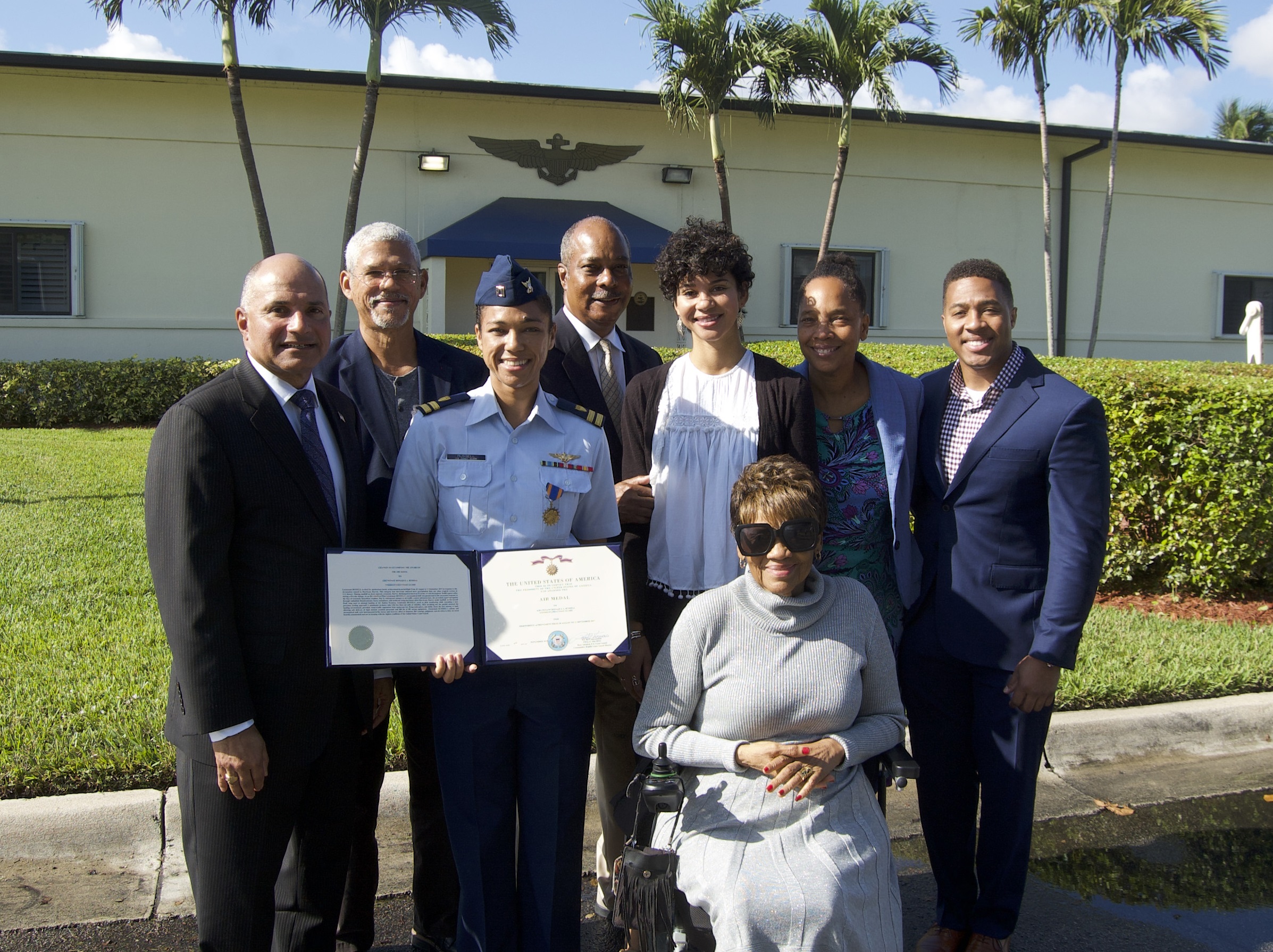 “It is an honor to be here, to see her get this recognition,” said Aquannette Chinnery, Russell’s mother. “I’m just very thankful that our family could come from near and far to be here, it’s a historic moment.”

While Russell attributes much of her drive and recent success to her family, there is another group affectionately called “The Fab 5,” that has played a huge influence too. This is the group of the five African-American women pilots in the Coast Guard. They were also all present at the ceremony at Tuskegee.

“We have all been the first at something,” said Russell. “And they have all mentored me and helped me get to where I am today.”

For centuries people have looked up and wondered about the possibilities, especially in difficult times. Whether it’s the blue vastness in daytime or the night’s star-covered dome, there is something about the sky that holds our gaze. People search this sky for hope and they can find it just off the horizon where you will see pilots like Lt. Ronaqua Russell, or like her uncle Henry E. Rohlsen, who carry that hope on the wings of the aircraft they fly, proving that the possibilities are endless.

Russell is currently stationed at Air Station Miami as an HC-144 Ocean Sentry aircraft commander. She is a 2012 graduate of the Coast Guard Academy and a 2006 graduate of Ivanna Eudora Kean High School in St. Thomas, U.S. Virgin Islands. 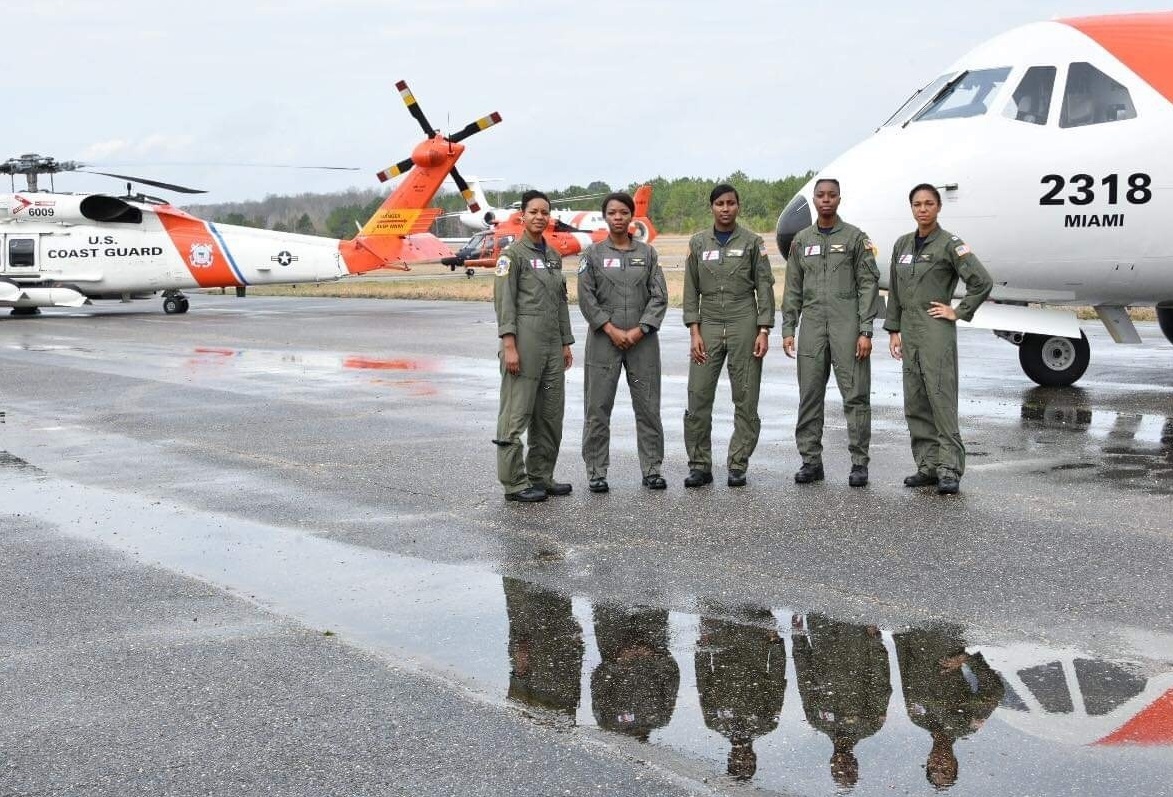 According to a 2017 Hurricane Season Summary published by FEMA, Hurricanes Harvey, Irma, and Maria are estimated to have caused more than $265 billion in damage to the United States. The Coast Guard’s search and rescue efforts in Hurricane Harvey alone resulted in more than 11,000 lives saved.