The government of Thailand has committed to develop a land bridge at the Isthmus of Kra, located between the Gulf of Thailand and the Andaman Sea. There is potential for such a land bridge to service certain types of bulk freight and container transfer operations.

The idea of building a canal at Thailand’s Isthmus of Kra dates back over two centuries. The objective is to offer a shorter sea route between Shanghai and Europe. At the present day, ships that carry east-west trade from China, South Korea, Taiwan or Japan to destinations located in India, the Middle East, Europe, Asia and the Atlantic coast of the North America sail either via the Strait of Malacca or Strait of Selat Sunda. A navigation canal built through the Isthmus of Kra could reduce sailing distance to several destination ports by up to two days.

While Thailand State Railways currently operates meter gauge railway lines, a wider gauge would allow for the operation of double stacked containers along the proposed dual-track railway line. The Hyperloop is one possible alternative technology that purports to be able to rapidly move containers between origin and destination, at competitive cost. Another option would be to engage railway engineering researchers to study possibilities involving quadruple track technology, where super-wide railway carriages of three-TEU widths by four-TEU lengths could each carry between two to three levels of containers, allowing 12 to 18 forty-foot boxes per car.

While Thailand’s meter gauge railway lines have served the needs of the nation well, a wider gauge offers advantages that include double stacked operation of containers. In North American operation, containers trains operating forward and mid-train locomotives can pull up to 150-freight cars that include the extended length container cars capable of each carrying two levels (or four TEU). Such operation suggests up to 600 40-ft containers per train. A future extreme concept railway technology involving parallel sets of tracks each built to the meter gauge, with the width of each super-wide car extending over the parallel sets of tracks.

Each of the super-wide railway cars would couple via central couplers. The central track on which locomotives travel would be meter gauge, with each of the outer tracks on which super-wide cars travel would also be the meter gauge. Following North American unit train practice, locomotives would be spread throughout each container train. This arrangement could move up to 900 forty-foot containers for every 50-car section of train, with a four-section train propelled by four-groups of locomotives moving up to 3,600 containers. University railway research departments would need to undertake further research to make the concept workable. 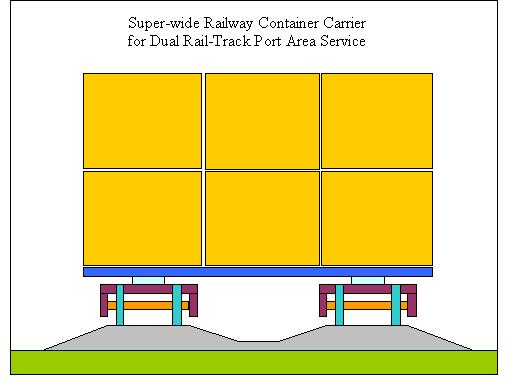 Illustration courtesy of the author

While a substantial volume of container transshipment occurs at Singapore and at nearby Tejung Pelepas, future maritime container trade is projected to increase over the next two to three decades. Future expansion of international container maritime shipping provides a basis by which to explore the possibility of trans-Kra container transshipment. Plans are already underway to develop a deep-sea port at Chumphon on the Gulf of Thailand and a companion deep-sea port at Ranong on the Andaman Sea, which could become the eastern terminus for future mega-size container ships of 28,000 to 35,000 TEU.

Smaller container ships sailing from southern China, South Korea, Taiwan, Philippines and Japan could arrive at a future Port of Chumphon and transfer containers at comparatively low per-container cost to a future trans-Kra land bridge. The containers would arrive at Ranong to be transferred to mega-size container ships that would sail to numerous Mediterranean and European destinations, and potentially to the U.S. East Coast. Future research could determine the extent to which increased maritime container transportation would enhance the competitiveness of trans-Kra container transshipment.