Marine debris is a pervasive issue in many coastal areas of the United States, where tourism and recreation account for $124 billion in gross domestic product.

To better understand the relationship between coastal tourism economies and marine debris, the NOAA Marine Debris Program funded a study to look at how the amount of marine debris on beaches can affect the behaviors of beachgoers and as a result, the economies of coastal communities that depend on tourism. This study reveals that doubling the amount of marine debris on beaches within these coastal areas would decrease the number of days visitors spend on those beaches. This decline in beach visitor days would result in fewer tourism dollars spent, and translate into a decrease in local jobs.

This study evaluated two types of economic impacts that result from the effects of doubling and the near elimination of marine debris on beach recreation: the loss or gain of recreational value to beach visitors, and the economic impact from reduced or increased spending on beach visits in four selected coastal areas across the contiguous United States. The study areas were the Gulf of Mexico beaches in Alabama, Atlantic Ocean beaches in Delaware and Maryland, Lake Erie beaches in Ohio, and Pacific Ocean beaches in Orange County, California. 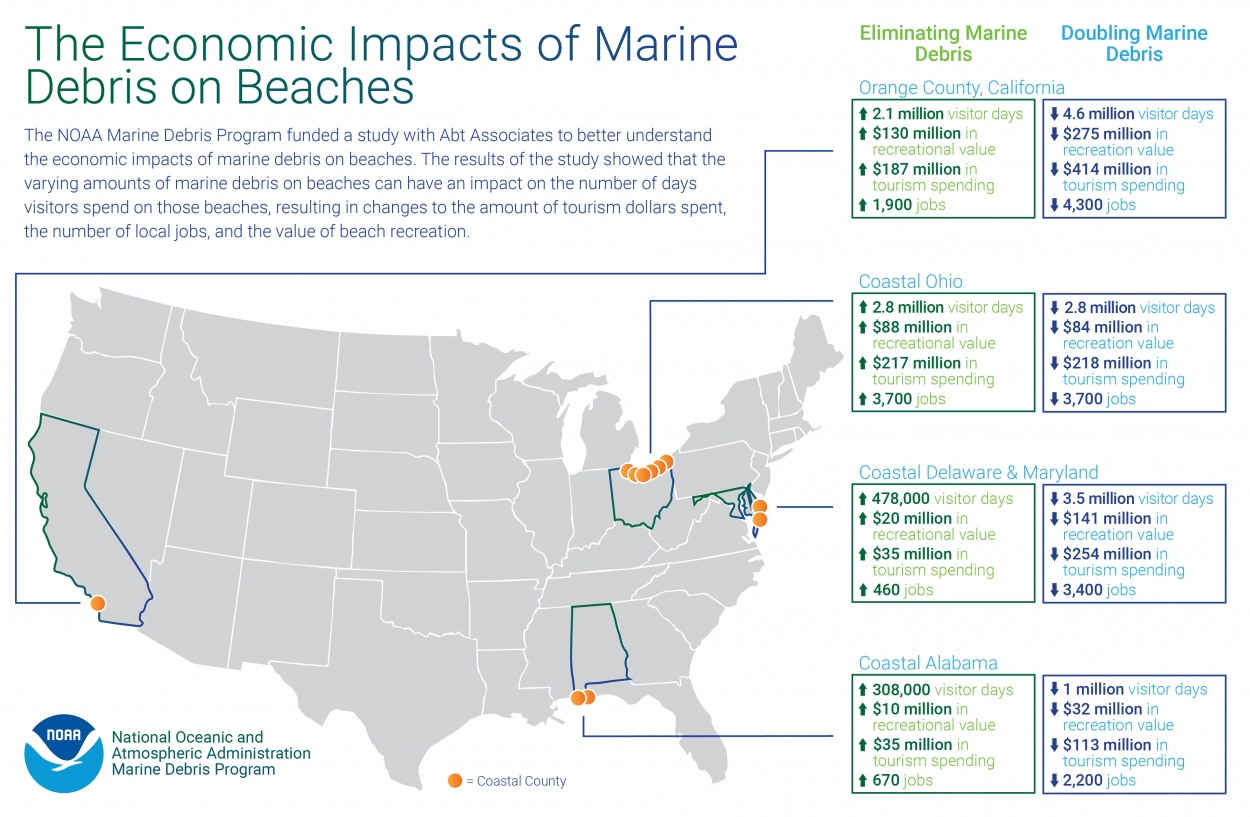 To understand the relationship between marine debris and recreational beach use, the study recruited participants at beaches in the four selected coastal areas and asked them questions about their beach recreation, their opinions about marine debris, and how their beach visits would change if there were varying amounts of debris on beaches. The data was used to understand how an increase or decrease in the amount of marine debris on the beach would affect the number of beach visits in each area.

Beachgoers in coastal Ohio were most responsive to the elimination of marine debris. Specifically, the study estimates that eliminating debris on Lake Erie beaches would generate roughly 2.8 million additional visits.

Beachgoers in Orange County, California were most responsive to a doubling of marine debris. The study estimates 4.6 million fewer visits under such a scenario.

The potential benefits from a decrease in the amount of marine debris on beaches were greatest on coastal beaches in Ohio. In these communities, reducing marine debris to almost zero was estimated to produce an additional $217 million tourism dollars spent in communities and over 3,700 jobs.

The potential economic losses from an increase in marine debris were greatest in Orange County, California, where doubling the amount of marine debris on beaches resulted in an estimated loss of $414 million tourism dollars spent in communities, and a decrease of nearly 4,300 jobs.

This study deepens our understanding of the economic impact of marine debris to coastal communities that depend on beach tourism and illustrates the importance of prevention and cleanup efforts. By preventing marine debris, we can stop it from ever entering our ocean, Great Lakes, and waterways in the first place.