The United States Coast Guard and its predecessor agencies have been blessed with the service of many determined and courageous women. One such woman was Lighthouse Keeper Ida Lewis, recipient of the service’s Gold Lifesaving Medal. 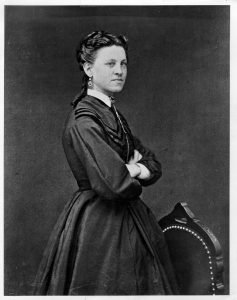 Idawalley Zoradia Lewis, known as Ida Lewis, is one of the best-known keepers, male or female, in the history of the U.S. Lighthouse service. She gained national fame at a time when most women worked behind the scenes with little notice or compensation. Overcoming the biases of the time through skill and professional ability, Lewis served unofficially as keeper of Newport, Rhode Island’s Lime Rock Lighthouse beginning in 1857, when her father, the official keeper, was disabled by a stroke. From 1857 until 1872, she kept the light and cared for her disabled father and a seriously ill sister. Lewis was finally appointed Lime Rock Light’s official keeper in 1879 and served there until she died in 1911.

An expert boathandler, Lewis made her first rescue when only 16 years old. It was noted by others that she could “row a boat faster than any man in Newport.” In 1881, she received the Gold Lifesaving Medal for the rescue of two soldiers from nearby Fort Adams. The men attempted to walk across thin ice from Lime Rock to the fort and broke through the ice into the frigid water. With only minutes before the onset of hypothermia, loss of feeling in their limbs and imminent drowning, the men screamed for their lives. Lewis heard their cries and ran from the lighthouse with a rope. She threw them the line while standing on the ice. In spite of the danger of falling through or being dragged into the water by the two men, Lewis managed to save both men–one by herself and the second with the help of her younger brother. 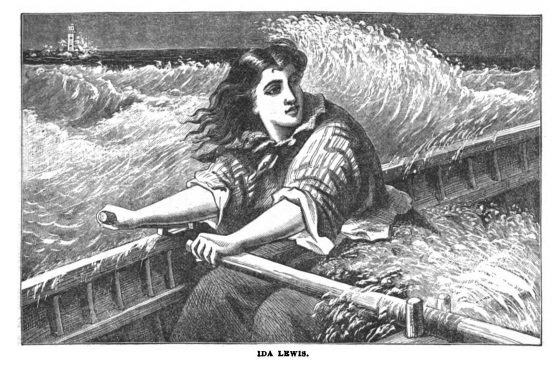 Lighthouse keepers frequently went in harm’s way to rescue those shipwrecked or in danger of drowning near their light. Lewis did so numerous times. Over her 54 years of keeping the light, Lewis was officially credited with saving 18 lives; however, other sources indicate the number to be much higher. In 1881, Lighthouse Board Secretary William Windom wrote Lewis that “the papers before the Department in this case, cite the instances of no less than 13 persons saved by you from drowning . . . and it is stated that there are many more who do not appear in the record.” She performed her last rescue at the ripe age of 64.

During her career, Lewis received countless awards and honors. Her likeness graced the cover of Harper’s Weekly Magazine and she was the only woman to receive the prestigious Grand Cross Medal of the American Cross of Honor Society. The Society gave Lewis the title of “The Bravest Woman in America.” In addition to her other honors, she received visits from U.S. presidents and Newport held a parade in her honor. The Life-Saving Benevolent Association awarded her a silver medal and a $100 check and, late in life, the Carnegie Hero Fund provided her a lifetime pension of $30 per month.

Lewis died of a stroke at the age of 69. Her funeral was attended by nearly 1,500 mourners and she was laid to rest at the Common Burying Ground in Newport. She served as Lime Rock Lighthouse’s keeper for over 50 years and saved the lives of dozens of men and women. In addition to her many awards and accolades, the Rhode Island Legislature renamed Lime Rock for her, and the Lighthouse service renamed Lime Rock Lighthouse in her honor. Later, she was honored as the namesake of the Coast Guard 175-foot Keeper-Class buoy tender homeported in Newport.

Lewis’s career serves as an example of the modern Coast Guard’s core values of honor, respect and devotion to duty. She stood the watch through fair weather and foul, saving numerous lives in the process. Unfortunately, the story of Lewis and dozens of other women who kept the light remains largely unknown to the American public. Lewis dedicated her life to the safety of others, serving as a role model for both men and women of the long blue line.