How Ports Are Being Reinvented for the Green Transition

When it comes to launching the energy transition, maritime policy is one of the key battlegrounds. But many ports, aware of their ecological and economic vulnerability, have committed to sustainable development strategies.

According to the latest research, sea levels will rise considerably (from 1.1 to 2 metres, on average) by 2100, putting about 14 per cent of the world’s major maritime ports at risk of coastal flooding and erosion. Ports in France, including 66 that are used for maritime trade, are also under threat, and will have to adapt their infrastructure.

Enter the “ports of the future.” Ports govern globalized economic activity and are true “energy hubs,” bringing together all kinds of transport (maritime, land-based, waterway and aeronautic). Now, they’re aiming to cut back on real estate, be more respectful of the environment and better integrated into cities, particularly through the concept of “urban ports.”

At least US$1 trillion will have to be invested between 2030 and 2050 to reduce shipping’s carbon footprint by 50 per cent by 2050. As of last year, oil-derived fuels accounted for 95 per cent energy consumption in transportation. Meanwhile, maritime traffic is predicted to increase by 35 to 40 per cent over the same period.

This dependence on hydrocarbons also represents an economic vulnerability for the maritime shipping sector due to new environmental standards.

In France, liquid bulk transport has been in decline since 2009 (decreasing three per cent on average since 2016), despite a slight uptick in 2017 (2.1 per cent). Fuel shipping (50 per cent of shipping by weight in major maritime ports) has also decreased by 25 per cent since 2008.

The golden age of oil cannot will not hold for much longer, given its environmental impact and increasing scarcity. As the consumption of hydrocarbons and coal drops, we should also see a steady decrease in fuel shipping.

The French government’s National Low-Carbon Strategy (“Stratégie nationale bas carbone,” or SNBC) aims to reduce emissions from the industrial sector by 35 per cent by 2030 and 81 per cent by 2050. This will mean a nearly complete decarbonization of maritime transport, creating a real technological challenge for the sector.

To meet these targets, ports are working to become carbon-neutral by redesigning their logistical operations (flow management) and means of production (value creation), as part of an industrial reconversion approach. They’re banking on new environmental technologies to generate a double dividend, both environmental and economic.

Building the ships of tomorrow

A 2021 study by the Getting to Zero coalition found that zero-carbon fuels had to represent at least five per cent of the fuel mix by 2030 for international shipping to comply with the Paris Agreement. Around 100,000 commercial vessels will be affected by this energy transition, according to GTT, a company specializing in the transportation and storage of liquefied natural gas (LNG).

In this vein, an ambitious environmental certification program, Green Marine Europe, launched in 2020 in order to create the European maritime industry of tomorrow.

New fuels with smaller carbon footprints, such as liquefied natural gas, ammonia and ethanol, and the accelerated adoption of alternative propulsion systems will be needed for the sector to become greener. 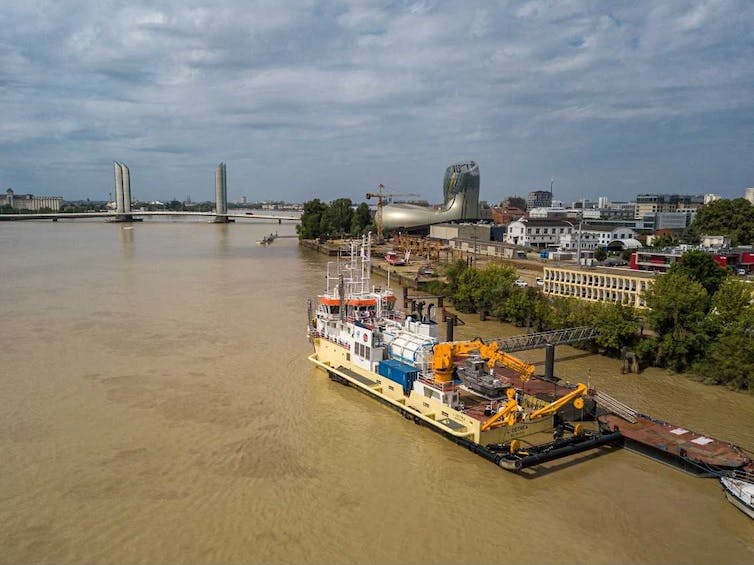 In 2020, Bordeaux’s port was fitted out with an LNG-powered dredger, which requires less energy and is more environmentally friendly, thanks to its water injection-dredging mechanism. (Delphine Trentacosta), Author provided

Hydrogen fuel (initially “grey,” now increasingly “green”) represents another viable alternative in the medium-term for fleets subjected to heavy rotation. Although the project is currently in its early stages (involving small vessels of 60-80 seats), more ambitious initiatives have been launched, such as the Hydrotug boat in construction for the port of Antwerp.

The arrival of steam-powered engines put an end to the use of large wind-propelled clippers in the late 1800s. But technologies that harness the wind could make a major comeback, with ships using sails and kites to reduce fuel use.

Developing electric facilities and technology is also essential to the energy transition, whether through electrified wharfs, turning port seawalls into energy producers, or developing electric ferries that use solar power, bioenergy or marine power.

As the energy transition progresses, we will see ports go from consuming large quantities of a single energy source to using multiple energy sources and becoming electricity producers.

On that note, offshore wind turbines will profoundly change French coasts over the coming years. The first sites will be near ports (with the first French offshore 80-turbine wind farm due to launch in Saint-Nazaire in 2022). In the medium term, the objective is to reach a capacity of 5.2 to 6.5 Gigawatts of offshore wind energy in France by 2028.

The forthcoming offshore wind farm near Quai Hermann du Pasquier in the city of Le Havre, which will launch in 2022, is being presented as the “biggest industrial renewable energy project in France,” and symbolizes the port’s industrial and energetic transition. What’s more, after 53 years of service, the thermal power station in this area, which used 220 tonnes of coal daily, closed down on 31 March 2021.

Finally, it should be noted that offshore wind farms represent an opportunity for ports to produce their own hydrogen by electrolysing seawater.

Bringing city and port closer together

The energy transition forces governments to reconsider the connections between city and port. Development projects based on an entirely oil-based economy and the globalized boom in shipping container transport in the second half of the 20th century disconnected city and port at every level. Ports were removed from urban settings due to a lack of space, with huge industrial port zones created on the city’s outskirts.

Now this separation is being questioned, marking the return of the port as a space that’s open to the rest of the city.

For port cities, where ships coexist with residents, industry, businesses and tourism, pollution has motivated citizens into action. Local environmentalism has pushed ports to become open to cities, by promoting the development of circular economies and industrial ecology.

Many ports have launched energy transition projects, aiming to transform city-port relations. The port area is turning out to be an excellent setting to try out new practices founded on greater co-operation between local players.

In La Rochelle, for example, environmental and energy-based issues provided an opportunity to start a shared, collaborative discussion about the future of the metropolitan area. The La Rochelle Zero Carbon Territory project, where the greater urban area aims to become carbon neutral by 2040, the energy transition is being undertaken through concerted planning between the city and its port. The port has committed to initiatives that limit its environmental and energy-related impact, while providing benefits to the local economy.

The roof of the submarine base in the La Rochelle port was fitted out with 7,580 solar panels in 2018. (Olivier Benoît), Author provided

In Le Havre, as in Bordeaux and elsewhere, this city-port interconnection is being strengthened by combining energy-related challenges and digital opportunities.

In time, this should lead to the birth of “smart port cities” (connecting “smart cities” with the “ports of the future”), for a “new model for urban and industrial port areas, blended together by innovation.”

Although the environmental challenge is clearly huge and complicated, this energy transition gives us the opportunity to reinterpret ports as laboratories, and to test new practices and technologies. Case in point: the Port of Rotterdam decreased its CO2 emissions by 27 per cent between 2016 and 2020.

Ports have always been showcases of industrial revolution, with the arrival of steam, propellers and then metal hulls. They often feature the most recent energy-related technology, as shown by the painting of the port of Le Havre, by Camille Pissarro.

Now it’s up to them to keep this legacy alive, as true gateways to a more durable and resilient economy.

Sylvain Roche is an associate researcher focused on energy and territorial transition at Sciences Po Bordeaux.

Translated from French by Rosie Marsland for Fast ForWord.