In a recent port call in Busan, sailors and Royal Marines from Britain’s flagship paid tribute to their countrymen who saved South Korea from Communist rule nearly 70 years ago. Almost the entire ship’s company of HMS Albion paid their respects to the 900 Britons who made the ultimate sacrifice and rest at peace in the free soil of South Korea.

Around 2,300 servicemen from 11 countries are commemorated at the United Nations Memorial Cemetery in Busan – the only UN cemetery in the world – at the southeastern tip of the republic. It was at the city’s gates in the late summer of 1950 that the Communist invasion from the north was halted – North Korean forces were stopped just 30 miles from Pusan at it was known at the time.

For HMS Albion’s Assistant Logistics Officer Sub Lieutenant Matthew Ford, the commemoration was particularly poignant. “My grandfather served as a chief petty officer shipwright on the carrier HMS Theseus during the Korean War,” he said. “When I joined the Royal Navy 18 months ago, I never imagined I’d be here in the Far East so early in my career, so it’s very special to be following in his footsteps, and to pay my respects to those who didn’t come home.”

The Royal Navy served extensively throughout the 1950-53 conflict, with at least one aircraft carrier on station providing air support – including the famous downing of a MiG jet by a piston-engined Sea Fury fighter – while on the ground 41 Commando spearheaded the Royal Marines’ commitment as a raiding party, and later fought with distinction at the Choison Reservoir.

The Korean War was the last major conflict in which the Commonwealth fought together as a combined force. Sub Lieutenant Pauline Theron from the Royal New Zealand Navy is currently serving on HMS Albion as part of an exchange programme. “The Commonwealth made a significant contribution to the Korean War,” she said. “I live in New Zealand and I’m South African by birth, so I was very pleased to pay tribute to my own countrymen who rest here." 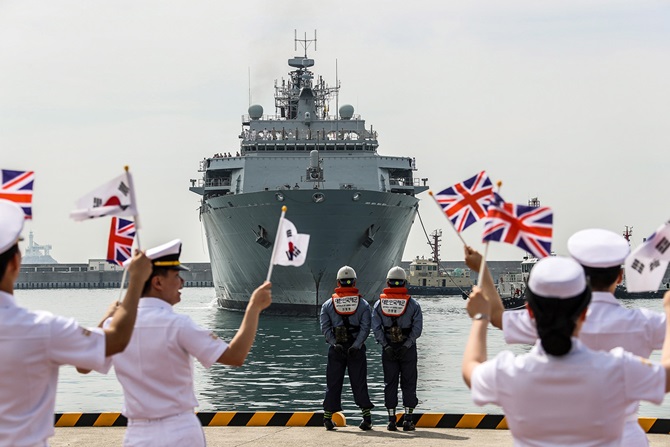 “It was a huge privilege for the Fleet Flagship to commemorate the service and sacrifice of all those who fought under the banner of the United Nations,” said Captain Tim Neild RN, Albion’s Commanding Officer. “It seems right and proper that HMS Albion is here all these years later to help preserve and strengthen the freedoms for which they fought and died.”

It is ten years since a British warship visited Busan, and while the Royal Navy and the Republic of Korea Navy have worked together on counter-piracy operations in the Middle East, opportunities to come together in Asia-Pacific have been relatively scarce.

HMS Albion left the UK in February, and has now reached the mid-point of her deployment. “In the midst of our maritime security duties and busy defence engagement programme, my sailors and marines are getting to visit some extraordinary places and are forging life-long memories. We joined the Royal Navy to see the world and HMS Albion is truly living the advert,” said Capt. Neild.