Should China protect its coastal communities with an international emission control program?

Emissions from ships caused the early deaths of more than 20,000 Chinese people in 2015. China has been taking steps to curb this blight, notably by expanding its domestic emission control areas (DECAs) to cover the country’s entire coastline.

While an important step, this new “national” DECA has room for improvement. The four emission control areas currently managed by the IMO offer good points of reference.

The IMO is the United Nations body responsible for regulating international shipping. Its ECAs have strict limits on the emission of sulfur oxides and nitrogen oxides, and thus reduce the damage of shipping on sensitive human populations and ecosystems. 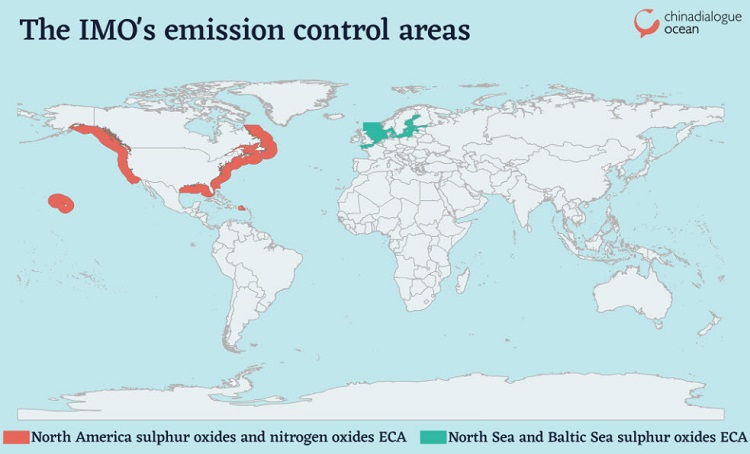 Mexico and some Mediterranean countries are working to add to the IMO’s family of ECAs. Led by the U.S. Environmental Protection Agency, the Commission for Environmental Cooperation has completed a feasibility analysis for a 200 nautical mile Mexican ECA. And a similar study has been announced by the European Commission and France on a potential Mediterranean ECA.

China’s three regional DECAs were established three years ago, covering the Yangtze River Delta, the Bohai Rim and the Pearl River Delta. With its new national DECA, many industry stakeholders are wondering when the country will join the IMO’s international network. 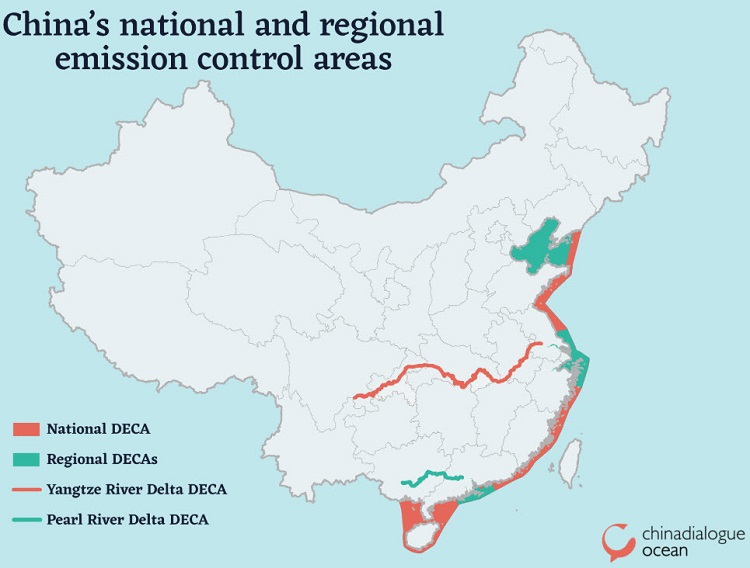 A new report released by researchers from George Washington University, the University of Colorado Boulder and the International Council on Clean Transportation conservatively estimates that shipping was responsible for approximately 60,000 premature deaths globally in 2015, more than one-third of which were in China. It is noticeable in this report that none of the five countries most impacted by emissions are completely protected by an IMO ECA. Only the U.K., which ranks fourth in terms of both overall premature mortality and per capita early deaths, is partially protected on its east coast by the North Sea ECA.

Top 20 countries by early deaths from shipping emissions in 2015 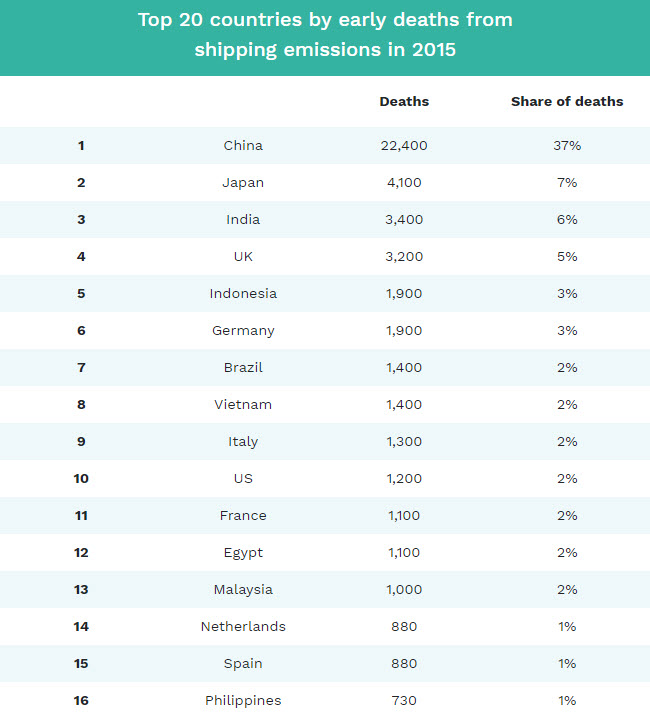 China declared war against air pollution in 2013 when it released its Air Pollution Action Plan. This was renewed in 2018 with a Three Year Action Plan. The overall goal is to reduce emissions of sulfur oxides (SOx) and nitrogen oxides (NOx) by over 15 percent and the ambient concentration of particulate matter (PM) 2.5 by over 18 percent for cities failing to meet emissions standards, compared to 2015 levels. In 2017, although all met the above goals, only three of the nine coastal provincial-level administrative regions reached the national PM2.5 standard of 35 micrograms per cubic meter. These coastal provinces could be further protected by an ECA system.

China has been progressively controlling ship emissions within its territorial waters. On the fuel quality side, the regional DECAs started capping marine fuel sulfur content at 0.5 percent in 2016. With the new national DECA, this requirement now covers the entire coast of China.

For marine engines, new emission standards entered into force in July 2018. They apply to smaller marine engines (with a per cylinder displacement of less than 30 liters) and are set to become more stringent over time. The national DECA has also added a retrospective requirement. Engines installed on domestic ships after 2015 must now comply with the Tier II standard set by the IMO for NOx.

In addition, starting in July 2019 Chinese ships with the capacity to use shore power will be required to do so when berthed at ports with the appropriate infrastructure. Ships without this capacity will need to install it and start using it from 2022.

These policies will reduce SOx and NOx emissions from business-as-usual trajectories, but they seem far from enough to maximize the benefits of ship emissions control. Some researchers at Tsinghua University think that China’s national DECA should be extended out to at least 100 nautical miles to account for the broader influences of ships in key port cluster regions like the Yangtze River Delta.

The wider the ECA, the greater the environmental benefits. However, ECAs become less cost-effective when extended further out into the sea away from the most impacted communities. And there are additional real-world issues to worry about. If an ECA is too narrow, ships could practically divert their route to limit the distance they have to travel within it, thus reducing the ECA’s efficacy. There is clear evidence of ships doing exactly this. In the case of China, an ECA of at least 100 nautical miles is needed to effectively discourage such behavior. Of course, territorial disputes can impact on the extent of an ECA, and this is certainly so in China’s case. But we believe that in non-disputed regions it’s still feasible to delineate an ECA that maximizes environmental benefits.

When should China join the IMO ECA family?

If an IMO ECA is the successor of China’s national DECA, when will the right time be to make the switch? Given the negotiations and administrative processes involved, we estimate that the minimum time required for an IMO ECA to take effect is three years after applying for it.

In recent years, China’s domestic environmental standards have closely followed those set by the E.U. and the U.S.. On average, China enforces policies equivalent to its western counterparts eight to nine years after them.

In the marine sector, the world’s most stringent emissions standards are in the U.S. In 2015, the country capped fuel sulfur at 1,000 parts per million. In 2016, it introduced the IMO Tier III requirement for NOx.

Given the eight or nine year lag time, it seems reasonable to assume that China will follow suit by 2023 and 2024. And given that it takes about three years to enact an ECA with the IMO, it could submit its application as early as 2020.

The good news is that China has already quietly announced its intention to carry out a feasibility study for a future IMO ECA in its recently-released Action Plan for Diesel Truck Pollution Control. Since this plan expires in 2020, we are hopeful that further efforts to control ship emissions in China will be announced in the next year or so.

Dan Rutherford directs the marine and aviation programs at the International Council on Clean Transportation (ICCT).