The new super-size container ships are too big to sail into the Ports of Boston and Portland where there is also insufficient market demand to warrant using the big ships. There is economic merit in sailing a single large ship across the North Atlantic while carrying containers destined for multiple ports that include Newark, New York City, Boston and Portland, with container transshipment occurring at Halifax. However, transshipment at Halifax opens the door to include containers for other destinations including orts located along the Upper St. Lawrence River (Seaway) and around Lakes Ontario and Erie.

While container ships in excess of 12,000 TEU sail across the North Atlantic, Halifax south terminal is being upgraded to provide service to larger container ships. Using container transfer technology increases the volume of container transshipment to multiple interlining ships. However, a comparatively diminutive container ship of less than 1,000 TEU capacity has feasibly sailed across the North Atlantic and Lower Great Lakes between the Ports of Antwerp and Cleveland. The high cost of container railway transportation between Newark and Cleveland offsets the savings from sailing a large ship to Newark, making the small ship cost-competitive.

That ship provides the basis to develop a business plan involving a comparable size of ship to sail a seasonal interline service between Halifax and inland waterway ports located upstream of the Port of Montreal. Doornekamp Lines has developed such a business plan.

Doornekamp Lines has negotiated a partnership agreement with the French ocean carrier CMA CGM, which sails into Halifax and Newark. They plan to carry interlined containers and other freight between Halifax and ports located along the St. Lawrence Seaway and Lower Great Lakes. However, Canadian “cabotage” regulations will determine the competitiveness of the proposed interlined ship service against railway transportation. One interpretation of Canadian regulations could actually allow Doornekamp Lines to fly a European flag from Halifax while sailing to Canadian Seaway ports, thereby saving the higher expense of flying the Canadian flag.

Transportation regulation could restrict the interlining ship sailing from Halifax to serve only the American ports of Ogdensburg, New York and Cleveland, Ohio. Canadian bound containers destined for retail related distribution warehouses located across Eastern Ontario would be offloaded at Ogdensburg and carried by truck to their final destinations, despite the Port of Johnstown, Ontario being located directly across the river from Ogdensburg. A tug barge would carry containers from Ogdensburg across the international border to any of the ports of Toronto, Oshawa or Hamilton, with final destinations for containers spread across the greater metropolitan Toronto region. 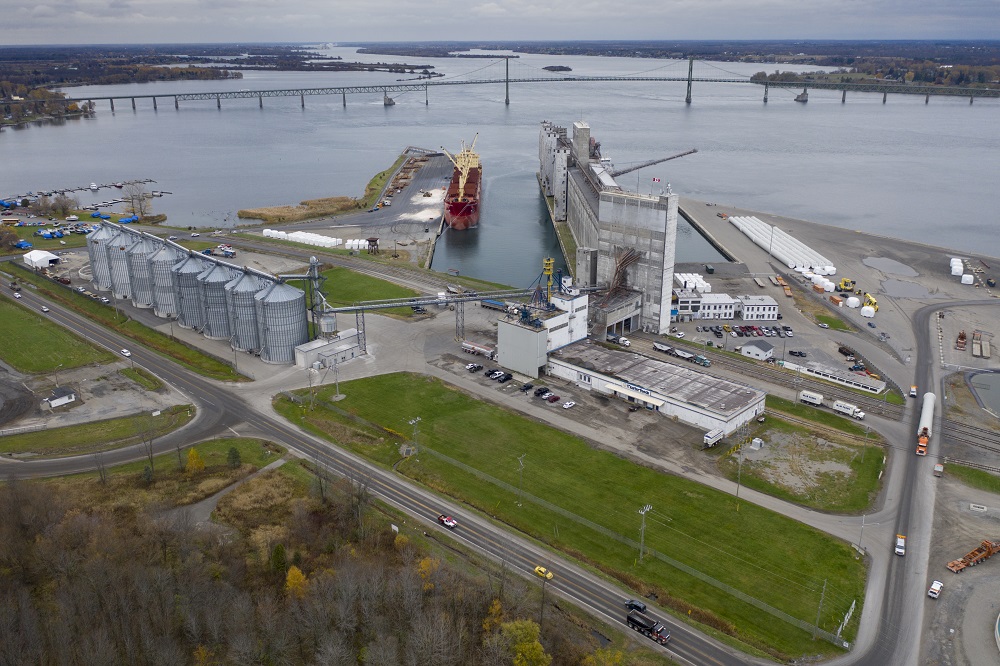 An interpretation of Canadian transportation regulation will determine whether an interline ship sailing from Halifax would serve only American inland waterway ports or whether the ship will also serve Canadian Seaway and Lower Great Lakes ports.

Prior to the reconstruction of the Panama Canal to transit larger container ships, an American transportation research group compared the cost of moving a full ship load of containers from the Port of Long Beach CA and the inland waterway Port of Memphis. Despite an older generation Panamax ship having to sail 3-times the distance via the Panama Canal compared to the more direct railway journey, the ship interlined with a tug-barge flotilla incurred savings in per container transportation costs over a fleet of railway trains traveling over a much shorter and more direct route.

A container ship of under 1,000 TEU feasibly sailing between the Ports of Antwerp and Cleveland (metro population two million) suggests potentially feasible interlined sailing to a metropolitan population of six million located in and around Toronto. Over-zealous regulation and not market forces would likely prevent Doornekamp Lines from extending their proposed interlined ship transportation service from Halifax to Toronto. The Toronto region offers a substantial market for lower priority containers shipped on extended delivery schedules at lower per container transportation rates. Several large distribution warehouses are located east of Toronto near Seaway ports.

The successful precedent of a diminutive container ship feasibly sailing between the Ports of Antwerp, Belgium and Cleveland provides a basis to develop an interlining ship transportation service to sail between the container transshipment Port of Halifax and the Lower Great Lakes. The ship will interline with ocean going super-size ships operated by the CMA CGM Group on the trans-North Atlantic service to the Port of Newark, from ports of origin located around Europe and extending into Asia. There is potential for a seasonal interlining service to be feasible, with regulation determining which inland ports it will serve.