America Remembers the Victims and First Responders of 9/11

On Wednesday, Americans and their allies around the world paused to remember the terrorist attacks of September 11, 2001, which killed nearly 3,000 people in New York, Pennsylvania and Washington, D.C.

In the morning, the 9/11 Memorial in lower Manhattan hosted a ceremony to honor the victims of the attack, including the annual reading of the names of all 2,983 people who lost their lives. In the evening, it will open to the public and will light up the night with the "Tribute in Light," an installation of twin searchlight beams representing the twin towers.

President Donald Trump attended a ceremony at the Pentagon, which was also struck in the attacks. Vice President Mike Pence was in attendance at a memorial ceremony at the third attack site outside Shanksville, Pennsylvania, where a hijacked aircraft went down before reaching its target.

Dozens of parallel ceremonies were held across the nation, abroad and at sea. In Boston, the staff of U.S. Coast Guard First District and Sector Boston held a remembrance ceremony on the waterfront. Aboard the Royal Navy auxiliary RFA Mounts Bay, which has just wrapped up a disaster relief mission in the Bahamas, a member of an embarked U.S. Coast Guard law enforcement detachment gave the midday pipe, and the crew held a moment of silence. On the remote island of Diego Garcia, the U.S. naval base in the Indian Ocean, American and British personnel held a ceremony of remembrance and recounted their personal memories of 9/11. 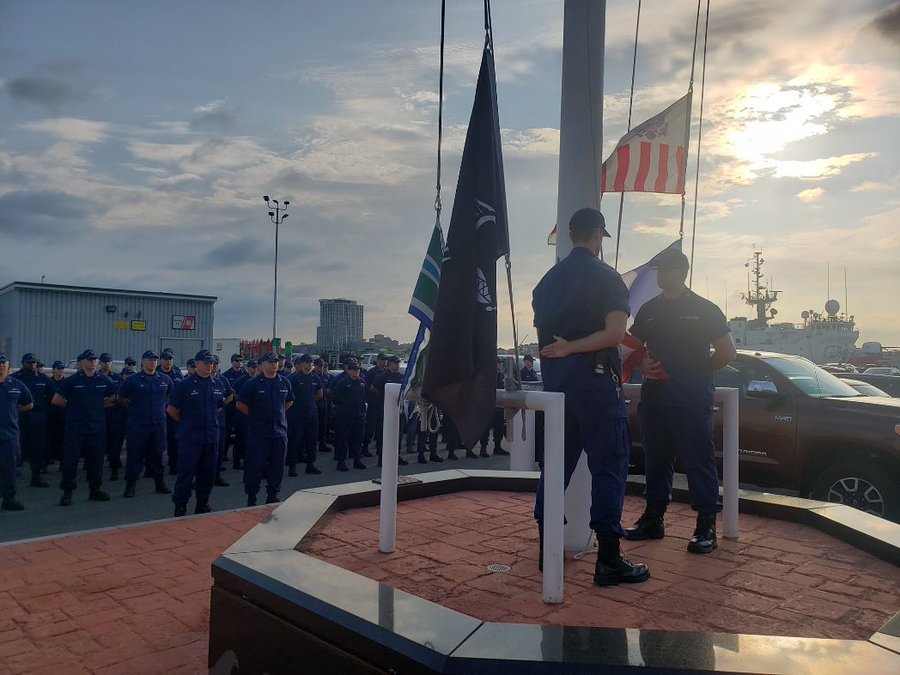 The attacks' legacy continues today: thousands of first responders and survivors still suffer lingering health effects from exposure to toxic dust and fumes at the World Trade Center site, and many others have died from health conditions linked to the event. In July, President Trump authorized a permanent extension of the $5.5 billion September 11th Victim Compensation Fund, which provides support for those who lost family members in the attacks and pension benefits for those whose health was affected. The extension was a high priority for victims' advocacy organizations; over 50,000 people have filed claims for support from the fund, and its operation will now continue without interruption.

Earlier this year, the 9/11 Memorial and Museum opened a new section at the World Trade Center site to commemorate this ongoing sacrifice. This "memorial glade" is lined by six monoliths incorporating steel from the original World Trade Center buildings, and it is dedicated to those who have suffered from the long-term effects of the attack.

In New York, the first responders to the attacks included mariners and coastguardsmen who worked to evacuate survivors from the World Trade Center site. The U.S. Coast Guard organized a boatlift effort that rescued thousands of people from lower Manhattan: five cutters, 12 Coast Guard patrol boats and over 100 civilian vessels picked up survivors from the water's edge near Wall Street. Ground transporation was shut down by the attack, and local mariners aboard tugs, harbor cruise boats, small ferries and water taxis were a critical part of the evacuation.

#USCG Activities New York issues a warning to mariners that the Port of New York is closed. #September11 #NeverForget