The judges have decided the results of the 7th International Student Design Competition for a Safe Affordable Ferry – a RoPax for Lake Victoria on the Kenya side.

According to one of the judges - the naval architect Charles Cushing, “This competition was extremely challenging, and all the designs were among the best we have seen.”

The awardees will be invited to present their designs at the Worldwide Ferry Safety Association’s (WFSA) Ferry Safety and Technology conference, to be held in New York, April 22-24. As in previous years, a grant from the TK Foundation will be applied for to cover the travel and registration expenses of the team captains.

Cushing said: “The Bremen team was distinguished by performing an excellent transport study; in response to the weed proliferation and lack of repair facilities in the Lake - created redundancies with three propellers; the propellers were Schottel type greatly simplifying repair. Furthermore the team had the best design for accommodating rail cars.”

The Terms of Reference/Design Specifications are the basis for the student entries. Lake Victoria has been subject to increasingly perilous storms over the past decade, and the hazardous weather has been a factor in the deaths of over 3,000 fishermen annually. Although the competition specifications were for a RoPax to traverse the Winam Gulf region of the Lake, in Kenya the vessel also had to be able to traverse the entire lake including the Tanzania and Uganda sides.

The specifications that the student designers had to adhere to included provisions for shallow landing, the overgrowth of water hyacinths, and the menacing storms. The vessel is required to safely transport 200 passengers, but also must maintain lanes for wheeled vehicles in a space equivalent to about 700 lane meters. The routing calls for several stops in Winam Gulf from Kisumu and Mbita Point and make stops at Kendu Bay and Luanda K’Otieno.

The design comes at a good time for Kenya, which is noted to an economic powerhouse, structured for sustained growth, by the International Finance Corporation, (IFC) a branch of the World Bank. Kenya recently hosted the first Sustainable Blue Economy Conference in Africa and made and accomplished national level commitments to support aspects of the goals of the sustainable blue economy including revival of water transport within the Lake Victoria. Malcolm Ormiston, the CEO of a widely acclaimed Lake Winam passenger ferry, Waterbus, will make a presentation at the conference. Among other positive actions he will be installing Lake Victoria’s first AIS antenna, at Kisumu.

The following pages provide a supplement regarding the winning teams.

Supplement to WFSA Press Release- Details about the winners- Ferry Design Competition The first prize winner was the team from Hochschule Bremen, City University of Applied Sciences which designed a very sleek looking vessel, MV Usalama (Swahili for safety). The judges appreciated the safety features, that the fire and life-saving designs are made according to the SOLAS 1974 convention as well as the Lake Victoria Maritime Safety Regulations 2010. There were also inventive features – the raising and lowering the wheelhouse in order to pass under the Mbita-Rosinga Bridge so that the vessel can access the trade opportunities of all of Lake Victoria as well as the tourism islands of Mfangano and Takawiri.

Another positive feature included the use the local Kenyan shipyards that are certified by RINA and ISO 9001-2008; launching, and subsequent drydocking, at these shipyards would be by inflatable balloons. The vessel has a double hull for damage stability, with anti-fouling coating on the hull, for reduced resistance. The azimuth-drive vessel is designed and environmental impact in mind, with its emissions calculated to be lower than permitted as per the IMO EEDI Phase 2 standards. The mix of amenities for passengers, air-conditioning, food kiosk, mobility impaired access were all very much appreciated This bow loading vessel can carry 200 passengers, as well as a significant combination of vehicles/railcars. 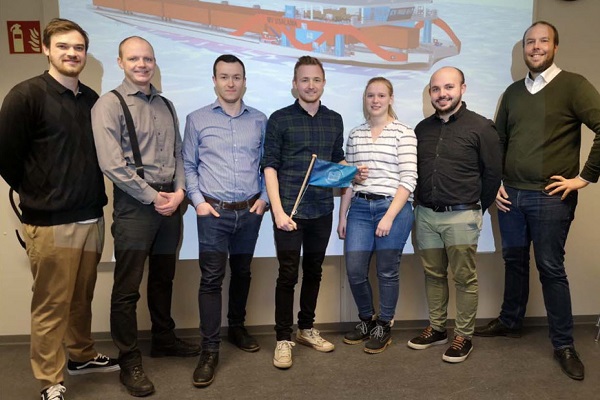 The second prize winner was the team from Rostock. This team was led by André Antonio Andrade Paiva. The team named the vessel Lukwata (Lake Victoria’s mythological sea serpent). After comprehensive safety features, this team focused heavily on affordability with a very simple steel monohull design with two propellers. The team also focused on passenger enjoyment – buffet dining, bar, seating near windows, and duty free shop. An interesting innovation is a hoistable extra deck, if needed, for cars and small vehicles.

There were three third prize winners, one from University of Rostock Masters Program, and two teams from Singapore Institute of Technology – Newcastle University.

The University of Singapore Institute of Technology – Newcastle University team led by Muhammad Rasyid Bin Mohd Hussain designed the vessel Haraka (Swahili for Fast) as a steel catamaran with a round bilge hull for low wake and stability. The vessel has water jet propulsion. Flexible solar panels provide a source of power during berthing and during non- operation hours. There is a water hyacinth catching device – although the structure of the water jets should not be impacted by the presence of the vegetation. Passenger comfort features are TV, food kiosk, cushioned seating, and tinted glass windows which filter out UV; there is also air conditioning and Wifi as well as handicapped access.

The team from the EMSHIP Masters Program from the University of Rostock, led by Pierre Courtel, called their vessel Giraffe. The ferry features good safety and affordability. The vessel is a catamaran which uses diesel fuel. Some of their attention to detail was about how the livestock would be loaded on the vessel (Kenya is strong in agribusiness). They also paid attention to Seakeeping passenger comfort in terms respecting such factors as Motion Sickness Incidence and Response Amplitude Operator.

Singapore Institute of Technology Newcastle University team captained by Andrew Ling Kwan Yuen designed Kisasa (Future in Swahili). The vessel is a steel catamaran with twin waterjets. Diesel fuel but electric power also generated with solar panels. It has a bow entry designed to prevent overcrowding. There are evacuation slides which require fewer staff to administer. The vessel has windows that open but still provide protection from rain; open deck space for passengers to walk around. There is hybrid propulsion but with space holders for future changes in fuel source whether LNG or other.