Will Second Generation Cospas-Sarsat Beacons be Introduced in 2021?

The Second Generation Beacon (SGB) is a product that has been expected for the last few years in the maritime industry. Operational requirements, specifications, and type approval standards for Cospas-Sarsat second-generation 406 MHz beacons have been developed and adopted. The space and ground segments of the system that allows the SGBs to operate are close to achieving Full Operational Capability (FOC).

As a manufacturer of testers for EPIRBs (Emergency Position Indicating Radio Beacons), ELTs (Emergency Locator Transmitters) and PLBs (Personal Locator Beacons), Aeromarine SRT is working to develop a device for conducting a complete radio survey of SGBs. The prototype of the tester is at the last stage of design.

While the industry waits for the availability of SGB, let's find out what features this new generation beacon should have and what caused the need for its development.

Distress Beacons as part of the Cospas-Sarsat System

The first life was saved using the Cospas-Sarsat in September 1982. Since then, more than 50,000 people have been rescued with the assistance of this technology.

The Cospas-Sarsat system consists of a space segment and a ground infrastructure, which include:

-    Distress beacons transmitting 406 MHz signals;
-    Search and Rescue instruments placed on board the satellite - they process and/or relay the emergency beacon signal to the nearest available ground station;
-    LUTs (local user terminals) - ground receiving stations that process the signals to extract the beacon identification data and produce an independent determination of the beacon location;
-    MCCs (mission control centers) that obtain the output data from the receiving stations and send a message about an emergency and its location to the appropriate search and rescue authority;
-    RCCs (rescue coordination centers) - authorities responsible for carrying out the necessary search and rescue operations.

Until recently, the Cospas-Sarsat system has been integrated with two types of satellites: 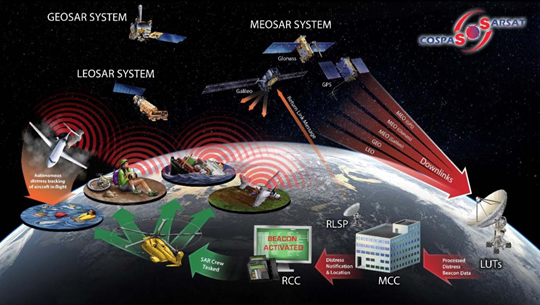 The Cospas-Sarsat system is in a state of large scale modernization - SAR instruments are been installed on board of GNSS (Global Navigation Satellite System) satellites orbiting the Earth at an altitude of 19 to 23 thousand km: GPS (United States), Galileo (European Union), and GLONASS (Russia). These new Cospas-Sarsat space elements form a system called MEOSAR (Medium-altitude Earth Orbit Search-And-Rescue).

LEOSAR, GEOSAR, MEOSAR - which system is the future of Cospas-Sarsat?

The key performance parameters that the Cospas-Sarsat system must meet are the following:

Not all the space segments that are part of Cospas-Sarsat fully comply with these criteria.

The GEOSAR system provides complete coverage for detecting 406 MHz beacons in all parts of the Earth between 75° South latitude and 75° North latitude, excluding the pole zone. These gaps around the poles cannot be eliminated due to the nature of the geostationary orbits. Other space systems (LEOSAR and MEOSAR) do not have a similar restriction.

As for the alert timing criteria, it is as follows: the distress alert must be transmitted to the responsible RCC within 15 minutes after receiving the initial signal from the beacon. The GEOSAR and MEOSAR systems meet this requirement. A peculiar feature of the LEOSAR system is that it may take a time interval of about 100 minutes to compute an independent solution and pass it to the MCC for distribution.

The accuracy of determining the beacon location is another important parameter that must be provided by the Cospas-Sarsat system.

A high degree of location accuracy is provided by the GNSS technology, which generates location data. If a beacon contains an internal GNSS receiver, the encoded location data can be accurate within 100 meters of the true position of the beacon.

Solutions calculated by the Doppler method on LEOSAR LUTs allow the determination of an independent location of the beacon and usually have an accuracy of up to 5 kilometers from the true beacon location. 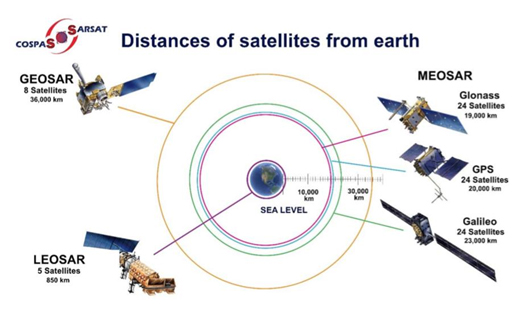 The nature of GEO satellites does not allow them to be used for independent locations, but they can instantly repeat a message with an encoded location that was calculated by a GNSS receiver (or similar device) inside the beacon.

The DOA (difference of arrival) solutions generated by the MEOSAR LUTs for second-generation beacons are expected to have accuracy for a single burst within 5 kilometers of the true location of the beacons. After several successive bursts, this accuracy is greatly improved. It is estimated that a fully operational MEOSAR system processing data from SGBs will achieve 100-meter accuracy within 10 minutes after the first burst.

Thus, the MEOSAR system includes all the advantages of both the LEOSAR and GEOSAR systems. At the same time, it overcomes their current multiple limitations. When a high level of satellite redundancy and availability is achieved (there will be 72 of them), this system will significantly improve the speed and accuracy of locating emergency beacons. More lives will be saved.

In the coming years, all satellite systems - LEOSAR, GEOSAR, and MEOSAR - will operate in tandem, serving both first- and second-generation beacons; their compatibility parameters have been agreed upon.