SCF Group and MSUN to Create a "Floating Laboratory"

SCF Group (Sovcomflot) and the Admiral Nevelskoy Maritime State University (MSUN, Vladivostok) signed an agreement to establish a joint educational and research project entitled the “Floating Laboratory”. It will be based aboard Gennadiy Nevelskoy, an ice-breaking platform supply vessel (IBSV) owned by SCF Group. The agreement is the latest chapter in a long-term cooperation program between SCF Group and the University.

On the educational side, Gennadiy Nevelskoy will host practical training for MSUN cadets, internships for MSUN faculty members, and research and educational programs for post graduate students and young scientists. On the research side, the Floating Laboratory will focus on researching electric propulsion and the specifics of vessel equipment performance during ice navigation. Another goal of the project is to develop innovative solutions for the effective and safe vessel operation in the freezing seas of the Russian Far East and the Arctic. Acting as a Floating Laboratory will in no way hinder the vessel’s ability to serve its principal purpose as an IBSV for Sakhalin-2 project.

The agreement signing ceremony was held aboard the vessel as part of a special event to mark the arrival of Gennadiy Nevelskoy to the Russian Far East, the area of her regular operations, and her first call at the port of Vladivostok. The celebrations were attended by Evgeniy Ambrosov, Senior Executive Vice President and COO of SCF Group, Sergey Ogai, Rector of MSUN, as well as representatives of regional and municipal authorities and the Russian Geographical Society. Alexander Kukel-Kraevsky, great-great-grandson of the pioneering Russian navigator Admiral Nevelskoy, attended the ceremony as a guest of honor.

Evgeniy Ambrosov said: “MSUN is a long-standing, traditional partner of SCF Group. We are proud of the strong friendly ties with this meritorious educational institution. Many top managers and captains of SCF have received a top-class education at this university and are proud to be its graduates. It is a great honor for us to be part of the university’s history, which includes legendary captains such as Mikhail Gotsky, Anna Shchetinina, Arnold Krems, Nikolay Artyukh, Vadim Abonosimov and Nikolay Inyushkin. Today we are turning another page in our collaboration. For SCF Group, people are our most important asset, and we attach prime importance to supporting the professional training system for future merchant fleet officers, many of whom will soon join our crews.” 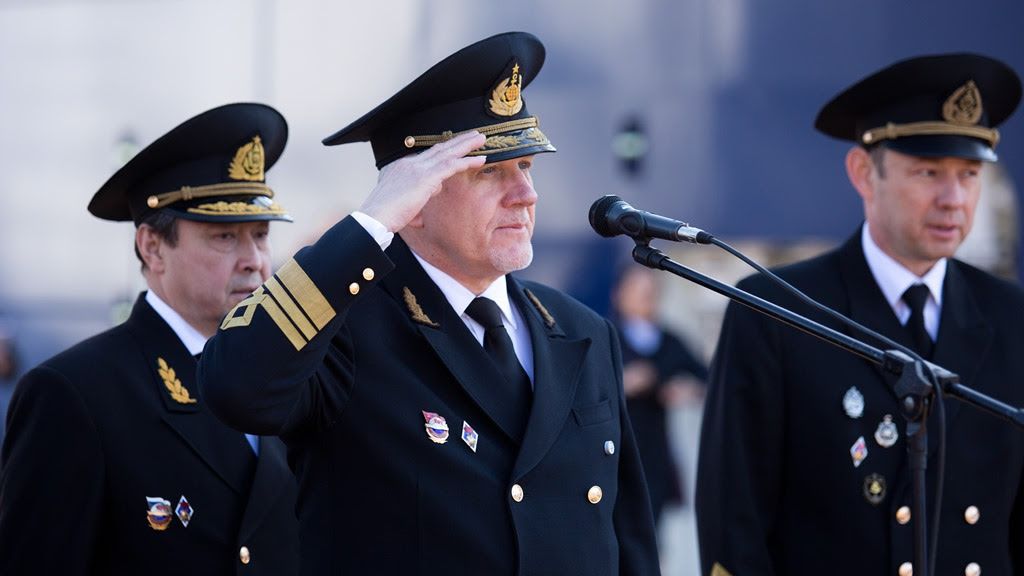 Gennadiy Nevelskoy (deadweight 3,000 tons) is a state-of-the-art IBSV commissioned by SCF Group to serve the three offshore platforms of Sakhalin Energy (Saphalin-2 project) located in the Sea of Okhotsk on the Russian Far East. The vessel was delivered in March 2017, registered under Russian flag and is operated by the all-Russian crew. She is equipped with an Azipod propulsion system with a power rating of 13 MW and has been assigned an ice class of Icebreaker ICE-15 by the Russian Maritime Register of Shipping.

She is the lead ship in the series of four vessels commissioned by SCF Group to serve Sakhalin-2 project. All the other vessels in the series are scheduled for delivery in 2017 and will be also named after renowned Russian naval commanders.

The vessel was named after Gennadiy Nevelskoy, a Russian admiral who played a crucial role in exploring the Sakhalin Island and the Russian Far East. During the Amur expedition organized by him in 1849-1855, he explored the estuary of the Amur River and proved that Sakhalin was an island separated from the mainland by a strait.