Damen Shipyards Group has delivered a Cutter Suction Dredger (CSD) 500 and a Multi Cat 1506 to Maritime Constructions of Port Adelaide, Australia. The two vessels have been put to use on a port extension project in Onslow, Western Australia.

Maritime Constructions has been awarded the contract to carry out capital dredging works for the Onslow Marine Support Base Channel Dredging project, which will see the modification and expansion of the Beadon Creek Harbour Approach Channel, Swing Basin and Berth Pocket. This involves the dredging and reclamation of up to 950,000m3 of sediment. 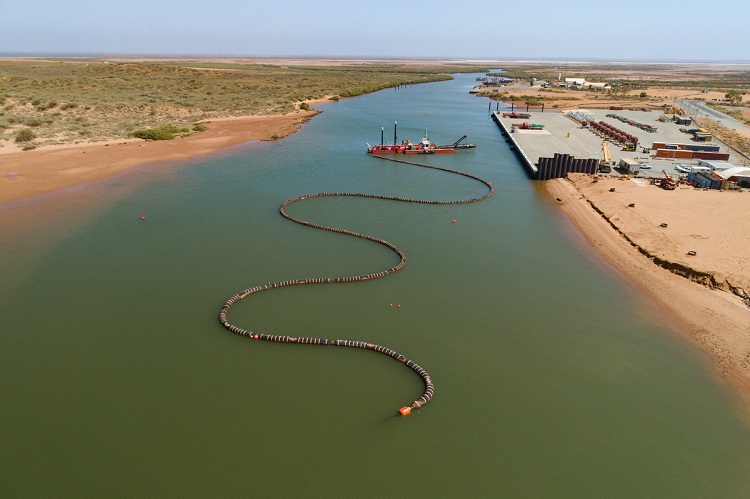 Following the award of contract, Maritime Constructions required rapid delivery of the vessels. This made Damen a natural choice for them.

Shane Fiedler, CEO Maritime Constructions, said, “After visiting and discussing our needs with several dredger and ship builders, Damen clearly stood out with distinct advantages in the construction and functionality of the CSD500. Damen proved to be extremely customer-focused with rapid response times on technical queries despite our customisation investigations. Many of the features and lessons that our organisation has built into our own plant and equipment was already employed in Damen’s designs, which was a strong indication that Damen is an industry-focused dredger builder rather than an ideological one. Along with the fact that Damen had dredgers in stock, this made the choice very straightforward. The Damen build philosophy and the final product were very appealing to our team.”

Like Damen, Maritime Constructions is a family-owned and oriented company. The shared values of the two companies also made for a good partnership, as Damen Sales Manager Vincent Maes explains.

“Our two companies have much in common. We share a ‘safety first’ approach that extends to a commitment to the environment in which we operate – a key feature of the Onslow project. And, as family companies with a long-term relationship with the sector, we also share a long-term view and ambition within the dredging industry. It is a pleasure to work with such a likeminded organisation.”

Damen shipped the vessels from Damen Shipyards Changde, China through Shanghai to Dampier. From there, Maritime Constructions arranged the road transport to Onslow. The CSD, being a modular design, was shipped in sections. The spud carrier, added to increase the dredging production on this project, was transferred from Damen stock in the Netherlands. Damen Dredging in the Netherlands also supplied extra dredge pumps, gearboxes, couplings and other parts. From these, Maritime Constructions has constructed three extra booster stations needed to pump the material over the maximum distance.

Upon arrival, a Damen Field Service Engineer supported the client with the assembly of the dredger. The CSD, named Pilbara Sawfish after a local endangered species, then started dredging. It has since dredged 700,000m3 of an abrasive mix of coarse sand, shell, cobbles and gravel and the Onslow project is shaping up nicely.