Siem Car Carriers has officially launched its latest vessels at a naming ceremony at Xiamen Shipyard in China on November 15, 2019. The Siem Confucius and Siem Aristotle are the first, trans-Atlantic Pure Car Truck Carriers (PCTCs) to operate full-time on LNG and are both powered by an identical MAN Energy Solutions’ propulsion solution. The vessels will transport cars for the VW Group between Europe and China.

Mikael Adler – Vice President, Head of Region Asia Pacific – Engines and Marine Systems, represented MAN Energy Solutions at the event and said: “I’m very happy to be here for what is the culmination of several years’ work. These vessels represent a new departure and a new ambition with their LNG-fuelled propulsion solution heralding a new era of diminishing emissions within trans-Atlantic shipping as well as within the global, car-manufacturing supply chain. This ties in perfectly with MAN Energy Solutions’ belief that it is time for a ‘Maritime Energy Transition’ to find clean, decarbonised solutions for seaborne trade and transportation.” 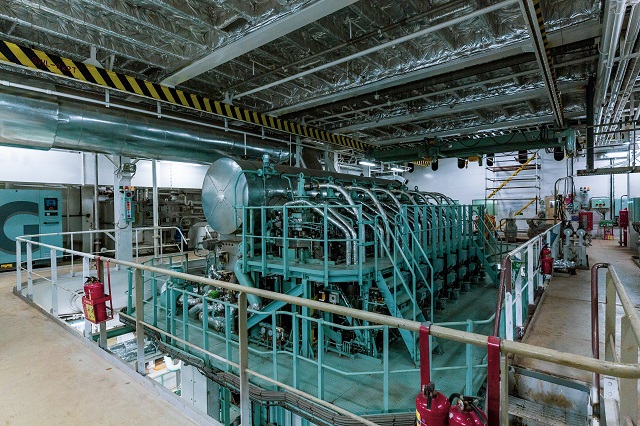 Finally, each vessel is driven by a four-bladed MAN Alpha fixed pitch propeller of the highly-efficient Kappel design. The propellers have a diameter of 6.95m and were produced by MAN’s propeller licensee, Dalian Marine Propeller Co., Ltd., in China.

MAN reports that these are the very first L28/32DF units approved for Tier III operation without SCR (Selective Catalytic Reduction), as well as being the first such units to be built by Chinese licensee, CMP. Furthermore, these are the first 28/32DF engines to be built in a 7-cylinder variant. All GenSets are turbocharged by individual MAN TCR 16 (for the 9L28/32DF units) or TCR 18 (for the 7L28/32DF units) turbochargers, with the entire set-up overseen by MAN’s proprietary SaCoS engine-control system.

Bjarne Foldager – Senior Vice President, Head of Two-Stroke Business at MAN Energy Solutions – said: “Our dual-fuel portfolio can rightly be considered as mature technology with references now in every major marine segment. With 2020 and the new IMO emissions legislation fast approaching, our dual-fuel engines continue to act as standard bearers for environmentally friendly, reliable propulsion technology with their seamless switching between fuels and elimination of methane slip. Furthermore, the ME-GI’s use of the Diesel combustion principle ensures that it can easily adapt to run on whatever fuels the industry may prefer in the future.”

Foldager continued: “With well over 400 sales already amassed by MAN Energy Solutions’ entire portfolio of dual-fuel engines – all running on clean fuels such as methanol, LPG or LNG – these car carriers mark yet another milestone in the development of the dual-fuel market segment and cement the success of the strategy MAN Energy Solutions has laid over the past decade. The machinery we have provided for these vessels also fits with our desire to increasingly become a supplier of complete propulsion solutions.”

VW stores its vehicles at German port, Emmen, for transport to China. As the shipping of cars from one continent to the other contributes its fair share of emissions, VW – as one of the first OEMs – decided to significantly improve the environmental balance of its marine transport fleet by ordering the new car carriers.

Thomas Zernechel, Head of Group Logistics, commented on the ship’s strategic importance for Volkswagen Group's vehicle logistics: "We are entering a new field here to reduce emissions. Both ships are the first overseas car freighters in the world to be LNG-powered. In addition to the increasing use of LNG trucks, conversion of our many rail transports to green electricity and the use of biofuel in the short sea segment, the two new LNG ships represent an important building block for our strategic goal of climate-neutral logistics.”

Each of the newbuildings operated by Siem Car Carriers will be capable of carrying 4,700 vehicles. Both ships will be equipped with a 2 × 1,800 m3 LNG tanks installed below deck to fuel the MAN B&W ME-GI main drivers. The vessels are replacing two of nine conventional PCTCs in Siem’s fleet. Each newbuilding is estimated to cut CO2 emissions by up to 25%, NOx by up to 30%, particulate matter by up to 60%, and SOx almost completely. With this new approach, VW is taking a step in cutting down emissions in its supply chain – from manufacturing to final delivery.

The Volkswagen Group joined the Clean Shipping Network (CSN) at the beginning of 2014 and was the first German automaker to use its index for assessing the environmental impact of its marine transport.

CSN aims to provide key players in the maritime supply chain with the information they need to make environmentally responsible decisions. Its ‘Clean Shipping Index’ is an independent and holistic labelling system of vessels' environmental performance; a practical tool for, among other uses, choosing more sustainable shipping alternatives.

The company has actively considered the use of LNG-powered roll on/roll off car carriers on other routes for some time, culminating in today’s event.

Volkswagen Group Logistics already transports half of the vehicles produced by sea, continuously working on the optimisation of its marine transport systems.

MAN Energy Solutions successful ME-GI (-Gas Injection) engine has set a new industrial standard for two-stroke propulsion engines aboard – among others – LNG carriers, container vessels and bulk carriers. The ME-GI engine provides ship-owners and operators with a peerless solution within environmentally friendly and high-efficiency, two-stroke technology, without the greenhouse emissions such as methane slip, which is a hallmark of competing engines.

With the ME-GI engine, two-stroke development has taken a step further by combining the unique properties of multi-fuel combustion and the well-known reliability of MAN Energy Solutions ME-engine. The Diesel principle provides the ME-GI engine with high operational stability and efficiency, including during load changes and fuel change-over, while defining properties such as a stable change-over from fuel to gas with no fuel-penalties are maintained. The ME-GI engine is the most environmentally friendly, technology available within the two-stroke engine segment.

MAN Energy Solutions believes that it is time for what it calls a ‘Maritime Energy Transition’ to find clean, decarbonised solutions for seaborne trade and transportation. Essentially, it is the company’s call to action to reduce emissions and establish natural gases as the fuels of choice in global shipping. It strongly promotes a global ‘turn to gas’, driven by the IMO, and a common approach by the shipping industry and politics to invest in infrastructure development and retrofits.

To date, MAN Energy Solutions’ entire two- and four-stroke portfolio of dual-fuel engines has won almost 400 projects in total, all running on clean fuels such as LNG and LPG, testament to its leadership within this critical market segment.