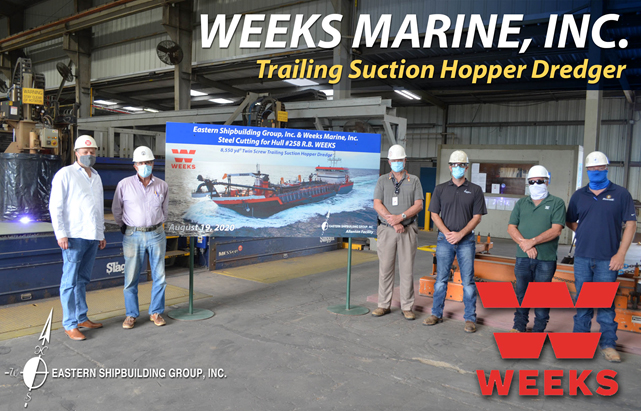 Eastern Shipbuilding Group, Inc. is pleased to announce that on, August 19, 2020, Eastern commenced steel cutting for R.B. WEEKS, ESG Hull 258, a new Trailing Suction Hopper Dredger for Weeks Marine, Inc. following the contract signing four (4) months earlier. The new vessel will be constructed at Eastern’s Allanton Shipyard Panama City, Florida. This is the second Trailing Suction Hopper Dredge project for Weeks Marine, the MAGDALEN, ESG Hull 256 was delivered back in December of 2017.  This reflects Eastern’s commitment to building complex dredge vessels for the US Jones Act maritime industry and secures its long history of being a successful diversified U.S. Shipbuilder supporting repeat customers.

The R.B.WEEKS, (ESG Hull 258) is named in honor of Richard B. Weeks,  a co-founder of Weeks Marine and married to Magdalen Weeks, the namesake of the sister vessel MAGDALEN (ESG 256), also built by Eastern and delivered in December 2017. This new Trailing Suction Hopper Dredge is scheduled for delivery early 2023.