Fresh from a European tour that has taken her to the shores of Malta, Italy, France, Spain, Portugal, Gibraltar, Great Britain, Belgium, the Netherlands and Germany, Damen’s new RSD Tug 2513 Innovation has taken part in towing tests in the Port of Felixstowe, UK. The intention of the tests was to allow the Innovation to undertake a number of tows, in various positions, in a controlled and safe manner, gradually building up until she took on a powered indirect on ultra large container vessel (ULCC) the OOCL Hong Kong, 400m x 14.8m draft, departing from Trinity 9.

The Port of Felixstowe was selected as it enabled Svitzer to participate in the tests and because the location allowed the demonstration of the RSD Tug 2513’s ability for a powered indirect tow. Setting up the demonstration, Damen worked in close cooperation with Svitzer, and with the port as well as pilots from Harwich Haven Authority. The tests took place over 10 days between July 28 and August 6. Before the first towage operation, the Innovation underwent a thorough fit-for-purpose audit, and extensive sea trials carried out by senior special category ship pilots Ian Love and Prithvi Singh, following which she was ready to go. Over the successive days she performed no less than eight towage operations on vessels up to 400 meters in length, in conjunction with tugs from Svitzer’s fleet.

One of the tripping pilots said, “The purpose of this trip out was to test the tug. She proved very responsive, nimble, maneuverable and dry – even going backwards at 13 knots.” 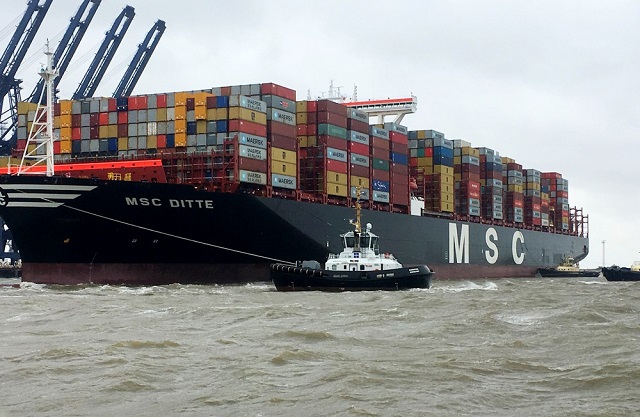 Captain Ian Love reported, “It was unanimously agreed that vibration and noise levels are significantly less throughout the accommodation while towing and pushing, even on full power. The tug’s ability to side step at speed and run ahead of the vessel are without doubt her strongest attributes. Her ability to run astern on one unit at speed – while the stationary unit is creating drag – and yet remain extremely stable – can only be considered an up-lift in safety.”

Captain Love added: “With ever increasing demands made on pilots having state-of-the-art towage available allows us to deliver the service ports require, The RSD Tug 2513 would be a welcome addition to any tug fleet handling ULCC." 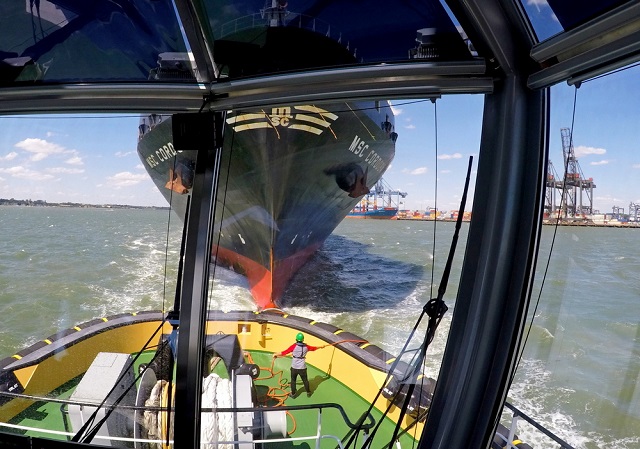 Kasper Nilaus, Managing Director, Svitzer Europe, said: “As the world largest towage provider, innovation in our industry is very close to our hearts at Svitzer, so we are very pleased to have supported the successful test of the Damen RSD tug especially in Felixstowe, where the demand for powered indirect towage is more prominent than anywhere else in Europe.”

Damen Sales Manager Erik van Hattem said, “We have been very pleased with the reception the Innovation has received on her voyage around Europe. Following this success, we have been delighted with the way the vessel has performed during these towing trials. I’d like to extend a heartfelt thanks to Svitzer, the Port of Felixstowe and to the pilots for their support and collaboration in this. Now that the RSD Tug 2513 has demonstrated its capabilities, we are very much looking forward to seeing this next generation tug in operation in ports in the near future.”

Damen has developed the RSD Tug 2513 to meet the demand for tugs that are compact for harbor operations, yet have the power and flexibility to maneuver even the largest vessels, quickly and efficiently. The innovations featured in the vessel design are based on evolved, proven Damen technologies. The tug offers increased safety, sustainability, reliability and efficiency. A significant feature of the RSD Tug 2513 is its low fuel consumption and emissions. The vessel is IMO Tier II compliant and prepared, with a simple, easy retrofit, for IMO Tier III.  The project has received funding from the European Union’s Horizon 2020 program under grant No. 636146.