A recent project by Damen Marine Components has been a big hit with the customer. The project involved the retrofit of a new rudder that delivered performance improvements exceeding the expectations of the ship’s owner and captain.

The vessel involved was the Coastal Standard, a 73-meter short-sea vessel built in 2015. Its owner is Coastal Transportation Inc., a family-owned company that has been transporting cargo along the western coast of Alaska for over thirty years. Last year, Damen Marine Components (DMC) received the order for a Van der Velden BARKE® high lift flap rudder including bulb. BARKE® rudders incorporate a sophisticated flap design with more than 100° flap angle that delivers unbeatable manoeuvrability and course-keeping. The enclosed linkage system of the BARKE® rudder reduces noise levels, provides overload protection and eliminates the entry risk of floating objects, sand and ice. Maintenance requirements are minimal.

Since their introduction in 1984, Damen Marine Components has delivered nearly 1,000 Van der Velden BARKE® rudders to a wide range of vessels ranging from coasters, naval ships and ferries to tugs, fishing boats and superyachts. The rudder was fitted in the spring of 2019, the vessel completed her sea trials in June. Within a short period of sailing-time, the crew of Coastal Standard were noticing and appreciating a significant improvement in the ship’s performance as a result of the new BARKE® rudder.

John Fisker-Andersen, Port Engineer of Coastal Transportation, commented: “The captain gave us a very positive report regarding the maneuvering characteristics. The BARKE® rudder requires less input to keep the vessel on a straight course. Also, it is significantly quieter in the wheelhouse when running at full speed. Compared to the previous situation, the handling characteristics are impressive, and the quality of the equipment is really first class.”

Leo van Zon, DMC area sales manager, added: “During course keeping this slim profile rudder ensures minimal resistance while the progressively operating flap delivers unbeatable performance when maneuvering. After the sea trials conducted by Coastal Transportation I was informed by John that during the swing test, the crew was greatly impressed and had to hold tight on to the railings because of the great lift forces of the rudder. A great achievement from all involved. DMC is delighted that that the crew of the Coastal Standard are enjoying real benefits from the upgrade to her rudder and wishes them safe sailing over the years ahead.” 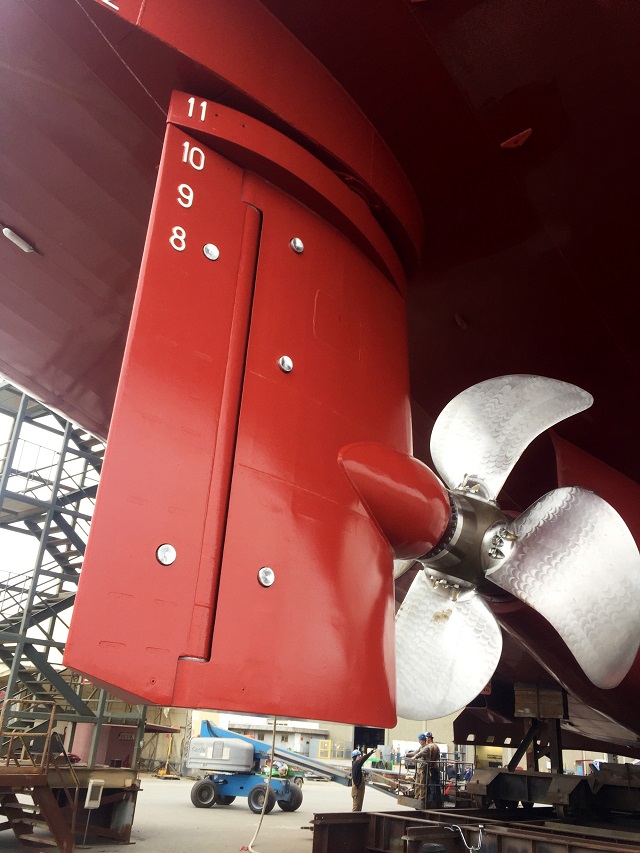