The charity behind the campaign to build the UK's national memorial to the Battle of the Atlantic in Liverpool is announcing the appointment of a new chairman and president to lead the fundraising effort.

Gary Doyle formally a Royal Navy Commodore and now Group Harbour Master at Peel Ports has taken over the chairmanship of the Battle of the Atlantic Memorial (BOAM) from Mike Gretton while Captain Ian McNaught, the last Captain of the QE2 and Deputy Master of Trinity House, becomes president.

Doyle said: "I am absolutely delighted and honored to become chairman of the campaign. I would like to thank Mike Gretton for all the work he has done to get the campaign to this point. Our job now is to build on that work and create a monument that is known around the UK and across the world. With the 80th anniversary of the start of the Battle of the Atlantic later this year it is vital that the contribution of those who served and died is properly remembered for generations to come.

“The Battle of the Atlantic was absolutely critical to the outcome of the war and around 100,000 people lost their lives in the conflict. The purpose of the memorial is to remember them and all the men and women who served at sea, on land and in the air. It will also commemorate the role that Merseyside played as the headquarters of the battle with many of the seafarers taking part coming from the city.

“The role of merchant sailors, whose losses where huge and not properly recognized at the time, will be a key focal point. Education will be at the heart of the memorial and we intend to partner with the Mersey Maritime Museum and Western Approaches Museum to create a world-class learning experience for schools, colleges, universities as well as tourists and the wider public." 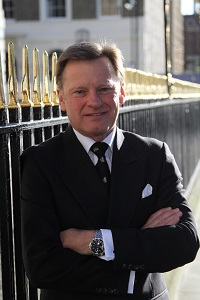 McNaught said: “Having spent 40 years at sea in the Merchant Navy, much of it on the North Atlantic, the story of those who went before me so that I could sail in peace needs to be told, but this is a story of more than the seafarer, it involves many ashore on both sides of the Atlantic who suffered much hardship, and those who fought in the air, all of whom came together to conquer this war of attrition. This is a story of commemoration that will, I hope, inspire a new generation that these terrible events and such sacrifice will never happen again.”

Doyle said the memorial campaign will continue its international work engaging countries and Battle of the Atlantic memorials around the world in partnership.

"The campaign has made contact with a number of countries notably the United States where we have the support of the British ambassador Sir Kim Darroch and also the American Merchant Marine Veterans and Project Liberty Ship in Maryland," he said. "We are now seeking to engage other nations who played a key role in the Battle of the Atlantic both navy and merchant seamen including Poland, Norway, the Netherlands, France, China, India Australia, New Zealand, South Africa, Canada, Belgium and Greece."

Doyle said the campaign will also be lobbying the Government for funding to help meet its target of circa £2.5m pointing out that the D-Day memorial received £20 million in 2017 in LIBOR fine cash and while very deserving, D-Day, which saw 25,000 killed, would never of happened without the Battle of the Atlantic which was the longest running battle of the war and saw 100,000 people killed.

In view of development of Liverpool's waterfront Doyle added that the campaign is undertaking a review of the memorial design to ensure it complements the city’s vision for the World Heritage Site.

For more information on the campaign, sponsorship packages and to make donations visit: www.battleoftheatlantic.org  email: info@battleofatlanticmemorial.org call: 0151 334 8393 Twitter: @BattleAtlantic  Note: overseas donations must be made by cheque.