ABB has won an order from Samsung Heavy Industries to equip two new shuttle tankers, contracted to the world's largest offshore operator Statoil ASA. The deal will provide the vessels with a comprehensive range of future-proof solutions expected to deliver better efficiency and lower emissions than any comparable tanker.

The two specialist DP2 offshore loading shuttle tankers will feature an extensive range of ABB’s power and automation solutions, including the award-winning power distribution system Onboard DC Grid™, tailored to the needs of the next generation of vessels. The power system is highly configurable and especially well suited to the integration of variable speed generators, energy storage and new energy sources such as fuel cells.

The two twin-skeg 125,000 DWT vessels will be delivered by the South Korean shipyard Samsung Heavy Industries in 2019. Ordered by AET, one of the world’s leading petroleum and chemical tanker owners and operators, these vessels will transport oil from the Statoil fields on the Norwegian and U.K. continental shelves to land-based terminals.

“These state-of-the art tankers will have a service life of up to 30 years, operating in the harsh winter conditions of the North Sea. They need to be robust, competitive, capable of meeting anticipated environmental regulations and prepared for new energy sources. With ABB’s solutions on board, these tankers will be future-proofed for technology and regulations for the years to come,” said Juha Koskela, Managing Director, ABB Marine & Ports.

ABB’s integrated power and automation solutions will play a key role in ensuring that AET’s new vessels achieve high fuel efficiency. A shuttle tanker of similar tonnage would normally use 8,000-9,000 tons of fuel a year, while ABB’s solution can contribute to annual fuel savings of up to 1,000 tons.

The vessels will also enjoy the benefits of having the ABB Ability™ Marine Remote Diagnostic System on board. The system will allow reducing on-call visits of service engineers up to 70 percent, and maintenance costs up to 50 percent, while increasing safety and reliability through extended and predictive monitoring.

The power system on board will be controlled by ABB’s integrated Power and Energy Management System (PEMS), which will enable generators to run at variable speeds in the optimal way. This contrasts with traditional AC systems, where generators run at fixed maximum speed irrespective of the power demand on board, leading to excessive engine wear and poor fuel efficiency at lower loads.

Together with PEMS, ABB’s Integrated Control and Monitoring System will enable the crew to operate the vessels’ steaming and DP operations at the lowest possible specific fuel consumption.

The main and auxiliary engines of the tankers will have the dual-fuel option, which will allow them to operate on LNG, as well as traditional fuel.

Twin two-stroke engines will act as the main source for all power using the Onboard DC Grid shaft generator solution for all of the operational modes. The combination of the Onboard DC Grid system and the two-stroke engine shaft generator will result in the vessels burning less fuel and generating lower emissions, compared with the more traditional alternative that relies on four-stroke auxiliary engines.

“It is clear that the next generation of ships – electric, digital, and connected – spells a bright future for DC-based electric propulsion,” said John Olav Lindtjørn, Global Product Manager for Onboard DC Grid, ABB Marine & Ports. 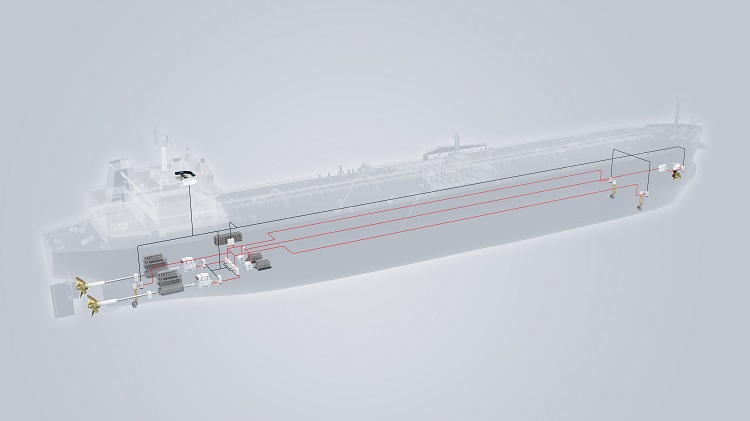