The Famous and Formidable Mary Patten

After going back and forth on who to write about, I kept coming back to my time spent at the U.S. Merchant Marine Academy and the woman whom the hospital was named for: Mary Patten.

To clarify, if one were to visit the campus, he/she would notice that nearly all of the central buildings on Kings Point’s campus have famous nautical names attached to them (e.g. Melville Hall). Therefore, after reading this article, it will come as no surprise that there is a building honoring Mrs. Mary Patten. Mary distinguished herself as the first female commanding officer aboard an American merchant vessel and she did so under very trying conditions. Let’s dig into her story now: 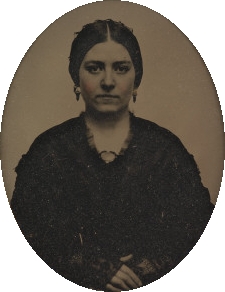 Married, pregnant and barely 20 years old, Mary A. Patten set sail from New York to San Francisco with her husband, Captain Joshua Patten, aboard the clipper ship Neptune’s Car in mid-1856. As this was prior to the building of the Panama Canal, Captain Patten’s only route was around the dreaded horn of South America, which befell many a victim over the years. Owing to its strong winds and forceful seas, the journey was extremely treacherous and was made worse by the fact Captain Patten had to fire his First Mate for neglect of duty. Taking on the responsibility of Captain and First Mate proved to be too much for Patten, and he came down with fatigue and brain fever (an illness that was prevalent in the 1800s). It was then that Mary took over command of the ship for her husband and assumed all the duties that fell under her husband’s purview (which now also included the First Mate).

Having studied navigation on previous trips, Mary took over all navigational duties and also served as medical officer in order to take care of her ill husband. In addition to navigating the ship through Cape Horn and around South America, she dedicated the rest of her time to nursing her husband and studied the best ways to treat his worsening condition.

As if the situation didn’t carry enough adversity, at one point during the voyage the First Mate (who had already been relieved of his duties) attempted to inspire a mutiny against the Pattens. Thankfully, the crew put their confidence in Mary and set their sights on finishing the voyage in San Francisco.

After spending 120 days at sea and battling one continued hardship after another, Mary and her crew eventually landed in San Francisco, besting three of her four competitors and earning the admiration and respect of the shipping company. Forever grateful she safely delivered her ship and cargo, the owners rewarded Mary with a check for $1,000. 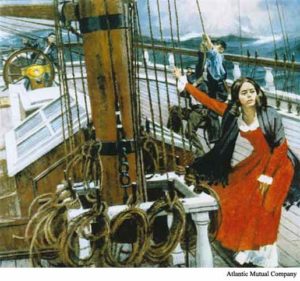 Astonishingly, she later revealed that her busy schedule throughout the transit didn’t permit her the time to change out her clothes for 50 days. Mary and her husband, who was still in critical condition, eventually returned home to New York, where she delivered her baby boy. Unfortunately, her husband would never really recover from his sickness and passed away nearly three months after the birth of their son.

The formidable Mary Patten is a testament to the strength and courage of women everywhere and her story, while very sad on many accounts, is one that exemplifies the old cliché that behind every great man is an even better woman.

After Mary returned home to New York, the memories of that trip continued to haunt her, and her pain was ever present. When interviewed later about her time in command of Neptune’s Car, she would always point to the fact that she was just doing her duty, but we know better. Much like the men and women that enter into the service during wartime under the pretense that they are just doing their duty, we know they are heroes and that their feats are extraordinary. And so it is with Mary Patten and all the women who have stood up when the maritime industry has needed them to be extraordinary.

Andrew Zimmerman is a contributor at WomenOffshore.org and the author of the WWII narrative We Got Each Other Home: The Story of WWII's Legendary LST (2013), which describes one of the most decorated and underrated ships of the entire war. As a graduate of the United States Merchant Marine Academy, he has experience on commercial ships and tugboats all over the world and also worked for several years in the Navy shipbuilding industry. Andrew, his wife and two boys live in New Philadelphia, Ohio, where he is a high school social studies teacher.