Blog: Setting Sail for the Med

Human Rights at Sea Intern, Daniel Shepherd, is a member of the Sea-Watch crew. The vessel is working in the Mediterranean assisting with the rescue of migrants:

“In recent weeks over 30,000 migrants have attempted to cross the Mediterranean from Libya to Lampedusa, Italy. Of that number over 1200 deaths have been reported as a result of overcrowded vessels capsizing under the sheer weight of the passengers on board. Often fleeing persecution and conflict ridden environments, with the advent of fairer sea conditions it is estimated that 2015 will see record numbers of migrants from countries as geographically disparate as Syria, Somalia, Eritrea, Mali, Nigeria and Libya attempt the perilous crossing in a bid to better their lives and the lives of their families.

“Through its search-and-rescue (SAR) mission, Operation Triton, the EU up until last week operated at one third the size and cost of its predecessor, the Italian-led search-and-rescue mission, Operation Mare Nostrum. The general opinion in Brussels was that the greater the rescue capability was in the Mediterranean the greater the likelihood more migrants would attempt to enter Europe via these means – the so-called ‘pull’ factor.

“So, in their wisdom, significant cutbacks were made with respect to EU SAR policy. However, it didn’t take long for this hypothesis to be disproved with sources from the United Nations High Commissioner for Refugees (UNHCR) and the International Organisation for Migration (IOM) recording a death toll up almost twenty times on the number recorded this time last year.

“In the wake of the recent human tragedy brought to us live on our screens and over our radio waves, European politicians were forced to act. EU spending on SAR in the Mediterranean has subsequently increased to that of the level under Operation Mare Nostrum, equating to approximately €9 million per month. Coupled with increased spending a ‘ten point plan’ has been initiated to address various aspects of the migration pattern and consequential loss of life. The effect of such measures waits to be seen. 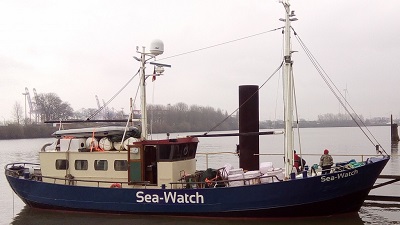 “However, one group of friends in Brandenburg, Germany saw the shortcomings in European politicians’ ways a long time ago and set in motion their own response to the devastating loss of life at sea. On the eve of the 25th Anniversary of the Unification of Germany, spurred on by the memory of East German migrants fleeing the iron fist of Soviet rule in search of a better life, Harald Hoppner, Matthias Kuhnt and other like-minded friends decided to buy a boat and sail it to the Mediterranean in a bid to privately act in support of international rescue efforts, raise international awareness and, where safe and able to do so, render assistance to those in distress at sea. Their vision, a civil sea rescue service.

“Sea Watch, the Organisation and eponymously named vessel, has thus embarked on a voyage of enlightenment to help raise awareness on the plight of the migrants and the duties incumbent upon European countries to protect the lives of vulnerable people. As part of their endeavor they have enlisted the support and expertise of other civil society organizations working in the field of human rights. It wasn’t long before Human Rights at Sea (HRAS) was contacted and before long, as part of my internship with HRAS, I had been assigned the privilege of working with the Sea Watch project.

“Over the course of the next two months I will be regularly reporting on the progress of the Sea Watch project and some of the legal and human rights issues surrounding the migration pattern in the Mediterranean. The topic raises a number of interesting political, legal and security related questions, many of which remain unanswered.

“As followers of HRAS will know, the cutting-edge nature of the work undertaken by the organisation does not shy away from entering uncharted waters. With respect to the phenomenon of migration from North Africa to Europe, true to its cause, HRAS once again finds itself at the helm of the issues of the day facing the maritime community.

“And so our voyage begins. All aboard for what promises to be a very real and comprehensive insight into one of the most significant events to reach European shores in modern times. Until next time, I wish you fair winds and following seas.”