Work Proceeding on the Largest Containership LNG Conversion to Date

Work is underway on a unique project converting a traditional containership to be able to use liquefied natural gas as its fuel. Contracted in March 2019, conversion of the 15,000 TEU Hapag-Lloyd container ship Sajir will be the first mega-container vessel to be converted to dual-fuel operation.

“With this unique pilot project, we hope to learn for the future and to pave the way for large ships to be retrofitted to use this promising alternative fuel. However, our long-term goal continues to be CO2-neutral shipping operations using synthetic natural gas (SNG),” said Richard von Berlepsch, Managing Director Fleet at Hapag-Lloyd AG.

While it is not the first time a container vessel has been converted to use LNG, it is the largest conversion of its kind and is viewed as a pilot project for the shipping industry. Built in 2014 at Hyundai Heavy Industries in Ulsan, South Korea, the Sajir has a length of 1,207 feet and is 149,360 DWT. The vessel has a speed of 21 knots, and according to Hapag was designed for the potential conversion. The tank placement is close to the engine room which will allow the connection between the aggregates and the gas treatment system to be made using very short pipelines. 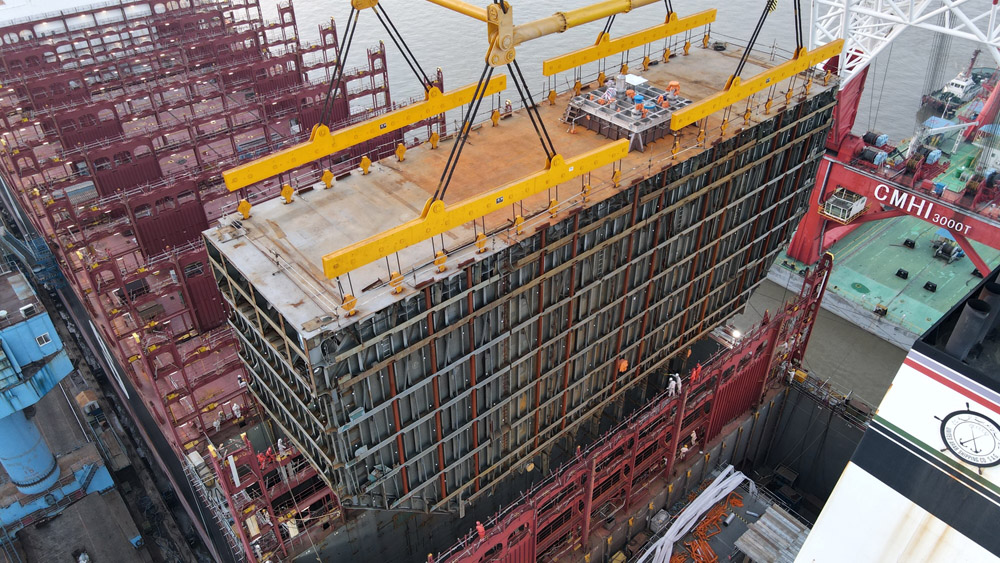 The process of retrofitting the Sajir for LNG propulsion began on September 2, 2020, at the HuaRun DaDong Dockyard in Shanghai. During the first phase, the ship’s hold was prepared for the installation of the LNG tank. The DNV GL approved 6,700 cubic meter gas storage system will occupy an area equivalent to 350 containers, including the pipework between storage and engine.

To keep the time in dry dock as brief as possible, the tank was manufactured and assembled before the vessel reached the shipyard. Other components for the gas treatment as well as for the engines and the aggregates were also prepared to the extent possible in advance.

After three weeks of preparation work, a floating crane was positioned next to the Sajir to lower the 1,300-ton LNG tank into place. The tank will now be welded to the hold while the main engine and the auxiliary diesel engines are converted to dual-fuel operation for LNG and low-sulfur fuel oil. 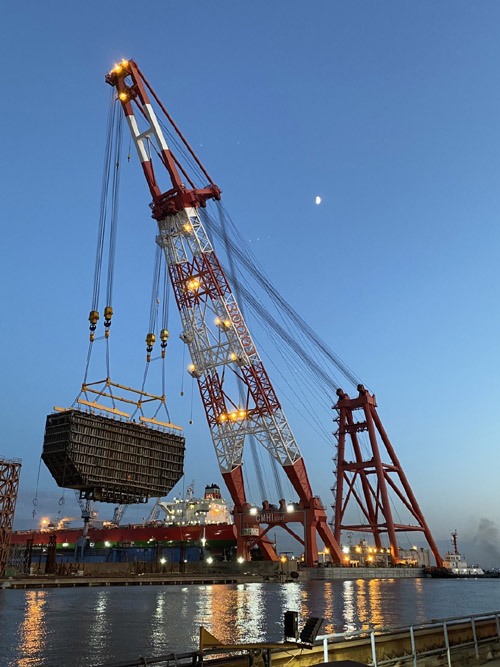 The conversion project is costing approximately $35 million. The timeline anticipates that the conversion and initial test voyages will be undertaken in early 2021. Hapag also noted that because LNG-powered ships have to be handled in a completely different way the crews will also be undergoing intensive instruction courses during this time.

Once completed, the Sajir will be redeployed in the Asia-North Europe trade lane. The size of the LNG tank will mean the vessel bunkers twice per round trip between Asia and Northern Europe. The plan will be to operate the vessel using LNG but to also be able to use low-sulfur fuel oil as a backup.

According to Hapag, the Sajir is one of the 17 vessels in the fleet that was originally designed to be LNG-ready. Its 16 sister ships are also technically prepared for retrofitting, although they have not said if they would order additional conversions.

While the Sajir is seen as a pilot for the conversion of large boxships, she joins a growing roster of large container ships. Last week, CMA CGM completed the official commissioning of the world’s largest LNG-powered containership. The CMA CGM Jacques Saade is a 23,000 TEU boxship. She is the first of a class of nine ships being built for CMA CGM and each measures 1,312 feet in length with a 200-foot beam and draught 52 feet. Being newly built and designed for LNG operation each has an LNG tank with a capacity of 18,600 cubic meters, giving the ships the ability to complete round trips between Asia and Europe between refills of the tank.