Prospective passengers aboard the world's largest cruise sailing ship, the Wind Surf, will now have the option of booking a suite located within the officer's quarters, just behind the bridge.

During a recently-completed refit, operator Windstar added an "officer's suite" within a crew-only berthing area. The company believes that it is likely the only suite of its kind at sea; perhaps the only parallel might be the quarters for paying passengers aboard a merchant ship, a very rare "cruise" offering available only through boutique travel agencies. As such, Windstar believes that the Wind Surf's new suite might be "the ultimate true cruise enthusiasts’ accommodation."

“We renovated this very unique suite with more of a nautical theme to reflect its exclusive location tucked away just behind the Bridge,” said Windstar President John Delaney. “Guests in this suite share exclusive company with the captain, chief officer, hotel manager and chief engineer. It’s absolutely 180 degrees from ordinary with nothing else like it in the industry.” 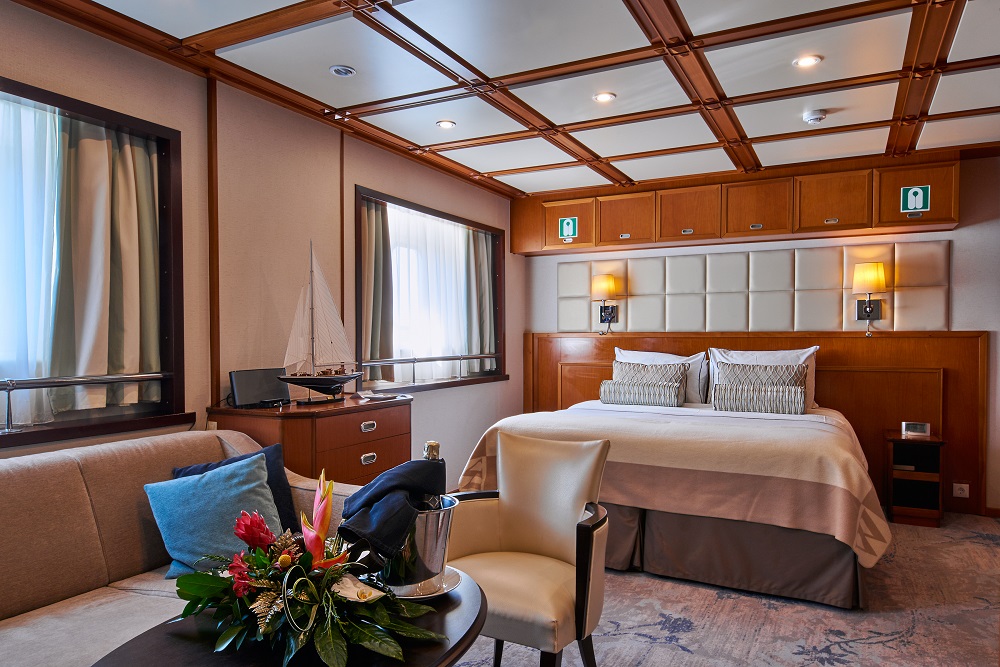 The new 242-square foot suite has a bedroom, a full bath with Jacuzzi tub, and a living room with a wide screen television. Décor includes a sextant, a Wind Surf print, a model of a J-class sailing ship and binoculars. If the occupants wish, they may step next door onto the bridge, as Windstar has an "open-bridge" policy.

In addition to the new high-end suite, Wind Surf now has 16 new guest rooms, bringing the capacity on board to 342 guests (up from 310). Additional crew accommodations were also built in, yielding a continued 1 to 1.5 staff to guest ratio. Wind Surf also received an enlarged lounge area and a new spa and wellness center, run by One Spa World.