White smoke that was coming from the car carrier Golden Ray currently being salvaged in St. Simons Sound, Georgia, has now been stabilized. The cause of the smoke is currently unknown.

The Unified Command says that the situation is being monitored and a safety boat and a tugboat equipped with firefighting equipment are on-scene. Air monitoring around the vessel and in the community has shown no signs of impact. Water was sprayed on the vessel in order to contain the smoke.

The 20,000dwt vessel partially capsized on September 8 in St. Simons Sound, Georgia while heading out to sea with 4,200 vehicles on board. The pilot on the Golden Ray, Captain Jonathan Tennant, deliberately grounded the vessel reportedly in response to a fire on board. All onboard were rescued safely, although it took around 30 hours to free four crewmembers trapped in the vessel's engine room. An investigation into the cause of the casualty continues.

More than 250,000 gallons of fuel has been removed from the Golden Ray to date. Currently, there are more than 400 people involved in the response with 80 vessels.

Maritime experts engaged in the response have determined that it is not possible to safely right and refloat the vessel in a fully intact condition. Consequently, Unified Command is developing plans to remove all of the Golden Ray’s hull, components and cargo by disassembling the vessel in place. 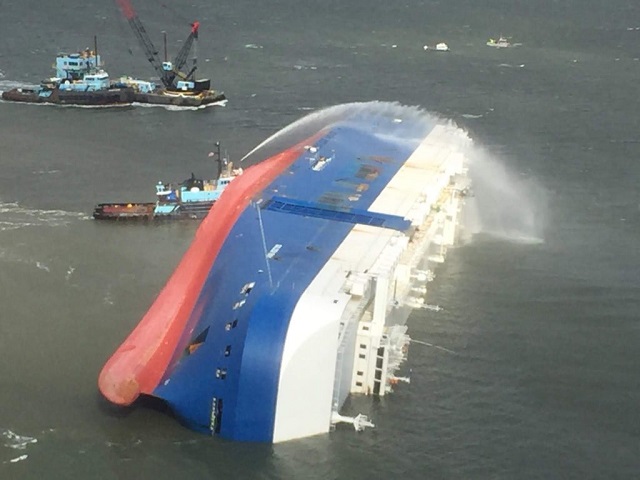