Images were released showing the end of the forward section of the grounded bulker Wakashio. With the scuttling now completed efforts are focusing on the remaining stern section with the accommodations block and bridge as well as the ongoing cleanup efforts. 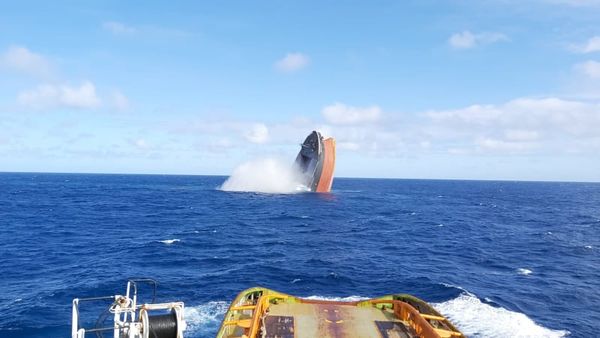 According to a statement from the salvage team, the scuttling was competed on August 24, with the forward section plunging below the waves at around 3:30 p.m. local time. The forward section had been towed to the selected position late last week but the operation had been slowed both by rough seas and the efforts required to sink the ship. The salvage crew went aboard to cut holes through the Wakashio's bulkheads to hasten the demise of the vessel. The crew was also seen spraying water into the open holds of the ship.

The scuttling proceeded despite the ongoing protests from environmentalists and other groups. The government, however, said that this course of action was selected after discussions with the broad range of experts who have traveled to Mauritius to assist.

Greenpeace Africa issued another long letter to the government of Mauritius which included a call not to scuttle the Wakashio. “Under no circumstances should the wreck of the ship simply be sunk, we are particularly concerned about this latest proposal, and we urge you to consult internationally on what alternative options may exist, while taking steps to prevent the ship from further breaking up or sinking. Sinking this vessel would risk several whale species and contaminate the ocean with large quantities of heavy metal toxins, threatening other areas as well, notably the French island of La Réunion.” 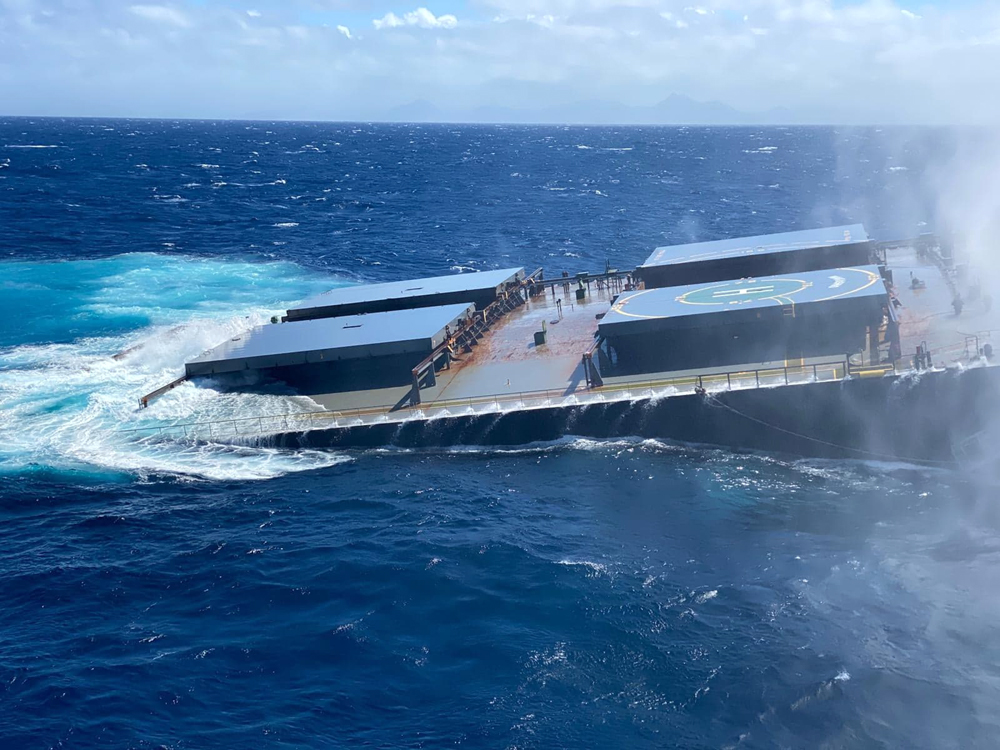 Efforts on the remaining stern section of the vessel have shifted to removal both of lose debris that could float away as well as potential pollutants. The salvage team had previously reported that they have completed the removal of the residual oil from the stern section. While no firm plans have been announced for the stern section, the owners had previously said that it believed it would also be refloated and scuttled.

In the waters around Mauritius, 40 local fishermen are working with 10 boats from the salvage operation to remove the artisanal booms that had been strung when the ship first began to leak oil. The crews are now relocating approximately 1,000 meters of absorbent booms while the skimming operations and shoreline cleanup continues.

According to a government statement on August 24, a total of 1,122 tons of liquid waste has been collected and 792 tons of contaminated solid waste. Air and water testing are also monitoring for Volatile Organic Compound (VOC) or petroleum odor both on shore at public places such as schools as well as along the shoreline. The government reports a mild petroleum odor at Mahebourg Waterfront, a high pH content at Grand River South East, and oil and grease content in the Grand Port area.

The investigation into the cause of the ground is also ongoing. The captain of the ship, who was arrested by Mauritius, is tentatively scheduled to make another court appearance later in the week. In the meantime, the Japanese news outlet Kyodo News is now reporting that the ship moved closer to the shore seeking a cell phone signal so that crew members could call home to check on their families during the pandemic. The news outlet repeats the reports of the birthday party, which they report the captain attended and the acknowledge the serving of alcohol at the party. They report however that they do not know which officer was on bridge watch at the time of the grounding.