Salvage work is getting underway more than seven months after the bulk carrier Wakashio went aground off Mauritius causing one of the worst environmental disasters in the country’s history. The efforts to remove and recycle the stern section of the 203,000 dwt bulker are commencing as a Court of Investigation is also underway in Mauritius providing the officers’ accounts of the accident.

The Minister of Blue Economy, Fisheries, Marine Resources and Shipping, Sudheer Maudhoo, conducted a site visit, on February 17, to review the situation and receive a briefing. The work, which has been delayed since January due to rough seas in the area, was delayed one additional day before it could begin. The Chinese salvage company Lianyungang Dali Underwater Engineering Company was awarded the contract for the removal of the stern section, but it had been unable to anchor its giant crane at the site due to the weather.

The salvage effort is being by removing sections of the superstructure and is expected to continue 24 hours a day. Two tugboats and three barges are also on site. According to the Minister, the dismantling of the stem will be carried out within 25 to 30 days, but is subject to weather conditions. The removal will be carried out in four to five phases, with the sections being taken to port to be decontaminated and then handed over to a recycling specialist for scrapping. This differs from the bow section of the Wakashio, which was refloated and despite protests from environmentalists and other groups was sunk in deep water.

The Minister said that additional damage to the reef at Pointe d’Esny was unavoidable during the removal process as the crane had to be anchored and the remaining piece of the vessel has also become more embedded in the reef since going aground on July 25, 2020. While they believe that the oil from the engine room had all been pumped from the vessel after it cracked and spilled fuel oil into the bay, booms have also been deployed in case there are further oil leaks. 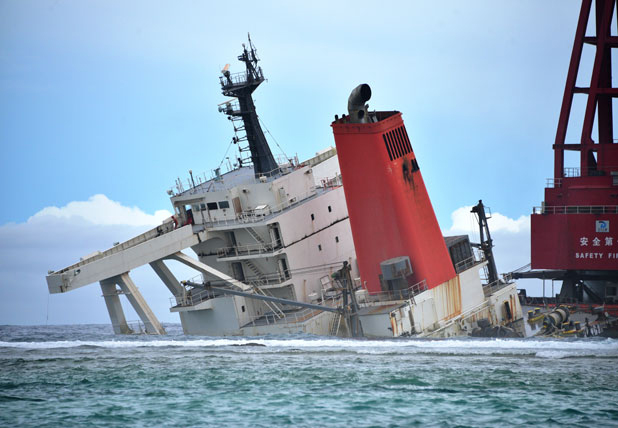 All of this is happening as the officers of the Wakashio who have remained in custody on the island made their first public appearances in court. While most of the details leading up to the incident had already emerged during the pre-trial investigations and in statements from Panama as the ship’s Flag State and Mitsui O.S.K. Lines as the owners, there has been finger-pointing and cross accusations in the courtroom.

In court, they played an audio recording from the ship's Voyage Data Recorder (VDR) that captured the conversation about steering close to shore. In his testimony, the captain also said he had done similar maneuvers in the past, including in 2019 sailing near the island and lingering offshore while they had a signal to communicate. The captain admitted having left the bridge to go to the previously reported birthday party taking place in the crew mess, but he also admitted for the first time that he had been drinking at the party and as such did not want to intervene in the navigation when he returned to the bridge. The chief officer told the court the captain was seated in the pilot’s chair using his phone trying to get a signal when the vessel went aground. After the grounding, the captain issued commands trying to back the vessel off the reef.

Other details that reportedly emerged in court were that two of the vessel’s ballast pumps were not working due to a short circuit preventing the ship from fully deballasting after the grounding. The engineers also said they were concerned about causing an environmental issue if they deballasted polluted water to which the investigators highlighted that the regulations permitted the ship to dump mixed water in an emergency that was endangering the ship.

Both the Japanese shipowner and the ship manager have taken responsibility for the failures of the crew. At the end of 2020, they presented new policies and procedures that they said were designed to address the deficiencies and improve the safety and operation of their ships.