Four centuries ago this August, English settlers at Jamestown inaugurated the British colonies' participation in the African slave trade.

On or about August 20, 1619, the first of two British privateer ships - the White Lion and the Treasurer - arrived at Point Comfort, Hampton, a settlement in what is now the state of Virginia. The privateers had recently captured a consignment of slaves in a raid on the Portuguese merchant vessel San Juan Bautista, and they traded about 20 of these individuals in exchange for food. Then-governor George Yeardley completed the sale and later recorded it in a letter to the Virginia Company of London, the British trading company established to colonize the Eastern seaboard.

However, historians say that the White Lion transaction at Hampton represented an important turning point for the American economy and for international trade. Over the next 250 years, the enslavement of Africans created great wealth and economic opportunity for certain segments of American society. In the decades leading up to the Civil War, booming slave-enabled cotton production in the South drove advances in industrialization and finance, creating new global commodities markets. Bankers and merchants in the North capitalized upon these opportunities to grow their businesses, lending funds for the expansion of slave plantations and providing shipping services to carry slave-grown cotton overseas. In the UK, cotton fueled the rapid growth of the textile industry, a leading force in the industrialization of Britain. 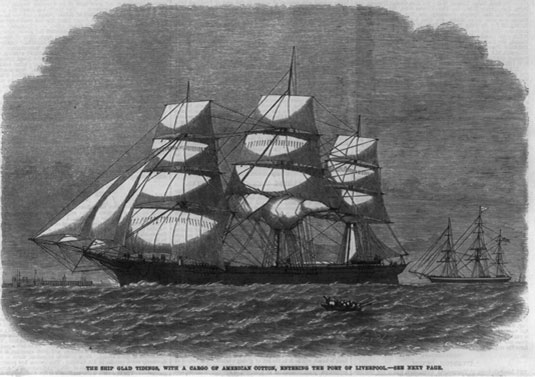 The merchant ship Glad Tidings calls at Liverpool, England with a load of cotton from the United States, mid-1800s

In Virginia, an array of historical associations and government agencies are planning commemorative events throughout the week to mark the occasion. At Fort Monroe, the present-day site of the landing, the National Park Service is holding a commemoration from August 23-25 with tours, concerts, spiritual services and keynote speakers. Kentucky lieutenant governor Jenean Hampton, former governor Douglas Wilder, Congressman Bobby Scott, Sen. Mamie Locke and former mayor Howard Lee will be in attendance.