Virgin Voyages announced just two months before the scheduled maiden voyage of its third cruise ship that it has decided to defer the ship’s launch for nine months. The brand, which has promised to shake up the cruise industry, highlighted a string of achievements in the 10 months since it launched despite the challenges created by the pandemic while saying it would use the time to prepare and complete its next round of funding.

The Resilient Lady is scheduled to be the third cruise ship of the line and sister ship to the line’s first two cruise ships, Scarlet Lady which began cruising in August 2021 from the UK and now the Caribbean, and Valiant Lady which began cruising in Europe in March 2022. The Resilient Lady is nearing completion at Fincantieri’s Sestri Ponente near Genoa, Italy. In April, Virgin Voyages reported that the ship had completed sea trials achieving 23 knots and testing her safety systems, automation, power generation, and propulsion systems.

“After very careful and deliberate consideration, Virgin Voyages has decided to defer the launch of our third ship, Resilient Lady, until Q2 of 2023,” a spokesperson for the cruise line announced. “While we've successfully launched two ships in the span of less than a year, the fact remains that there are challenges facing the industry as a whole, and we're not immune to those. It was a tough decision, but we want to ensure that when Resilient Lady does hit the water, she'll be ready to execute brilliantly.”

The cruise ship had been scheduled to start sailing for Greece in mid-August. In October she was to reposition to San Juan, Puerto Rico for a program of winter cruises in the southern Caribbean. According to the company, the Resilient Lady will remain in Genoa getting on-board work completed, before entering service in May 2023. The line’s fourth cruise ship, the Brilliant Lady, is also due to enter service in 2023. 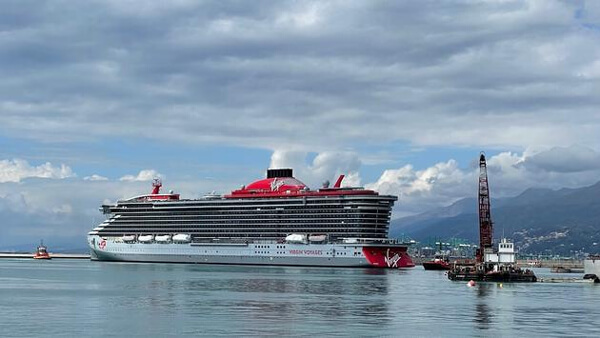 Tom McAlpin, CEO of Virgin Voyages said the brand is not immune to the global challenges, including supply chain obstacles, a level of regional uncertainty for international travelers in countries in East Europe, crewing challenges based on government regulations, and restrictive COVID entry requirements back into the U.S.

“We remain focused on delivering brilliant vacations, and this pause will ensure we will be ready to go on Resilient. The travel industry is recovering well, and this month, we’ve seen record bookings, a significant increase in onboard spend, and we’re currently seeking to close out our next round of funding,” said McAlpin.

The timing of the launch of the Virgin Voyages cruise brand has been repeatedly challenged by COVID-19 and world events. The cruise line was scheduled to start revenue cruises on April 1, 2020, but instead was forced to lay up its first ship for 17 months before starting a mini-program in the UK in August 2021. They finally started cruises from Miami in October 2021 while they had also taken delivery of the second cruise ship and laid her up in Italy until her launch this spring. They had also planned to feature Cuba as a destination before the Trump Administration stopped Americans traveled to the island. Aboard the ships, Virgin has also made several adjustments including “refreshing cabins” on both Scarlet Lady and Valiant Lady adding wooden beams and additional wood finishings along with artwork as well as increasing drawers and storage space.

“As a new brand that is just getting started, we’ve accomplished so much this past year,” said McAlpin. He reports that momentum is building and the next round of funding will set the company up for continued growth.