Video: USCG Offloads $1B in Narcotics After Record Interdictions

Coast Guard Cutter James' crew offloaded more than $1 billion in illegal narcotics on Thursday, February 17 at Port Everglades, Florida after a 90-day patrol as part of a task force operating in the Eastern Pacific and the Caribbean.

“The best part of my job is being able to stand here at the end of a patrol and provide visibility on the incredible efforts from crewmembers who have volunteered for the challenging and dangerous duties to keep our shores safe,” said Capt. Todd Vance, the commanding officer of the Coast Guard Cutter James. “Each interdiction is a complex evolution and no two interdictions are the same. In fact, the James' crew conducted simultaneous interdictions of two go-fast vessels 55 miles apart this patrol, showcasing their dedication and professional execution of the counter-drug mission.”

The drugs, which included approximately 54,500 pounds of cocaine and 15,800 pounds of marijuana, worth approximately $1.06 billion were interdicted in international waters of the Eastern Pacific Ocean and Caribbean.  The combined patrol involved six Coast Guard cutters, James, Stone, Griesser, Northland, Diligence, and Margaret Norvell, and USS Milwaukee. Joining the patrol was His Netherlands Majesty’s Ship Holland and the patrol was supported by Coast Guard Station San Juan.

Numerous U.S. agencies from the Departments of Defense, Justice, and Homeland Security cooperated in the effort to combat transnational organized crime. The Coast Guard, Navy, Customs and Border Protection, FBI, Drug Enforcement Administration, and Immigration and Customs Enforcement, along with allied and international partner agencies, play a role in counter-drug operations.

The Coast Guard Cutter James which brought the combined seizures from the patrol to port is a 418-foot national security cutter homeported in Charleston, South Carolina. 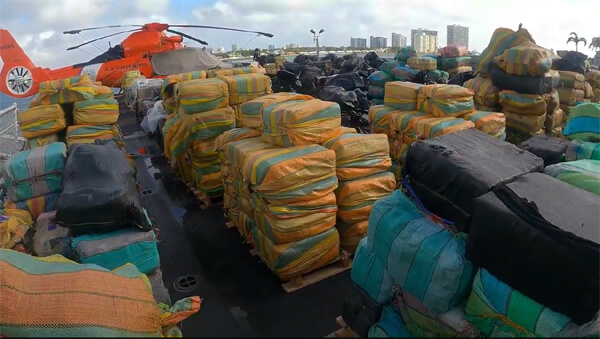