Sea trials are underway on the first installation of an automated kite system for wind-assisted propulsion on a commercial vessel. The French company Airseas reports that it is making good progress on its tests during Atlantic crossings aboard a Ro-Ro cargo ship, helping it to validate design concepts and perfect elements of the system and its operations.

“Testing a brand-new technology that had never been used in the maritime sector before was always going to bring its share of technical challenges,” said Airseas’ technical team. “An additional challenge is the fact that we have to schedule our tests while respecting the operational constraints of a busy commercial ship.”

Spun off from the aviation industry’s Airbus in 2015, Airseas is using its aeronautical experience to develop its sail kite to provide wind propulsion assistance for large commercial vessels. The concept calls for the full-size version of the Seawing, a 1000m2 parafoil, to fly at altitudes of nearly 1,000 feet capturing the stable higher altitude winds to assist vessel propulsion.

According to Airseas, over approximately 500 feet above sea level the winds are more stable and stronger in strength. Their research shows that the Seawing would have a pulling power of up to 100 tons meaning it can contribute to propulsion for a ship of over 200,000 tons and over 1,000 feet in length. They project fuel savings on average of 20 percent by deploying the kite sail. 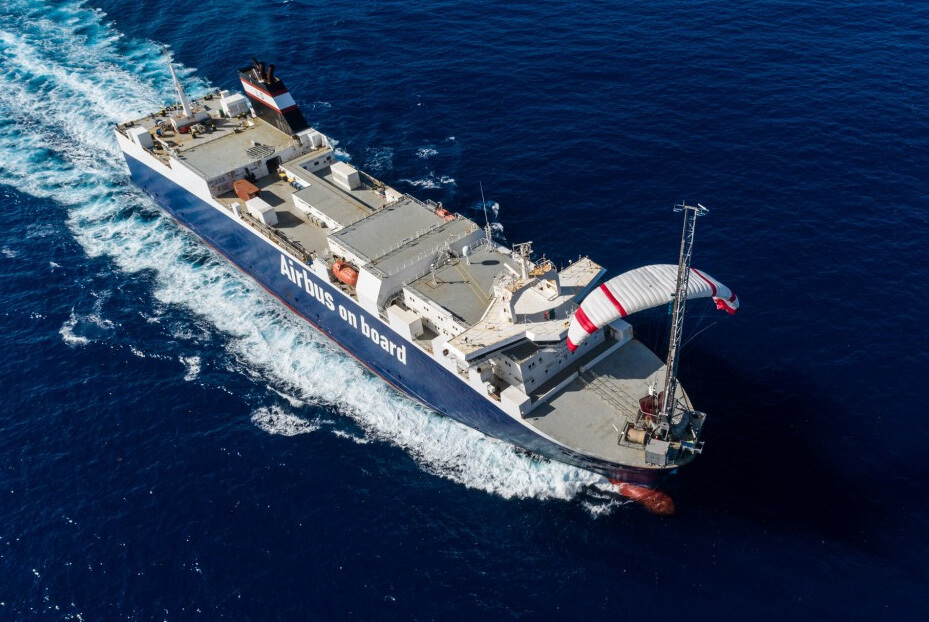 According to Mathieu Reguerre, Flying Components Project Manager, and Benoît Gagnaire, Co-Founder & Chief Technical Officer, Airseas, the process is helping them to validate numerous design choices that were incorporated into the patented system. During the first phase, they report that they were able to validate the complex steps related to folding and unfolding the wing, which required extensive testing of the hardware and software components to ensure that they kept working together consistently at sea. They noted that the most delicate part of the test is the take-off and landing for the wing which requires compensating for the movement caused by waves and low-altitude turbulence. During the tests, they were able to develop an automatic movement on the main winch used as part of the deployment process.

The team has both a 250 m2 version of the wing and a 500 m2 version aboard during the testing. They report the Seawing is flying more than 650 feet above sea level. After completing the testing for folding and unfolding, take-off and landing, they also tested the wing in flights at altitude. In the next phase, they will test the Seawing in a broader range of weather conditions and fine-tune the automation system.

“Seeing the Seawing in action on a commercial vessel is such a proud moment for us, and the culmination of years of meticulous research and development,” said Vincent Bernatets, CEO of Airseas. “With these strong initial results, we’re more determined than ever to keep testing the system and collecting data, and accelerate our mission to scale up and rapidly deploy wind propulsion technology on vessels around the world.”

In addition to the first system testing for their launch customer Airbus aboard the Ville de Bordeaux, Airseas reports it has also received orders from Japan’s K Line for five Seawing systems. Japan’s classification society, Nippon Kaiji Kyokai (ClassNK) issued an Approval in Principle (AIP) for the wind kite system in July 2020. K Line announced plans to begin testing the system possibly by the end of 2022 on two Capesize bulkers and recently said they plan to expand the tests to include three post-Panamax bulkers. K Line has an option with Airseas to equip up to 51 vessels in total with the system.