Images began appearing on social media showing the shoreline of a remote Russian village littered with wood cargo. An investigation by the Russian authorities is reporting that a cargo ship operating from the Russian timber company Terneyles dumped a portion of its cargo overboard and it then began washing up on shore and clogging the entrance to the harbor.

The investigation into the circumstances of the incident is still underway but the authorities are reporting that a general cargo ship named Maria (6,280 dwt) and registered in Togo lost the lumber overboard. It is unclear when or where the vessel had loaded the cargo but on August 5 the vessel was departing from the seaport of Olga in southeast Russia along the East Sea of Japan. 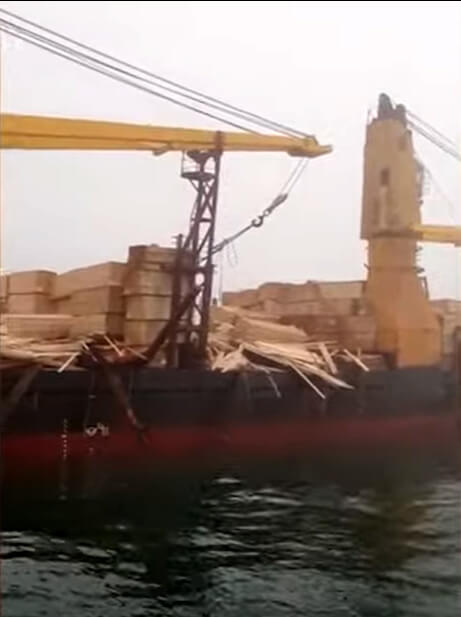 Collapsed cargo on the deck of Maria

The vessel was operating with a crew and some reports said the cargo of lumber and veneer appears unstable or possibly had shifted as the vessel was departing port. Three days after the vessel departed Olga, residents found nearly two-thirds of a mile of the coastline covered with the lumber and veneer cargo. Reports said that local fishermen were complaining and the port had to be closed for a time while efforts were taken to clear the floating wood from the harbor entrance.

The vessel was ordered to anchor in a secure cove while attempts could be made to stabilize the cargo. Images show large portions of the stacks intact although in places the wood is loose and hanging from the side of the ship. It is unclear if the vessel encountered weather or what caused the cargo to shift and fall overboard. There were no reports of injuries among the crew.

“Since the cargo was purchased by the consignee and insured, material losses were minimal. Most likely, the company will have to pay for the reloading of the vessel,” reported the head of the regional Ministry of Forestry, Konstantin Stepanov to the local media.

Images show heavy equipment being brought to the beach to begin the process of recovering and clearing the cargo.