It was a red-letter day for the U.S. merchant marine, Fincantieri Bay Shipbuilding, and most of all the Interlake Steamship Company. The company’s newly built bulk carrier, the Mark W. Barker, departed the shipyard on her maiden voyage after three years of construction. She is the first U.S.-built Great Lakes bulk carrier constructed in nearly 40 years and the first new build for the company since 1981.

“This is a monumental day for our company and the U.S. flag fleet as our much-anticipated freighter departs on her first voyage in what will be a long life of service on the Great Lakes,” says Mark W. Barker, President of The Interlake Steamship Company and namesake of the vessel. “The construction of this vessel, which was made from steel manufactured in Indiana, from iron ore delivered by vessel from Minnesota, reinforces our long-term commitment to shipping and delivering essential cargoes for our customers throughout the region.”

The vessel, which is 639 feet long, and 28,000 dwt, according to the company incorporates forward-looking design elements. A high-efficiency propulsion plant will improve her efficiency and lower emissions. She was also designed with improved maneuverability and enhanced cargo handling capabilities. She is manned with a crew of 21.

The M/V Mark W. Barker departed the Sturgeon Bay, Wisconsin shipyard this morning for her 110-mile journey to Port Inland, Michigan. Arriving at her first port, she will load stone for delivery to Muskegon, Michigan. Once delivered, that stone cargo will go into ready-mix concrete production. While her cargoes will include traditional raw materials such as salt, iron ore, and stone, the company also gave her the ability to handle non-free-flowing bulk material including the capability for cargoes such as wind-turbine blades. 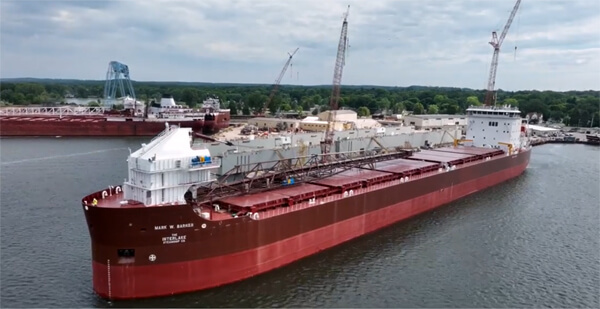 “This new vessel not only brings with it additional cargo carrying capacity and capabilities, it is the most versatile in our fleet and strategically sized to navigate into nearly any port on the Great Lakes,” says Brendan P. O’Connor, Vice President of Marketing and Marine Traffic. “The M/V Mark W. Barker will give us unmatched ability for cargo operations and to carry unique project cargoes because of both her square-shaped cargo hold and larger hatch openings.”

Construction began in August 2019, with the first portion of the hull floated at end of 2020. She returned to the dry dock for the next phase of construction in 2021 before being floated out in October 2021 for her final outfitting. The Mark W. Barker spent the past month undergoing sea trials and final testing to receive her U.S. Coast Guard certificates.