Video: Fincantieri Floats Out Next Generation Cruise Ship for NCL

The Fincantieri shipyard in Marghera, Italy completed the float out of the first of a next generation new cruise ship which is being built for Norwegian Cruise Line. The 142,500 gross ton Norwegian Prima is the first of six vessels the shipyard is building for the brand based on a prototype project developed by Fincantieri.

The float out signifies the completion of the structure of the vessel and external work. This included the applying of the hull art to the vessel, an element of NCL’s brand whereby each of its cruise ships features a unique artwork applied to their hulls. Italian graffiti artist Manuel Di Rita, known commonly as Peeta, completed a work for the Norwegian Prima.

After floating the cruise ship for the first time, Fincantieri repositioned the Norwegian Prima from the dry dock to a fitting-out berth at the shipyard. Work will now continue on the fittings and guest accommodations before she is delivered to the cruise line and commences sailing in summer 2022.

"A ship's float out is always a significant milestone, but this one is particularly special," said Harry Sommer, president and chief executive officer of Norwegian Cruise Line. "Our 18th ship, Norwegian Prima represents an exciting new chapter for our brand and the first vessel to be delivered in our groundbreaking new Prima Class."

The Fincantieri prototype design seeks to increase the outdoor space on the vessel designed to be more open to the sea. For the Norwegian Prima, this means that she offers the most outdoor deck space including a 44,000 square foot wrap-around deck that will feature an outdoor dining venue. The ship also has an infinity beach area and two infinity pools providing ocean views and two of Fincantieri’s signature glass bridges where passengers feel as though they are walking on air over the water. Other elements of the design include a straight-line bow that improves the hull’s efficiency and sea handling capacities as well as a focus by Fincantieri on energy efficiency, with the twofold aim of optimizing consumption at sea and reducing environmental impact while ensuring the vessel is compliant with all the most recent regulations.

The Norwegian Prima and her five sister ships due for delivery between 2022 and 2027 are the first new class of cruise ships for Norwegian Cruise Line in nearly 10 years. Each will measure 965 feet long with a capacity for 3,215 passengers (double occupancy). Due to enter service in the summer of 2022, the Norwegian Prima will offer trips in Europe before repositioning to North America. 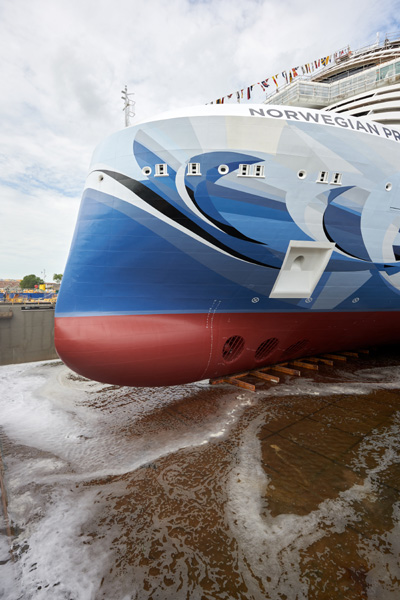