The Indian Coast Guard was again called on to perform a rescue operation due to the persistent heavy weather the subcontinent has been experiencing. The agency tweeted out footage of the rescue of the crew from a coastal cargo vessel on Thursday, June 17.

The Maritime Rescue Coordination Center in Mumbai reported that it received a call Thursday morning from the first mate of the Mangalam, a 2,800 dwt freighter that had grounded south of Mumbai in heavy weather. The region was experiencing strong thunderstorms and heavy rain due to an intensifying low east of India.

The mate reported that the vessel was taking on water in the heavy surf and that the crew of 16 was panicked. The captain was preparing to abandon ship. 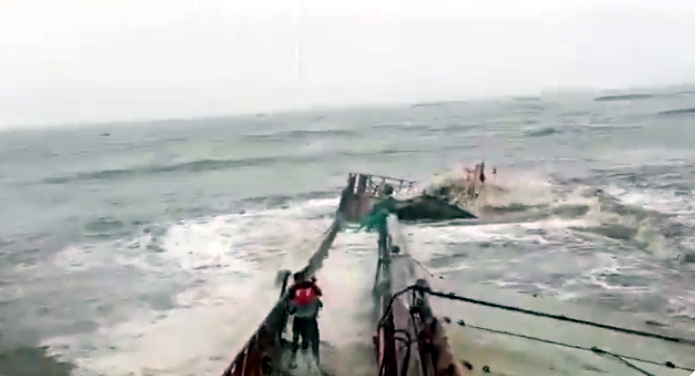 The rescue center instructed the crew to stay aboard their vessel and they dispatched a coast guard vessel along with two helicopters to provide assistance. The coast guard vessel lowered her lifeboats to provide assistance but it was determined because of the heavy surf that they would winch the crew from the deck - which was awash - by helicopter.

All 16 crewmembers were rescued without injury in what the coast guard was calling “a daredevil sea-air coordinated operation.”