Croatian police in cooperation with customs authorities announced their third major seizure of cocaine this year arriving at the port of Ploce smuggled inside containers arriving from South America. Croatian officials said that smugglers appear to be targeting the ports of Southern Europe in response to increased enforcement efforts across Europe.

The most recent seizure came at the end of March when the Dubrovnik-Neretva Police Department, in cooperation with the Customs Administration, seized more than half a ton of cocaine in the port of Ploce. They reported that the cocaine, which had an estimated street value of nearly $70 million, was discovered hidden under a false floor that had been welded into the base of a shipping container importing fruit from Ecuador.

This seizure, which was one of the largest ever in Croatia, is part of a pattern of smuggling detected by the police since the beginning of 2021. The port of Ploce has been under special observation the police said since two drug smuggling rings were uncovered and broken up earlier this year.

Croatian media is reporting that the containers were addressed to companies in neighboring Bosnia-Herzegovina supporting the authorities’ belief that the drugs would have been distributed into Western Europe and were not destine to Croatia.

“We have witnessed German, Dutch and Belgian police seize 20 tons of cocaine earlier this year,” the head of the Dubrovnik-Neretva County Police, Ivan Pavlicevic told Croatian reporters. “We assume that what is coming to Europe these days has been redirected to seaports in Croatia, Greece, and Italy, to bypass seaports in Western and Northern Europe.”

Croatian authorities speculated that Ploce might have been targeted by the smugglers because of its lack of more sophisticated detection methods. The port conducts random inspections of containers and uses dogs to search for contraband entering the port. 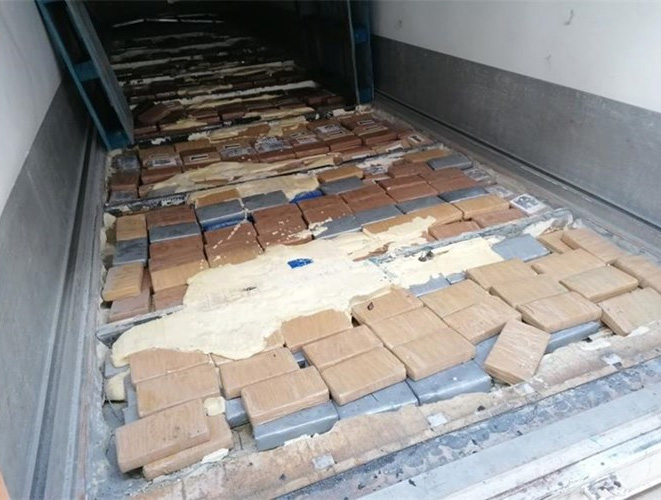 Cocaine was discovered hidden under the floor of a shipping container arriving from South America (photos: PU dubrova?ko-neretvanska)