A Singapore-registered containership had a problem while arriving at the port city of Taichung on the west coast of Taiwan on December 26. Port officials took videos and pictures from the control tower of the port located along the Taiwan Strait as the vessel veered off course sailed bow first into a dock.

The bow of the 12,774 dwt Asiatic Sun was damaged during the allision along with approximately 30 feet of the concrete pier, fenders, and a bollard. The port authority issued a statement saying that the vessel was maneuvering to its assigned dock when it went off course and was unable to stop. No injuries were reported on the ship or on shore.

The 13-year-old containership, which has a capacity of 1.049 TEU, pulled away from the pier with guidance from tugs and repositioned at a different pier in the harbor for an inspection. Images showed the prow buckled under and gashes and scrapes to the hull.

The port issued an order detaining the vessel while ordering the shipowner to pay for an underwater survey of the dock that was to be undertaken today. The vessel, which arrived loaded from the port of Keelung, Taiwan has been instructed to remain at Taichung until the surveys are completed and the owners of the vessel have submitted paperwork for compensation liability for the damages.

Investigators in Taiwan and Singapore are looking into the wind conditions at the port at the time of the accident. Other ships reported strong winds blowing across the harbor on Sunday morning. 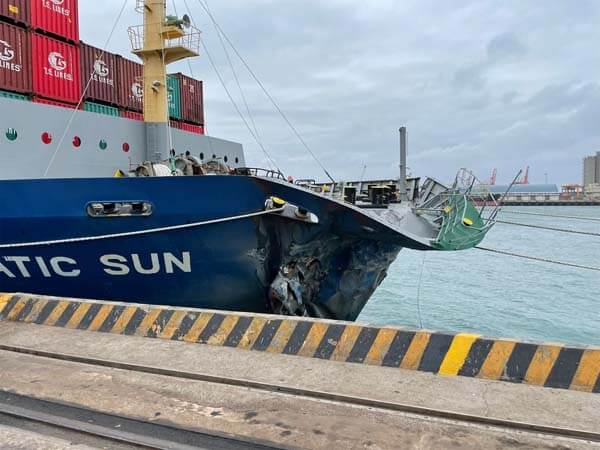