Equinor has started production from the Utgard gas and condensate field, spanning the Norwegian-U.K. border in the North Sea.

It is the first time Equinor leads a field development for recovering resources across the border between the Norwegian and U.K. continental shelves. The field development consists of two wells from a subsea template tied back to the Sleipner field by a pipeline and an umbilical. The template is installed on the Norwegian side of the border, with one well on each side.

Recoverable resources are estimated at around 40 million barrels of oil equivalent (boe) and daily production on plateau will be around 43 000 boe.

The field was discovered in 1982 and a development has been considered several times. In 2016, Equinor acquired the U.K. share of the discovery to realize the development.

The water depth is 110 meters, and the reservoir is located at a depth of around 3,700 meters. Utgard will be remotely operated from the Norwegian Sleipner field, where the well stream will be processed before dry gas is transported to the market through the Gassled pipeline system, and liquids are sent through the existing pipeline to Kårstø for further export to Europe. Utgard will also utilize Sleipner’s facility for CO2 purification and storage.

Gas discovery in the Norwegian Sea

Equinor and its partners AkerBP and Wellesley Petroleum have found gas in the Ørn exploration well south-west of the Marulk field in the Norwegian Sea. Recoverable resources are estimated at 50–88 boe.

The discovery follows several discoveries made in the same area during the past few years, adding considerable volumes in an area with an already developed infrastructure. In June, Equinor announced the Snadd Outer Outer/Black Vulture oil and gas discoveries south-west of the Norne field. Since 2017, Equinor has been operator of or partner in several discoveries in the Norwegian Sea totalling an estimated volume of 200-650 million boe. 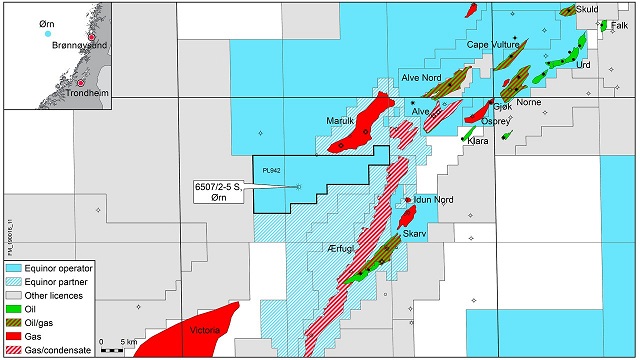