Blue Origin, the space flight firm launched by Amazon founder Jeff Bezos, will follow SpaceX's lead and recover its first-stage rocket boosters on a vessel at sea. Its future landing platform will be the 2004-built, 11,000 dwt ro/ro Stena Freighter.

Historically, commercial launches departing Cape Canaveral have used disposable booster rockets. Depending upon where the payload is headed in orbit, flying the booster back to land after an eastward trip over the Atlantic is not always possible - but landing it on a vessel might be. This innovative approach allows for expensive first-stage boosters to be recovered and reused, thereby reducing the cost per launch. SpaceX has successfully landed its boosters in this manner on a converted, DP-equipped deck barge, and this is key to the firm's plans to keep down cost. 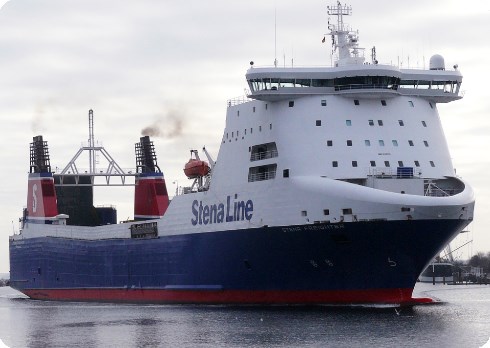 In order to host its own at-sea landings, Blue Origin bought the ro/ro cargo vessel Stena Freighter in August. The ship arrived at the Port of Pensacola, Florida last weekend, and she is scheduled for drydock upgrades before her delivery.

Early reports indicated that the Freighter (left, courtesy Stena) would be used for the pre-launch transport of rocket components, but Blue Origin CEO Bob Smith recently confirmed to GeekWire that she will become a landing pad. Blue Origin plans to launch its first New Glenn orbital-class rocket from Cape Canaveral in 2021, giving time for shipyard conversion work.

The Verge notes that SpaceX was not the first firm to come up with the "landing-at-sea" concept. Blue Origin filed a patent for "Sea landing of space launch vehicles and associated systems" in 2010, well before SpaceX conducted its first booster recovery. However, SpaceX successfully challenged the patent claim by arguing that the idea had already been proposed by others in the past, making it unpatentable.