The vessel is the 33rd Fast Response Cutter (FRC) to be commissioned in the Coast Guard and the seventh to be assigned to Sector San Juan and homeported in Puerto Rico. Lt. Catherine Gillen, is commanding officer. 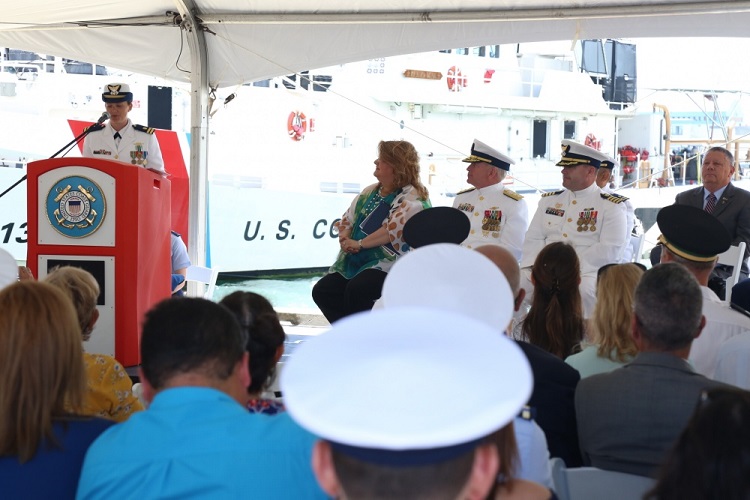 Bollinger Shipyards delivered the vessel to the Coast Guard in March.

The Sentinel Class FRCs are designed to conduct maritime drug interdiction, alien migrant interdiction, search and rescue, national defense, homeland security, living marine resource protection and other Coast Guard missions. The FRC’s are 154-feet long with a beam of 25 feet, and they can transit at a maximum sustained speed of 28 knots. They are armed with a stabilized 25mm machine-gun mount and four .50-caliber machine guns.

Congresswoman Jennifer González-Colón participates as the cutter's sponsor during the commissioning ceremony. "Puerto Rico is now the sector in the Coast Guard with the largest number of fast response cutters," said González-Colón. "I’m honored to be the ship’s sponsor of this beautiful cutter and that it is also commanded by a woman. This is part of the work we do in collaboration with the Coast Guard, and other agencies, so Puerto Rico can have the necessary resources to guarantee the safety of our coasts and combat illegal drug trafficking."

Each FRC is named for a Coast Guard hero who distinguished him or herself in the line of duty. Captain Joseph O. Doyle was born in 1836. On July 11, 1878, he was appointed keeper of the Charlotte, New York Life Saving Station. During 1878, he achieved two impressive rescues. The first was the wreck of the schooner B.P. Dorr of Chicago, which was discovered September 11, 1878. At 9:30 p.m. the ship stranded about one mile west of Doyle’s station. The vessel was visible by the flare of a strong torch on board despite the rain. With the six men and the women on board, the vessel safely and swiftly was returned to the beach under the steady oar of the keeper.

The second rescue in which Doyle showed his great skill and bravery involved the wreck of the schooner Star of Millpoint, Ontario Canada on October 23, 1878. Doyle was awarded the Gold Life Saving Medal for his heroic actions in the conduct of both rescues.