On Thursday, the U.S. Navy released a preliminary report into the events following the collision of the container ship ACX Crystal with the destroyer USS Fitzgerald. The report is a "line of duty" determination, intended only to establish whether the injuries and fatalities that occurred in the collision were due to misconduct or whether they resulted from actions taken in the line of duty. Its authors concluded that all casualties were in the latter category.

The report provides little information on the events leading up to the casualty or the cause of the collision – a much-debated question in the maritime community – but there are several new elements, including the Navy’s values for Fitzgerald’s course, speed and the angle of impact. The Navy timeline asserts that Fitzgerald was making 20 knots on a course of 230, and that ACX Crystal struck her at an angle of about 70 degrees abaft the beam. The vessels’ relative orientation raises new questions in light of the ACX Crystal’s AIS trackline, which shows the container ship headed northeast at the time of the collision.

The Navy formally attributed blame to both vessels. "The collision was avoidable and both ships demonstrated poor seamanship. Within Fitzgerald, flawed watch stander teamwork and inadequate leadership contributed to the collision," Seventh Fleet said.

While detailed information on the cause of the accident will not be available until other investigations are complete, the preliminary report provides an extensive and harrowing account of the events after the collision. This includes a timeline of the flooding of Berthing 2, which killed seven of Fitzgerald's sailors.

At 0130 on June 17, the Crystal's bulbous bow punched a hole in Fitzgerald's hull measuring about 13 by 17 feet, spanning two decks and two compartments. Water quickly flooded Auxiliary Machinery Room 1 and the Berthing 2 starboard access trunk. The trunk was not separated from Berthing 2 and the 35 sleeping sailors inside, and the compartment was fully flooded within 30-60 seconds.

A starboard list made it hard for the sailors to reach the exit scuttle on the port side, which led up into Berthing 1, and they had to fight their way through floating debris and furniture to reach the ladder. The water swiftly rose to the top, but the sailors who had exited the compartment did not close the hatch, and several stayed behind to try to rescue their shipmates. They pulled two more survivors out after the compartment had fully flooded.

Seven others never escaped. All of the casualties had been sleeping in the racks nearest to the starboard access trunk, where the water streamed into Berthing 2. 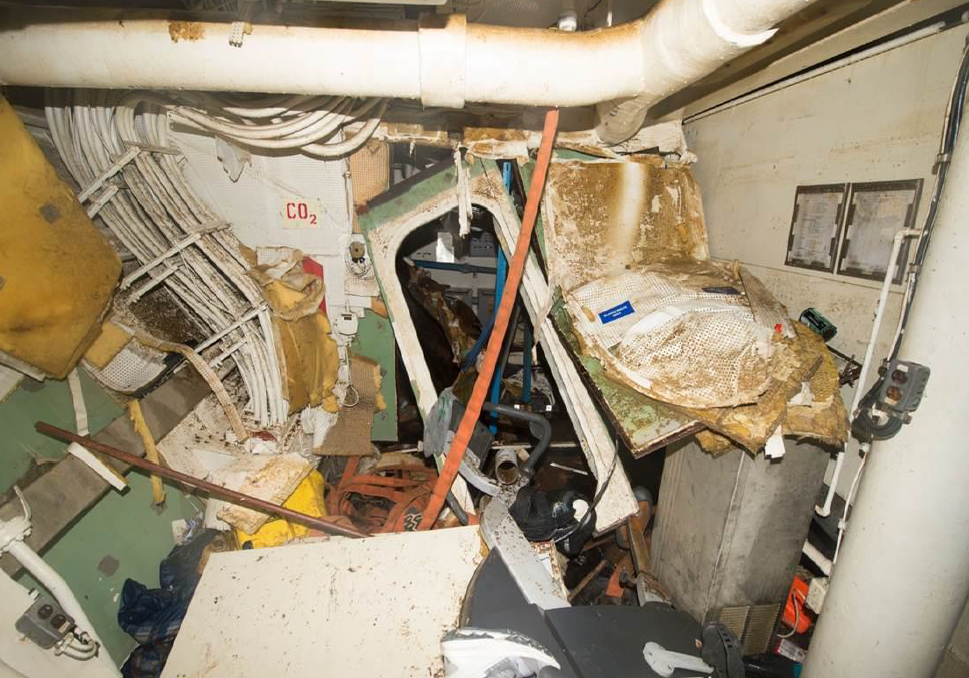 With such a massive breach in the hull, damage control was a critical and challenging task. The Fitzgerald's crew used two pumps and eductors to fight the flooding. Water progressed to other spaces, including Radio Central, Sonar Control, Sonar Control Fan Room, Sonar Control Passageway, Sonar Admin Office, and Combat Systems Equipment Room 1. Main Engine Room 1 experienced minor flooding through piping from AUX 1's tanks, but it was quickly brought under control.

Abovedecks, the bow of the Crystal had torn the outer bulkhead off the commanding officer's cabin and crushed the interior. The C/O was injured and could not get out. He called the bridge for help, and it took five sailors to break down his door and get through the debris to reach him. He was found hanging from the side of the ship, and "the rescue team tied themselves together with a belt in order to create a makeshift harness" to retrieve him.

Help from the Japan Coast Guard and the Navy soon arrived, and Fitzgerald transited slowly back to Yokosuka, where repair and recovery efforts got under way. The report commended the bravery and skill of the Fitzgerald's crew for an effective response. "Ultimately, those damage control efforts and restoration processes succeeded in safely bringing the Fitzgerald into port under her own power," wrote Rear Adm. C.F. Williams, commander of CSG Five.

In addition to the release of the report, Seventh Fleet announced that the Fitzgerald's commanding officer, Cmdr. Bryce Benson, executive officer Cmdr. Sean Babbitt and Master Chief Petty Officer Brice Baldwin have all been relieved of their duties. The junior officers on watch the night of the collision were also relieved due to "poor seamanship and flawed teamwork as bridge and combat information center watch standers." The watchstanders face non-judicial punishment.