An underwater drone that can accurately identify and fire an injection into crown-of-thorns starfish is ready to be put to the test on the Great Barrier Reef.

RangerBot is the world’s first underwater robotic system designed specifically for coral reef environments using only robot-vision for real-time navigation, obstacle avoidance and complex science missions. It is operated using a smart tablet and can stay underwater about three times longer than a human diver doing the same job, working day or night in adverse conditions.

Populations of crown-of-thorns Starfish (Acanthaster planci) have exploded in recent decades, causing huge impacts on the health of the Great Barrier Reef. A single starfish can grow up to a meter wide and eat its own body weight in healthy coral in a single day, with the species believed to be responsible for up to half of all coral loss on the Reef.

Changing water conditions linked to coastal agricultural run-off and climate change are thought to be the main causes of outbreaks. An outbreak is considered to have occurred when there is more than 15 starfish per hectare. 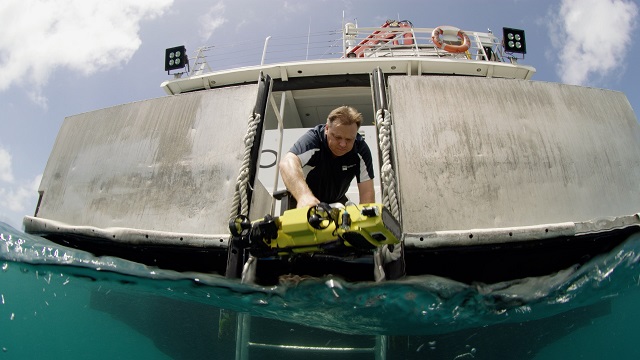 RangerBot can also be used to monitor coral bleaching, water quality, pollution and siltation - other issues plaguing the reef. The concept won the 2016 Google Impact Challenge People’s Choice prize, and the subsequent development project is the result of a collaboration between Queensland University of Technology, Google and the Great Barrier Reef Foundation.

“We’ve ‘trained’ RangerBot to detect crown-of-thorns starfish – and only these coral-destroying starfish – in much the same way as people learn to differentiate between various forms of sea life, said Queensland University of Technology project leader Professor Matthew Dunbabin. Using real time computer vision processed on board the robot, RangerBot can identify the starfish with 99.4 percent accuracy.

“Weighing just 15 kilograms (33 pounds) and measuring 75 centimeters (30 inches), it takes just 15 minutes to learn how to operate RangerBot using a smart tablet,” he said. “Our vision is to make RangerBots readily available and accessible to be deployed on the Reef where they’re most needed and to put them in the hands of reef managers, researchers and communities worldwide.”