Ukraine reported its third Black Sea seaport today for shipments of grain and agricultural crops under the UN’s humanitarian corridor. The first departure from Pivdenny, near Yuzhne, completed the first phase of the program as the first merchant ships have also begun to arrive in Ukraine since February.

"Today, the largest Ukrainian port, Pivdenny, is fully involved in the implementation of the grain initiative. Thus, all the ports of Greater Odesa are used for the export of agricultural products,” announced Ukraine’s Ministry of Infrastructure in postings on social media. The UN agreement covers three ports with departures having resumed last week from Odesa and Chornomorsk.

The Sacura (13,000 dwt) bulker registered in Liberia became the first ship to depart from the third port. She is reportedly carrying 11,000 metric tonnes of soybeans bound for Italy. She clearing the port she joined up with another bulker, the Arizona, which had departed from Chornomorsk carrying 48,459 metric tonnes of corn bound for Turkey. 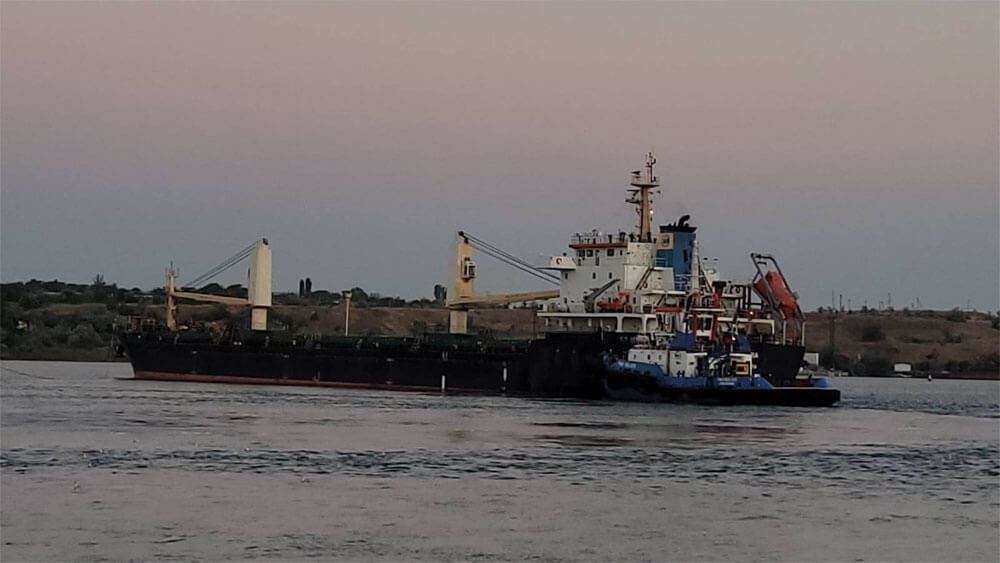 The latest departures brought to 10 the number of ships that have been permitted to sail. Reports indicate that more than 220,000 metric tonnes of corn and grain have been shipped. Other products including soybeans, sunflower oil, and sunflower meal have also begun to ship again. Ukraine is among the largest growers and suppliers of these foodstuffs.

“Currently, our goal is to increase transshipment in ports,” wrote the ministry. “Within two weeks, we plan to reach a transshipment volume of three to five vessels per day.”

Helping to build confidence in the agreement is also news that the first ship arrived in Chornomorsk under the UN deal. The 14,415 dwt Fulmar S. which is owned by Turkish interest and registered in Barbados was cleared by the inspectors over the weekend. She arrived yesterday, August 7, at Chrnomorsk. She was expected to immediately begin loading while a second vessel, the Osprey S., was also cleared by inspectors in Turkey for the inbound voyage to Ukraine. As of late on Monday, her AIS signal shows her off the coast of Romania, possibly waiting for daybreak before proceeding into Ukrainian waters.

Turkey which is playing a key role in the implementation of the agreement is also the first to receive cargo from Ukraine. The Polarnet docked in northwest Turkey today after completing her inspection. She was expected to immediately begin unloading the first cargo which consists of 12,000 metric tonnes of corn.

Officials are hopeful that with the first vessels having completed their Black Sea transits, the process will now become more routine. Last week, Ukrainian officials called for a broader reopening of its Black Sea ports to permit more cargoes to resume but the current agreement only permits grains and foodstuffs.