The Houthi rebels controlling northern Yemen have seized a commercial vessel, accusing it of hostile acts and transporting military equipment and soldiers from the Arab coalition supporting the Yemeni government. The UK monitoring operation in the area confirmed reports of an attack on a commercial vessel, which analysts said would be the first successful attack since 2019 in the area.

UKMTO issued an alert about an attack shortly before midnight on January 2. They placed the vessel approximately 23 nautical miles west of the Ras Isa Marine Terminal. They reported that the investigation was ongoing.

Boasting that they have “acquired a huge naval power,” a Houthi military spokesman conducting a briefing that was broadcast on TV saying that this evening his navy had taken a military cargo ship while it was carrying out hostile activities at sea. The Houthi channel showed pictures of the cargo that is being identified as the Rawabi, a service vessel registered in the UAE. They showed pictures of military equipment, vehicles, naval boats, and heavy weapons saying that this had all been captured with a multi-national crew including Americans and Britons.

I’m guessing it’s this one (RWABEE) as she was heading towards Jizan, Saudi. Took a sudden right turn and has been offline from AIS for nearly 3h now. A small cargo vessel. https://t.co/jc1uXvRXUR pic.twitter.com/p7SdNTWdBl 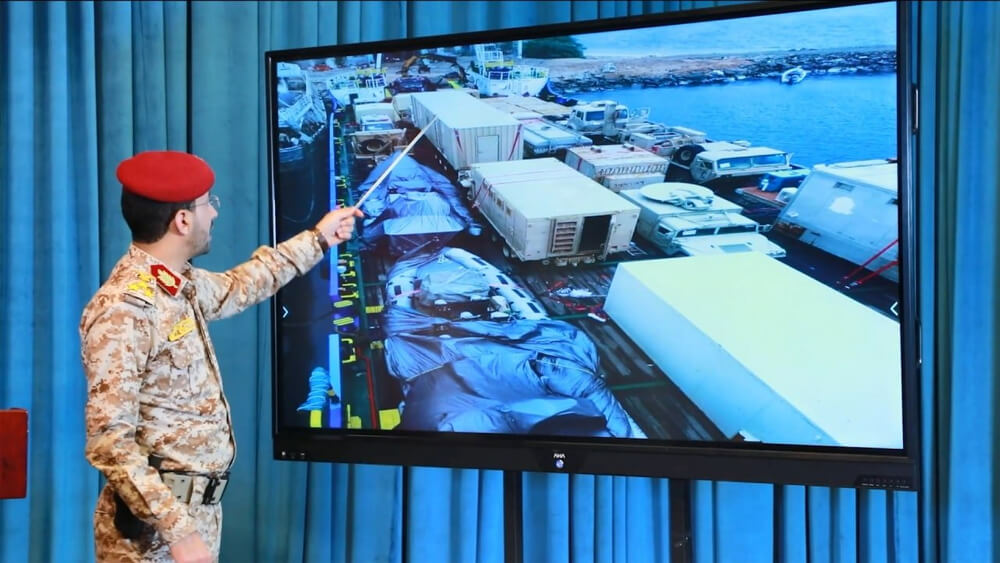 In the video and released photos, the Houthi spokesperson points to images of the decks of the Ro-Ro loaded with trucks and rafts. It appears to be shot by a drone flown over the vessel. The military spokesman said the vessel had been under observation for some time due to the suspicious activities.

Saudi Arabia’s state media also confirmed the reports of an attack on what it said was a commercial vessel carrying medical equipment between the Saudi port Jizan and a hospital in southern Yemen. By some accounts, the vessel, which is a Ro-Ro, had offloaded and was on a return trip to Saudi Arabia. Tanker Trackers reports the vessel's AIS signal has been turned off in November 2021.

The Houthis said the vessel has been taken to the Houthi-controlled port of Salif, north of Hodeidah. The crew is reported to be detained aboard the ship.