U.S. and Spain Work Together to Seize $90M Russian Superyacht

Working with Spanish law enforcement and the Spanish courts, the United States today seized its first yacht owned by a Russian oligarch with close ties to Russian President Vladimir Putin. While it is part of the efforts to increase pressure on Russia after the invasion of Ukraine, the 255-foot luxury yacht is also being linked to an ongoing U.S. case against Viktor Vekselberg with the courts approving the forfeiture of the yacht based on violations of U.S. bank fraud, money laundering, and sanction statutes.

“Today marks our taskforce’s first seizure of an asset belonging to a sanctioned individual with close ties to the Russian regime. It will not be the last,” said Attorney General Merrick B. Garland. “Together, with our international partners, we will do everything possible to hold accountable any individual whose criminal acts enable the Russian government to continue its unjust war.”

The yacht named Tango was built in 2011 by the Dutch Feadship group winning multiple awards for its unique and contemporary design with the exterior being a combination of a white hull with a metallic grey and blue superstructure. Despite Tango's significant size, the shipyard reports that her four engines enable the yacht to reach 22 knots. The accommodations for twelve guests are located on the main deck, while there is a private owners' deck with its own aft seating area, full-beam stateroom, and separate study. A contra-flow swimming pool, a massage/beauty salon, and an outdoor cinema on the sun deck are among the amenities. Tango also has space for 20 crew members.

The U.S. contends that Vekselberg is a prominent Russian businessman with an estimated net worth exceeding $6 billion as the leader of the Renova Group of companies operating in the Russian energy sector and with investments in technology. The U.S. first designated him in April 2018 and further sanctioned him in March 2022, including blocking his luxury Airbus A319-115 private airplane and the yacht each valued at $90 million.

According to the court filing, the U.S. investigation alleges that Vekselberg bought the Tango in 2011 but uses shell companies to obfuscate his interest in the Tango to avoid bank oversight into U.S. dollar transactions related to the vessel. The warrant alleges that Vekselberg continued to make U.S. dollar payments through U.S. banks for the support and maintenance of the Tango and its owners, including a payment for a December 2020 stay at a luxury water villa resort in the Maldives and mooring fees for the yacht. The yacht is currently moored at a shipyard in Palma de Mallorca. 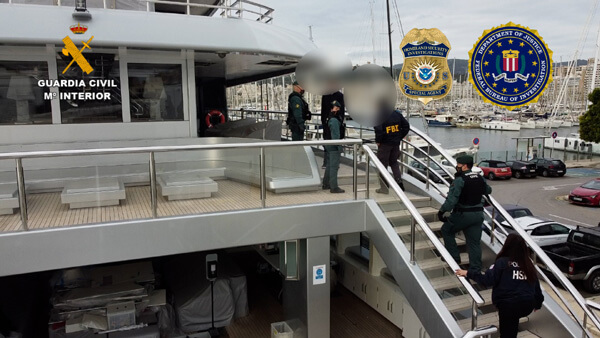 Spanish authorities along with members of the U.S.’s Federal Bureau of Investigations were seen boarding the yacht. The Spanish police reported during the search of the vessel. Various documents and computer devices were seized and will be analyzed to, among other things, confirm the identity of the vessel’s real owner. They pointed out that the yacht flies the flag of the Cook Islands but is registered in the name of a company based in the British Virgin Islands, which in turn is managed by companies in Panama.

At the same time, in separate seizure warrants obtained in the U.S. District Court for the District of Columbia, the U.S. targeted approximately $625,000 associated with sanctioned parties held at nine U.S. financial institutions. Those seizures are based on sanctions violations by several Russian specially designated nationals.