U.S. Secretary of the Navy Asked to Resign

U.S. Department of Defense spokesman Jonathan Hoffman has confirmed that Secretary of Defense Mark T. Esper has asked for the resignation of Secretary of the Navy Richard Spencer after losing trust and confidence in him regarding his lack of candor over conversations with the White House involving the handling of Navy SEAL Eddie Gallagher.

Between September 2018 and July 2019, Gallagher faced court martial specifications for premeditated murder, attempted murder, obstruction of justice, posing for a photo with a casualty and other offenses. During his final deployment in Iraq, Gallagher is alleged to have stabbed a young Islamic State fighter being treated by a medic and then taken a photo of himself standing over the body.

He was acquitted on almost all charges on July 2, 2019, but was found guilty of posing for a photo with a corpse. His trial included an unexpected confession from another medic who had been granted immunity, claiming he was the one who actually killed the victim. Gallagher was sentenced to demotion from Chief Petty Officer to Petty Officer First Class and four months in prison, resulting in him being released for time served awaiting trial. The demotion was later directly countermanded by President Donald Trump.

On Friday, Esper learned that Spencer had previously and privately proposed to the White House - contrary to Spencer's public position - to restore Gallagher's rank and allow him to retire with his Trident pin. Spencer confirmed that despite multiple conversations on the Gallagher matter, Esper was never informed by Spencer of his private proposal.

“Esper's position with regard to the Uniform Code of Military Justice, disciplinary, and fitness for duty actions has always been that the process should be allowed to play itself out objectively and deliberately, in fairness to all parties,” said Hoffman in a statement. “However, at this point, given the events of the last few days, Secretary Esper has directed that Gallagher retain his Trident pin. Secretary Esper will meet with Navy Under Secretary (now Acting Secretary) Thomas Modley and the Chief of Naval Operations Admiral Michael Gilday on Monday morning to discuss the way ahead.'

"I am deeply troubled by this conduct shown by a senior DOD official" said Esper. "Unfortunately, as a result I have determined that Secretary Spencer no longer has my confidence to continue in his position. I wish Richard well."

Esper has proposed to the President that Ambassador Kenneth Braithwaite, current U.S. Ambassador to Norway and a retired Navy Rear Admiral, be considered as the next Secretary of the Navy. 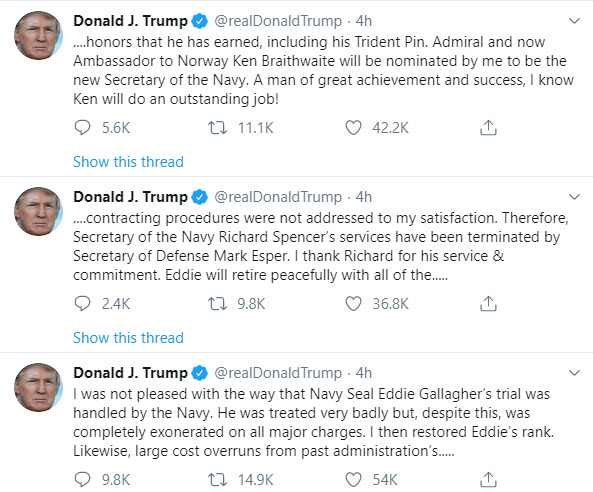