Following two North Korean ballistic missile tests over the Sea of Japan (East Sea), the U.S. Treasury Department has announced new sanctions penalties for a shipping executive who is wanted by the FBI for allegedly smuggling fuel to North Korean buyers in 2018-2020.

“The DPRK’s long-range ballistic missile launches, including over Japan, demonstrate a continued disregard for United Nations Security Council resolutions,” said Brian Nelson, Under Secretary for Terrorism and Financial Intelligence. “The United States will continue to enforce multilateral sanctions and pursue the DPRK’s sanctions evasion efforts worldwide, including by designating those who support these activities.”

The new designations target the owners and operators of the tanker Courageous (ex names Sea Prima, Blue Sea). Treasury asserts that Courageous conducted multiple STS transfers with North Korean vessels and made at least one delivery directly to the port of Nampo, a blatant violation of UN sanctions.

To carry out these activities, Courageous disabled her AIS, carried out nighttime STS transfers in known smuggling areas, and built detours into her route to obscure her true movements, according to the agency. All are common deceptive practices identified in Treasury Department guidance for the shipping industry. 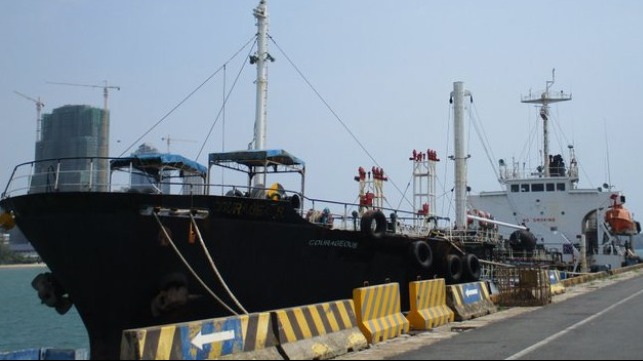 Singaporean national Kwek Kee Seng allegedly arranged the STS transfers from Courageous to North Korean vessels and supervised the tanker during a direct delivery to North Korea. Two companies owned or controlled by Kwek, Anfasar Trading and Singapore­-based Swanseas Port Services, have also been sanctioned in connection with Kwek's activities.

Taiwanese businessman Chen Shih Huan, an associate of Kwek, is accused of helping with these deliveries and paying the crew's salaries. Taiwan-based New Eastern Shipping was the registered owner of the Sea Prima during the period of the alleged sanctions violtions and is also named to the sanctions list.

It is not the first time that the U.S. government has taken aim at Kwek's operations. In April 2021, the FBI announced criminal charges against Kwek alleging sanctions-busting and money laundering. The U.S. government also secured a judicial order to forfeit ownership of the Courageous to the United States, and Cambodian officials assisted in seizing the ship last year.

Kwek's whereabouts are unknown, but if caught and convicted, he faces up to 20 years in prison on each count. He is subject to an outstanding FBI arrest warrant.