The U.S. Ambassador to Greece, Geoffrey Pyatt, announced the reversal of the actions in a Tweet citing recent statements and actions by the Greek shipowners to sever ties with Venezuela. “This delisting action supports the statement that U.S. sanctions need not be permanent.”

The U.S. actions came after a meeting between the ambassador and the president of the Union of Greek Shipowners, Theodore Veniamis. After the meeting on June 16, the UGS issued a statement saying, “Greek shipping confirms its commitment to implementing the U.S. order to ban trade and economic transactions with Venezuela and other countries.”

Representing the Greek shipping industry, the UGS president reportedly committed to the ambassador that they would “continue to urge its members to refrain from conducting any business with Venezuela until there is a change in regime.” Further, he said the organization would continue to inform its members about the imposition of restrictive measures and sanctions, both from the U.S. as well as from the United Nations, against specific countries and “invite its members to demonstrate due diligence in implementing all relevant guidelines.” 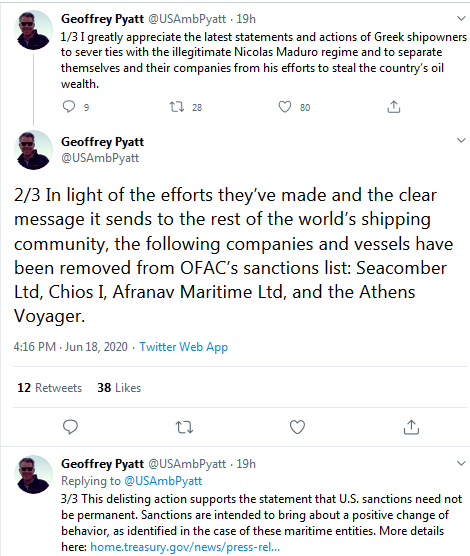 According to the ambassador, the U.S. will specifically be delisting Afranav Maritime and the Athens Voyager, a ship the U.S. cited for having sailed with Venezuelan oil as recently as mid-February. Also included in the action was Seacomber and its vessel the Chios I, a Maltese flagged crude oil tanker that the U.S. cited for sailing with Venezuelan oil as recently as mid- to late-February.

While the U.S. was delisting these two companies, it also designated two additional entities, which the Department of Treasury said loaded or otherwise held Venezuelan-origin crude from late November 2019 to May 2020. The companies cited for operating in the Venezuelan oil sector included Delos Voyager Shipping and Romina Maritime Company.

According to the announcement, the Panamanian-flagged crude oil tanker Delos Voyager loaded approximately 515,000 barrels of Venezuelan crude in mid-January 2020 and delivered it to Qingdao, China in February 2020 as well as a second cargo of 515,000 barrels loaded at Amuay Bay in late March 2020 and delivered it to another vessel near Malaysia in mid-May 2020. The Liberian-flagged crude oil tanker Euroforce was blocked for having loaded approximately 500,000 barrels of Venezuelan crude in mid-March 2020, and transferring the cargo to another vessel in the South China Sea in late May 2020.

The Office of Foreign Assets Control (OFAC) also designated three individuals and eight foreign entities for their activities in or associated with a network attempting to evade United States sanctions on Venezuela’s oil sector. In announcing these latest sanction violations the U.S. said that since at least 2019, the illegitimate regime of Venezuelan President Nicolas Maduro and Petroleos de Venezuela, S.A. (PdVSA) have cooperated with a series of individual including a network established in Mexico to evade U.S. sanctions and assist in the sale of Venezuelan-origin crude oil.

“The illegitimate Maduro regime created a secret network to evade sanctions, which Treasury has now exposed,” said Deputy Secretary Justin G. Muzinich. “The United States will continue to relentlessly pursue sanctions evaders, who plunder Venezuela’s resources for personal gain at the expense of the Venezuelan people.”

These actions are seen as a response to the highly publicized recent Iranian sale of gasoline to Venezuela and part of the Trump administration's ongoing campaign against what it calls the illegal regime of President Maduro.

The United States had recently repeated its warning on shippers on illegal shipping practices warnings that the shippers could face sanctions violations. In February, the U.S. took a similar action designating Rosneft Trading, the Swiss-incorporated oil brokerage division of Russian oil company Rosneft, for operating in the oil sector of the Venezuelan economy. Late in 2019, the U.S. also blacklisted six other vessels for connections to Venezuelan state oil company PDVSA.